Consuming omega-3 fatty acids, particularly the long-chain omega-3s found in fish and seafood, has been associated with significant health benefits, such as reducing cardiovascular disease risk. However, recent national surveys have shown that adults in the United States are consuming significantly less than the recommended amounts of seafood and omega-3 fatty acids. (12)(17)

Omega-3 supplements are widely used to increase omega-3 intake and are recommended for individuals with certain health conditions, such as coronary heart disease. (11) In this article, we cover what you need to know about omega-3 supplements, including omega-3 sources, supplement forms, and product considerations.

What are omega-3 fatty acids?

Omega-3 fatty acids are a type of polyunsaturated fatty acids (PUFAs) with a specific chemical structure that contains a double bond in the third bond of the fatty acid chain. Of the various omega-3s, three have specifically been researched for their health effects: alpha-linolenic acid (ALA), docosahexaenoic acid (DHA), and eicosapentaenoic acid (EPA). (11) Fish provide a primary source of EPA and DHA in the human diet. Many fish feed on phytoplankton, which consumes microalgae, the aquatic organisms that produce PUFAs. (1)(11)

In theory, the essential fatty acid ALA, found in plant-based sources such as nuts and seeds, can be converted to the long-chain fatty acids EPA and DHA in the liver. As a result, EPA and DHA are not considered to be essential to obtain from the diet. However, conversion rates of ALA are generally less than 15%, increasing the need to consume dietary sources of EPA and DHA, such as fish, seafood, and omega-3 supplements. (11) Some of the more important health benefits of omega-3s also come from EPA and DHA, as opposed to ALA, so it’s important to ensure these are included in your diet or supplement plan.

What is omega-3 good for?

Read about the top omega-3 foods on the Fullscript blog. 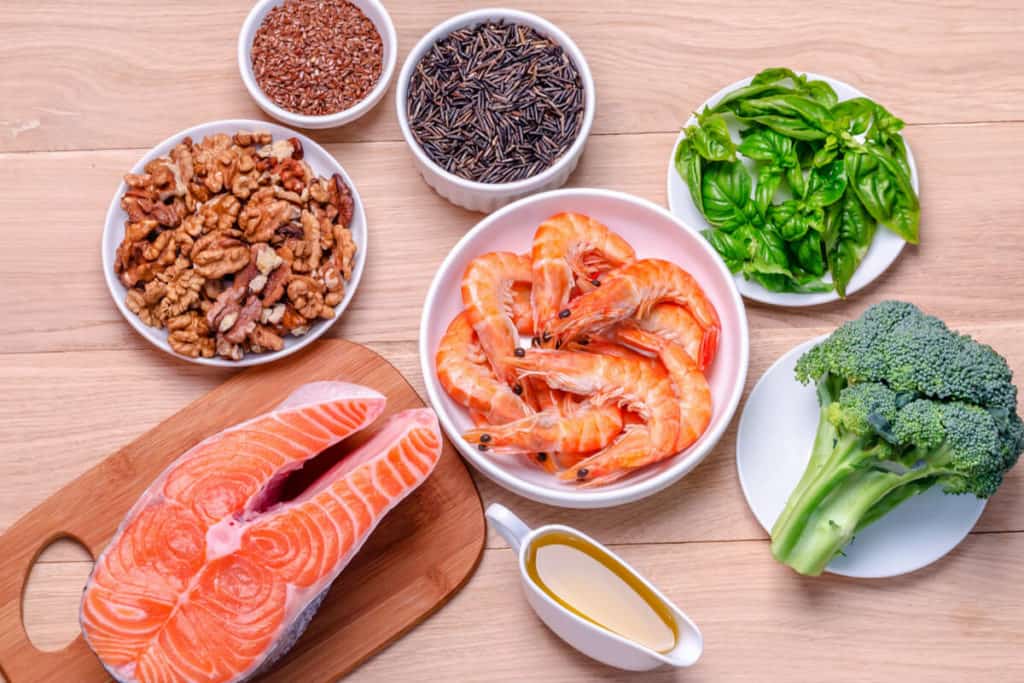 Omega-3 supplements providing EPA and DHA include products made from fish, seafood, and algae. These supplements are most commonly found in liquid, soft gel, or capsule form. Omega-3 supplements can also contain additional ingredients, such as other fatty acids and antioxidants such as vitamin E, which are used to prevent oxidation (spoilage). (5)

Western diets commonly contain a ratio of about 15:1 omega-6 fatty acids to omega-3 fatty acids, which has been associated with an increased risk of chronic diseases, including cancers and autoimmune, cardiovascular, and inflammatory conditions. (14) Omega-6s are found in meat, processed foods, and vegetable oils, which are often consumed in the standard American diet. Along with moderating your intake of omega-6 foods, taking omega-3 supplements is an effective way to help improve your ratio of omega-6 to omega-3 fatty acids. (10)

Different omega-3 sources will provide varying amounts of EPA, DHA, and other nutrients present in a dietary supplement. You will also notice that nutrient composition can vary between brands and products, even when products come from the same source. Check the Supplement Facts label on the product to view the ingredients and the breakdown of omega-3 fatty acids per dose. Regardless of the source, it’s important to speak with your integrative health practitioner to ensure you are getting the right daily dose of EPA and DHA fatty acids. Common omega-3 sources used in supplements are outlined below.

Fish oil is derived from the bodies of a variety of fish, such as anchovy, herring, mackerel, salmon, and sardine. Fish oil supplements generally provide about 1,000 mg fish oil per serving, with approximately 180 mg EPA and 120 mg DHA. Fish oil concentrates are processed fish oil products manufactured to increase the proportion of EPA and DHA. (11)

Supplements containing fish oil have been the most extensively researched for their omega-3 benefits, such as reducing blood pressure, blood triglyceride (lipid) levels, and all-cause mortality from cardiovascular disease. (10) Learn more about the health benefits of fish oils on the Fullscript blog.

Krill oil is produced from krill, small crustaceans similar to shrimp, that feed on algae. A 1,000 mg dose of krill oil contains approximately 112 mg EPA and 63 mg DHA. (6) Krill oil also contains astaxanthin, an antioxidant that has been found to improve lipid profiles in humans. When comparing krill oil vs. fish oil, krill oil may be a more sustainable option, as fish are a limited resource. (16)

For information on plant-based omega-3, visit the Fullscript blog.

The omega-3 content and bioavailability of various supplements varies depending on the ingredient source and form. (11)

There are various forms of omega-3 fatty acids found in supplements, differing based on their manufacturing process, chemical structure, and bioavailability, which refers to the extent to which the active ingredient is absorbed and ready to be used in the body. (7)(11) You may see the terms below listed on labels of omega-3 supplements.

Ethyl esters, a concentrated form of omega-3 fish oil, are produced from natural triglycerides by replacing the glycerol molecule on the triglyceride with ethanol. (11) A study that compared the bioavailability of three concentrated forms of fish oil with natural fish oil, natural cod liver oil, and placebo found that ethyl ester fish oil concentrate supplements resulted in lower EPA and DHA serum levels than the other omega-3 formulations, suggesting that ethyl esters are less efficiently absorbed. (3)

Re-esterified triglyceride (rTG) products are highly concentrated in EPA and DHA. Omega-3 supplements made with rTG are manufactured from ethyl esters by removing the ethanol to release free fatty acids. Fatty acids are then attached back to the glycerol molecule with the use of specific enzymes. (1) This process removes saturated and short-chain fatty acids, resulting in an EPA and DHA concentration of approximately 60%, which is substantially higher than other forms. (3)

In omega-3 supplements sourced from krill oil, 30 to 65% of EPA and DHA is bound to lipid molecules known as phospholipids, rather than as triglycerides. (1) Some studies suggest that omega-3s in phospholipid form are more efficiently absorbed than in other forms. (13)(16)

For example, a randomized open-label trial that examined the bioavailability of krill meal and krill oil vs. fish oil found that phospholipid krill oil had the greatest 72-hour bioavailability. The researchers speculate that this is due to the unique composition of the krill oil. (6)

We’ve identified some best practices to consider when purchasing and using omega-3 supplements. Keep in mind that these suggestions are general, and your healthcare provider is the best resource for you when it comes to individual recommendations.

Certain types of fish have been found to contain potentially harmful levels of environmental contaminants, such as mercury, polychlorinated biphenyls (PCBs), and organochlorines. Studies that have tested fish oil supplements report that levels of these toxins are typically below the detection limit. (9)(15) However, vegan omega-3 supplements, such as algal oil, may have a lower risk of contamination than fish oils. (4)

You may prefer a liquid or softgel delivery format of omega-3 supplements for different reasons. Liquid fish oil is a good choice for individuals who need to adjust the dosage or those who have difficulty swallowing capsules, such as children. If you’re put off by the taste of liquid fish oil, a flavored liquid or a softgel format are potential alternatives.

Compared to liquid omega-3s, softgels are considered to be more convenient and resistant to spoilage once opened. Softgels that are smaller in size will generally contain a smaller amount of fish oil (and therefore a lower dose of omega-3 fatty acids). Conversely, softgels with a higher omega-3 dose are typically larger in size, although this can vary in some cases, such as with fish oil concentrates. Selecting soft gels with a higher concentration can allow you to reduce the size or number of soft gels taken per day. (2)

Research suggests that omega-3 fatty acids may be better absorbed from supplements when consumed with a meal containing fat. (3) This is likely due to the fat content of the meal stimulating the release of bile and digestive enzymes, which emulsify and break down the omega-3s for absorption. (1) Take your omega-3 supplements with a source of healthy fats such as avocado, extra-virgin olive oil, coconut oil, or nuts and seeds.

One common side effect of omega-3 supplements made with fish oil is a fishy aftertaste or burps that smell of fish. Taking the fish oil at the start of a meal and/or taking fish oil soft gels that have been stored in the freezer may reduce the occurrence of fishy burps. Additionally, enteric-coated fish oil pills have been designed to prevent fishy burps by dissolving in the small intestine rather than in the stomach. (2)

Speaking to your healthcare provider about interactions

At higher doses, omega-3 supplements may interact with certain pharmaceuticals, such as anticoagulant medications. (11) Always check with your integrative healthcare practitioner before taking a new dietary supplement.

Store omega-3 products, tightly sealed, away from heat and light to help protect them from spoilage. To prolong freshness, omega-3 supplements can be refrigerated or even frozen without affecting the product’s efficacy. Note that when refrigerated, it is normal for liquid fish oils to become cloudy in appearance, and you should gently shake the bottle before taking the fish oil.

Once opened, a bottle of liquid fish oil is exposed to air and should be consumed within a few weeks. Consider purchasing a smaller bottle size that you’ll finish in that timeframe. (2) For specific storage guidelines, refer to instructions on the supplement product label.

Historically, the human diet contained an equal ratio of omega-6 to omega-3 fatty acids. As our omega-6 intake has increased, so has the prevalence of chronic diseases. (14) Fortunately, taking omega-3 supplements is an effective and generally safe method to increase your omega-3 intake. (11) Stay informed about omega-3 supplements and consult with your integrative healthcare practitioner about which supplements are best for you.