The MIND Diet: An Approach to Preventing Cognitive Decline?

In recent years, we have seen an increase in the average population-wide life expectancy as a result of improvements in modern medicine and healthcare systems. However, with a growing aging population, we are also seeing increases in the prevalence of age-related chronic conditions. (10) Alzheimer’s disease, for example, is an irreversible, neurodegenerative disorder that is currently the sixth leading cause of death in the United States, estimated to affect over five million individuals, nationally. By 2025, this number is expected to increase to over seven million individuals. (6)

There is now a growing body of literature dedicated to examining the role of dietary nutrients in cognition. (4) The MIND diet has been proposed as a possible dietary intervention to address cognitive decline and certain age-related neurodegenerative conditions. 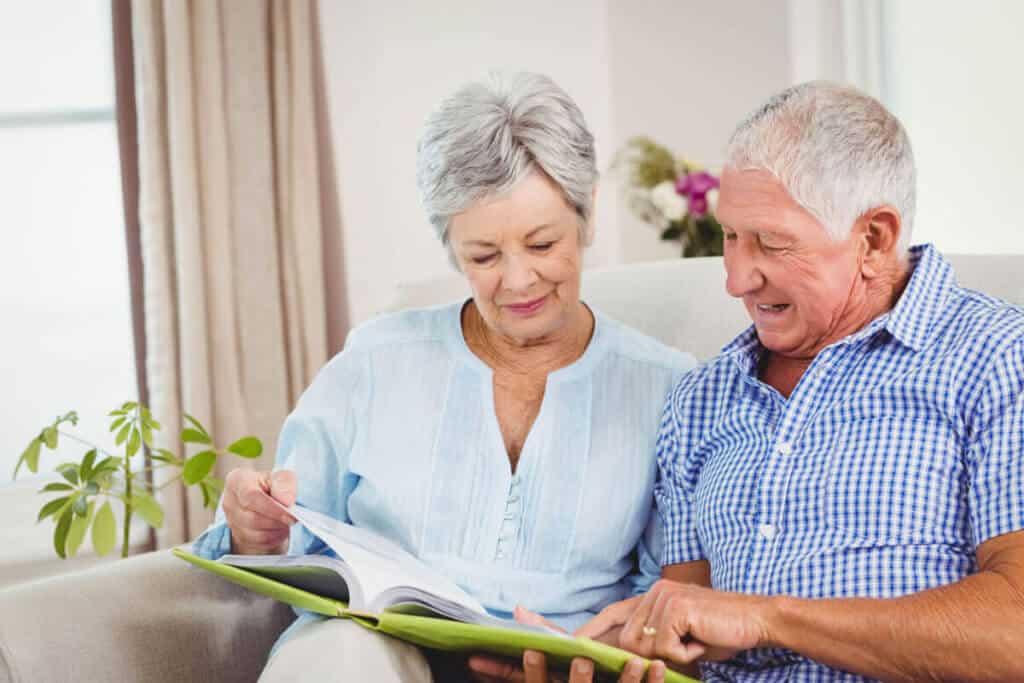 The MIND diet may help reduce the risk of age-related cognitive decline. (8)

What is the MIND diet?

The Mediterranean-DASH Intervention for Neurodegenerative Delay, commonly referred to as the MIND diet, combines components of the Mediterranean diet and the DASH diet, while uniquely emphasizing the intake of neuroprotective foods. (9)

The Mediterranean Diet (MD) is a dietary pattern based on the traditional dietary and lifestyle habits of individuals living in the Mediterranean region. The diet is composed primarily of minimally processed, nutrient-dense, plant-based foods, including cold-pressed extra-virgin olive oil (EVOO), vegetables, fruits, whole grains, legumes, nuts, and seeds. The diet also allows for the moderate consumption of lean meats, fish, dairy, and red wine, white it limits the consumption of red meat, refined and processed foods, and sugars. (5)(12)

Similarly to the MD and the DASH diet, the MIND diet is a plant-based pattern of eating that limits the intake of animal foods and foods high in saturated fat. While both the Meditteranean and DASH diets demonstrate cardioprotective effects that may support cognitive health, they do not specifically emphasize the inclusion of neuroprotective foods. With this in mind, the MIND diet was developed based on results from nutrition literature highlighting dietary nutrients that have been shown to support cognitive health, particularly in the aging brain. (9) 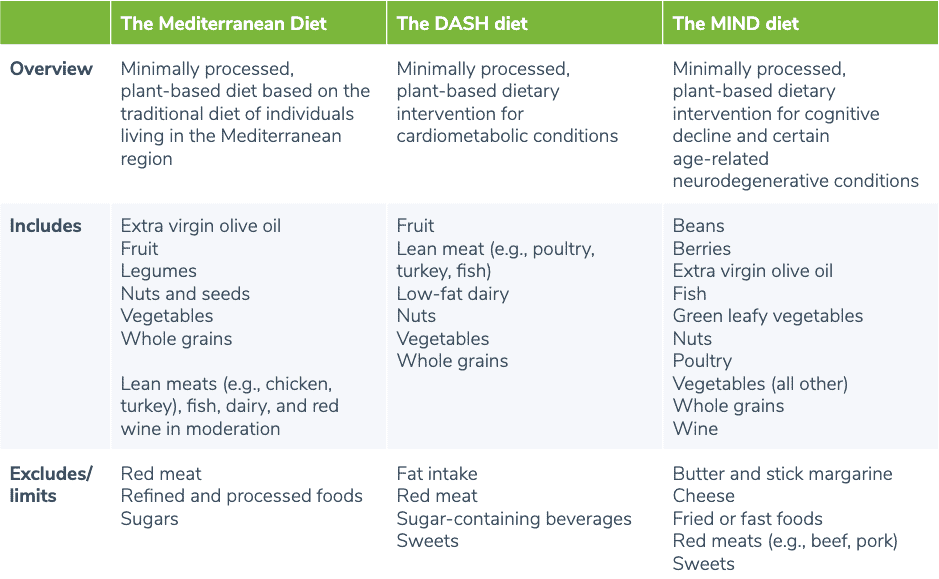 The table above provides a comparison of the Mediterranean, DASH, and MIND diets. (9) Read on to learn more about the benefits and key components of the MIND diet.

Benefits of the MIND diet

Adherence to the MIND diet has been associated with improved cognition (6) and slower rates of cognitive decline. (7)(9) Preliminary research has also demonstrated a reduced risk and slower progression of certain neurodegenerative conditions associated with aging, including Parkinson’s disease (1) and Alzheimer’s disease (AD). (6)

One study examined the effects of the MIND diet in 960 participants of the Memory and Aging Project over approximately five years. Results of the study positively associated this dietary pattern with significantly slower cognitive decline as participants aged. (8) Another study of 16,058 female nurses aged 70 and older found that moderate improvements in verbal memory in later life were associated with long-term adherence to the MIND diet. However, the researchers also noted that future studies should examine the effects of the diet specifically within populations at a high risk of cognitive decline. (2)

A 2015 prospective study compared the effects of the MIND, Meditteranean, and DASH diets on the risk of AD, a form of dementia. In the study, 923 participants between the ages of 58 and 98 were instructed to follow one of the diets over approximately four and a half years. Results of the study demonstrated that high adherence to any of the three diets may reduce the risk of AD. However, unlike the MD and DASH diet, even mild adherence to the MIND diet may have significant protective effects against Alzheimer’s disease symptoms. (9) 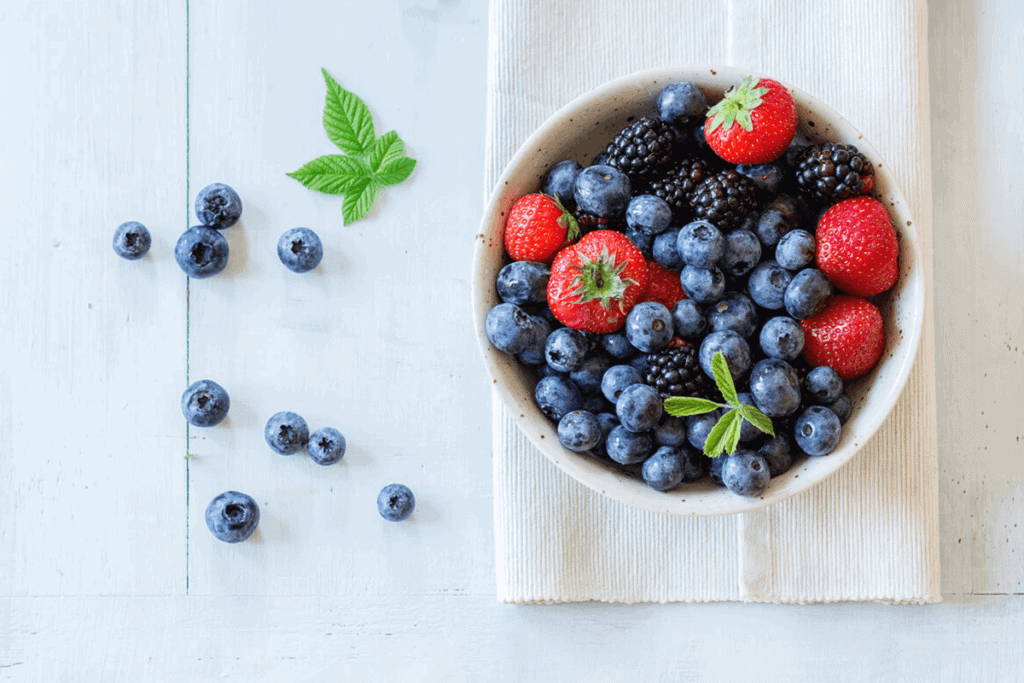 Studies indicate that berry consumption may protect against cognitive decline. (9)

Components of the MIND diet

As previously stated, the MIND diet specifies the intake of certain foods that uniquely support brain and cognitive health, such as green leafy vegetables and berries. (1)(6) This may account for its preventative effects and superior benefits for individuals suffering from cognitive decline, including Alzheimer’s disease and Parkinson’s disease. (1)

15 foods to include and avoid on the MIND diet

Ten foods to include:

Five foods to limit or avoid:

To date, guidelines outlining daily recommended intakes of specific foods on the MIND diet are limited. The following are general guidelines of the MIND diet, with serving sizes based on recommendations from the Dietitians of Canada. 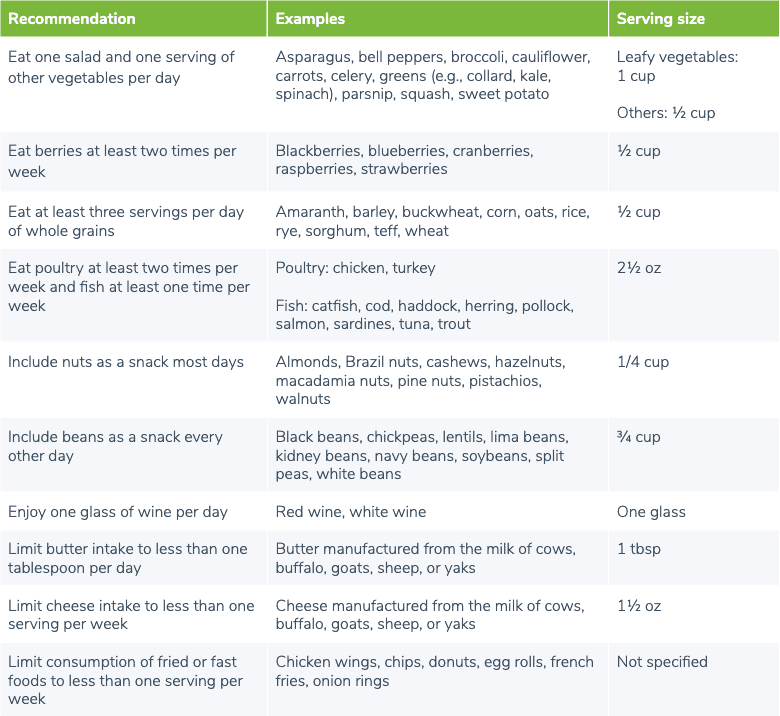 The table above provides general guidelines, examples of foods, and serving sizes for the MIND diet. (3)(6)

With an increasing prevalence of cognitive decline and age-related neurodegenerative conditions, identification of potential therapies, including dietary interventions, is becoming increasingly important. While the results of preliminary research examining the effects of the MIND diet are promising, further clinical trials are necessary to confirm these findings and to better establish dietary guidelines.