Your digestive health, also known as gut health, is intimately related to other aspects of your well-being, such as nervous system function via the gut-brain axis (7) and immune function via the mucosal immune system in the gastrointestinal tract. (3) If you’ve experienced digestive issues, you likely already recognize the importance of a healthy digestive system to your overall health and quality of life.

Understanding how your digestive system works and the factors that can impair digestive health can empower you to alleviate digestive issues.

The human digestive system is responsible for digesting the foods and beverages you consume into substances that are absorbed by the gastrointestinal tract (GI tract) and used by the body. Digestion involves various mechanical and chemical processes that occur in different parts of the digestive system. (16)

The digestive system is composed of the hollow organs of the GI tract, including the:

Additionally, the liver, pancreas, and gallbladder are accessory digestive system organs that support the breakdown of food material by secreting chemical substances, such as digestive enzymes and bile. (15) The following digestive system diagram illustrates the organs found within the digestive system and their roles. 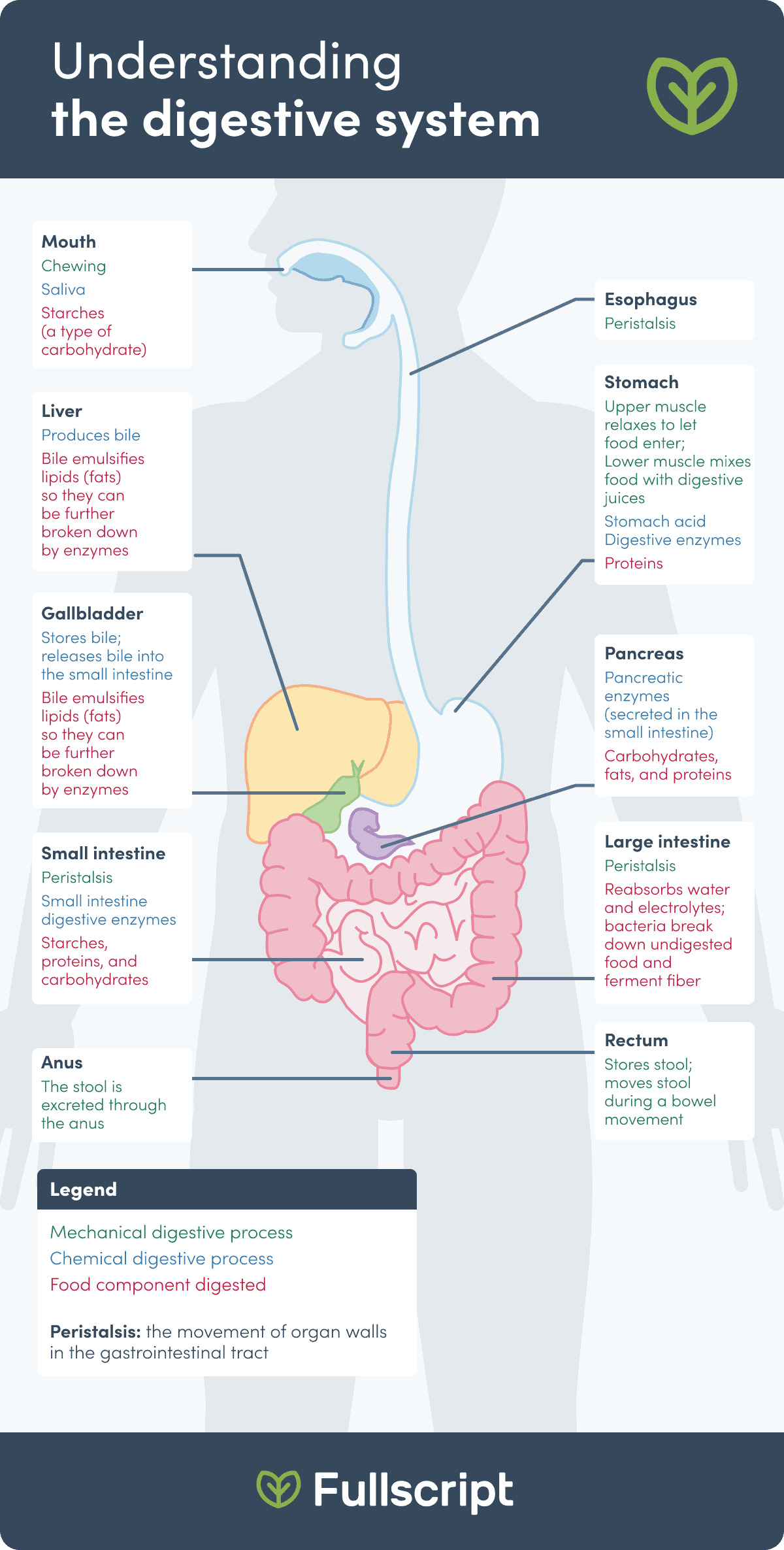 The digestive system organs perform the mechanical and chemical processes of digestion. (15)(16)

Did you know? The term dysbiosis refers to having a disrupted gut microbial community, which can involve an imbalance of microbial strains and decreased overall microbial diversity. (6)(7)(17)

The purpose of digestion is to break down the foods and beverages that you consume into smaller components, which provide your body with the macronutrients, micronutrients, and energy it needs to function and maintain health. (15)

Digestion is said to begin even before the ingestion of a meal, as food preparation and anticipation stimulate the secretion of saliva and digestive chemicals in the stomach. Ingesting, chewing, and swallowing food will begin a cascade of steps as the food progresses through the digestive system. (12)

The digestive system is made up primarily of smooth muscle tissues, which act to contract and relax. A process known as peristalsis, this movement of muscles in the hollow organ walls, pushes food through the GI tract. Mechanical processes, such as squeezing and mixing, help to physically break down food into smaller particles and mix food with digestive secretions in the stomach and small intestine. (15)

Digestion results in simple sugars (e.g., glucose, fructose and galactose) from carbohydrates, fatty acids and glycerol from fats, and amino acids from proteins. Absorption of these and other substances, such as vitamins, minerals, and water, occurs primarily in the small intestine, followed by their distribution throughout the body by the circulatory system. (15)

Bacteria found in the large intestine produce certain nutrients, such as vitamin K, and ferment remaining undigested nutrients in the colon, such as fibers and proteins. (7) The large intestine absorbs water and transforms toxins and waste products from digestion into stool, which is eliminated during a bowel movement. (15)

Did you know? Due to dysregulation of the gut-brain axis in functional GI disorders, they’re sometimes referred to as disorders of gut-brain interaction. (5)

Commonly known as difficulty swallowing, dysphagia can occur due to functional changes that affect swallowing or transporting ingested food through the esophagus. (9)

Constipation is a functional disorder characterized by reduced bowel movement frequency and feelings of incomplete and difficult evacuation. (9)

Functional dyspepsia is characterized by recurring or persistent upper abdominal symptoms, such as early feeling of fullness and epigastric (upper abdomen) pain and/or burning. (9)

Did you know? IBS is a common condition, affecting an estimated 5 to 15% of individuals in Western countries. (1)

There are a variety of other gastrointestinal diseases that are not a result of functional changes in the digestive system. Instead, these conditions may occur due to certain infections or irregular inflammation and immune system responses. (7)(9)

There are a number of different liver diseases, such as chronic hepatitis, cirrhosis, and hepatocellular carcinoma. (9) Liver diseases may be caused by viruses, as in viral hepatitis, or by environmental toxins, such as drug use and excessive alcohol intake. (13)

Inflammation of the pancreas, known as pancreatitis, can be acute (short-term) or chronic (long-term). This condition may result from different factors, such as gallstone formation and the accumulation of environmental toxins in the body. (9)

Peptic ulcers, commonly called stomach ulcers, are characterized by the formation of sores on the lining of the stomach or the duodenum (first section of the small intestine), causing burning or dull pain in the stomach. Having an H. pylori infection and chronically taking nonsteroidal anti-inflammatory drugs (NSAIDs), such as aspirin and ibuprofen, can increase your risk of peptic ulcer disease. (14)

Many factors may contribute to one or more digestive issues, such as: