Major depressive disorder (MDD), also referred to as clinical depression, is a common but serious mood disorder that significantly affects an individual’s feelings, thoughts, actions, and daily functioning. (3)(18)(27) According to the World Health Organization, depression affects more than 300 million individuals or approximately 4.4% of the world’s population, (9) making it the leading cause of disability worldwide. (6)(27)

Depression symptoms may vary between individuals, in order to be diagnosed with MDD, some of the following symptoms must be present almost every day for a minimum of two weeks:

Depression can result in serious consequences, including suicidal ideation and attempts. (3)(18) Approximately 800,000 deaths globally each year are attributed to suicide. (26)

While depression can occur in any individual, the condition is more common in women and typically first presents itself in young adults during their late teens to mid-20s. (3)(27) MDD is believed to be caused by a combination of genetic, biological, environmental, and psychological factors. (18)(27) 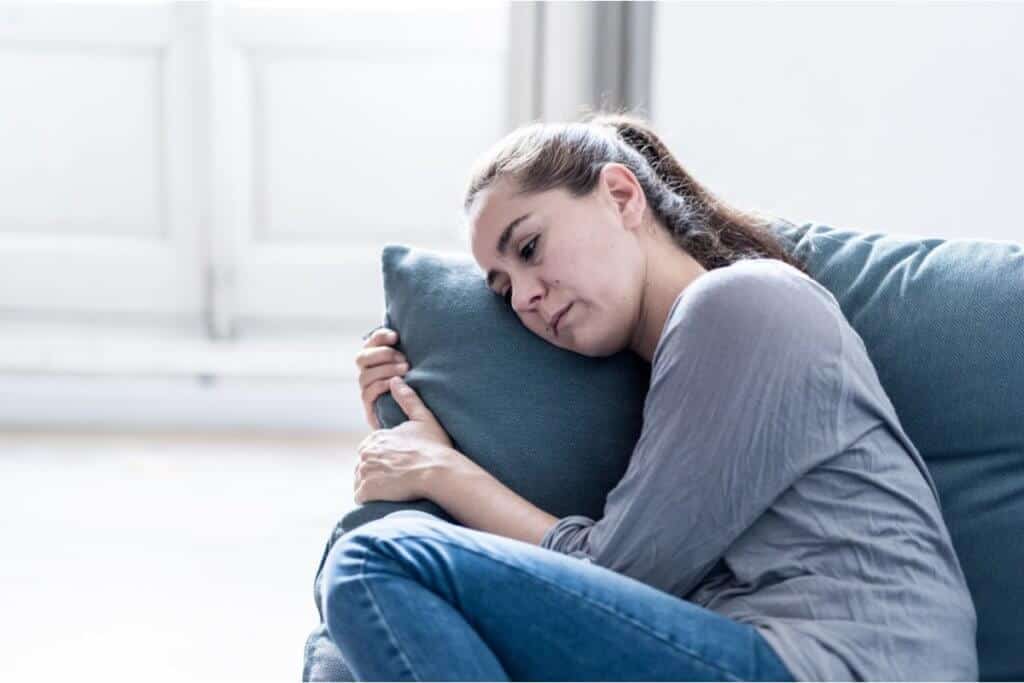 Fatigue and difficulty sleeping are among possible symptoms of depression.

Depression is typically addressed using a combination of antidepressant medications and psychotherapy. Despite the availability of numerous antidepressant agents, many individuals with MDD experience adverse effects, fail to respond to treatment, and continue to experience symptoms. (17)(20) In these cases, patients are often treated with brain stimulation therapies, such as electroconvulsive therapy (ECT). (3)(18) However, there are also a number of evidence-based dietary supplements with antidepressant properties that have demonstrated effectiveness.

Several studies have shown that St. John’s wort (SJW) is effective in the treatment of mild-to-moderate depression. A 2017 meta-analysis examined the use of SJW in patients suffering from depression. Results showed that the effectiveness of SJW was superior to placebo and comparable to selective serotonin reuptake inhibitors (SSRIs), a common class of pharmaceutical antidepressants. (19) Another systematic review noted similar results when comparing the therapeutic potential of SJW to SSRIs, tricyclic antidepressants, and other antidepressant medications. This review also noted that participants receiving SJW experienced fewer adverse effects, results which were comparable to the placebo group. (5) In addition, a randomized, double-blind, placebo-controlled trial conducted over six weeks concluded that 900 mg of SJW (Hypericum extract STW 3-VI) resulted in a longer duration of response and lower relapse and recurrence rates compared to the SSRI citalopram and placebo groups. (23)

Omega-3 polyunsaturated fatty acids (PUFA) may be effective in the prevention and treatment of depression. A 2016 meta-analysis of observational studies associated a higher intake of omega-3 PUFA through fish consumption with a reduced risk of depression. (10) Several meta-analyses of randomized, controlled trials have also noted the benefits of omega-3 PUFA supplementation for individuals suffering with MDD. Supplementation appears to be most effective when formulations contain higher doses of EPA compared to DHA and when used in conjunction with antidepressant medication. (11)(16)(24) Research also demonstrates that adjunctive omega-3 supplementation may improve depressive symptoms related to bipolar disorder without reducing symptoms of mania. (22)

Several mechanisms explaining the antidepressant properties of omega-3 PUFAs have been suggested, including their ability to directly affect membrane properties and decrease inflammation. (6) 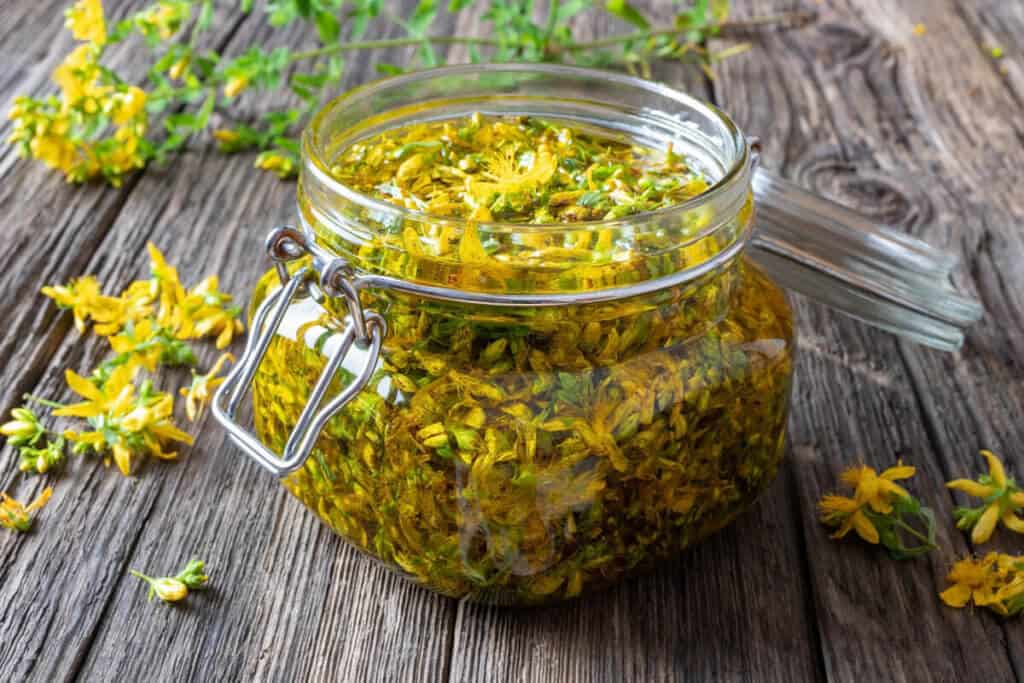 Several studies have shown St. John’s wort to be effective in the treatment of mild-to-moderate depression.

Rhodiola is an adaptogenic herb with anti-stress and antidepressant effects. The therapeutic actions of rhodiola are thought to be a result of its ability to interact with neuroendocrine-immune and neurotransmitter receptor systems involved in depression. (4) A study examining the effectiveness and safety of a standardized extract of rhodiola (SHR-5) in patients aged 18-70 years with mild-to-moderate depression was conducted over six weeks. Patients were randomized into three groups; each participant was prescribed two tablets twice per day of 340 mg per day SHR-5, 680 mg per day SHR-5, or a placebo. Improvements in symptoms, including depression, insomnia, emotional instability, and somatization, were observed in both SHR-5 groups but not the placebo group. (7)

While research demonstrates that rhodiola produces antidepressant effects, according to a 2015 study, rhodiola was not as effective when compared to the SSRI sertraline. However, the study also demonstrated that rhodiola intake was associated with fewer adverse effects and was better tolerated than sertraline. (14)

The antidepressant effects of curcumin, the primary curcuminoid found in turmeric, have been attributed to a number of mechanisms, specifically its ability to affect the HPA axis, monoaminergic activity, and neuroprogression, as well as immune-inflammatory, oxidative, and nitrosative stress pathways. In a randomized, double-blind, placebo-controlled study, 56 patients with MDD were given curcumin at a dose of 500 mg twice daily for two weeks or a placebo. Four to eight weeks post-treatment, curcumin was shown to be more effective in improving mood symptoms compared to the placebo, with more pronounced results occurring in patients presenting with atypical depression. (13)

A second study compared the use and safety profiles of curcumin to fluoxetine, a commonly prescribed SSRI, in the treatment of MDD. Over six weeks, patients received 20 mg fluoxetine, 1000 mg curcumin, or a combination of both. While all groups responded to treatment, response rates were highest in the combination group (77.8%), followed by the fluoxetine group (64.7%) and the curcumin group (62.5%). However, the researchers noted that these response rates were comparable and differences were not statistically significant, providing evidence that curcumin may be a safe and effective treatment for patients with MDD who are not experiencing suicidal ideation or other psychotic disorders. (21)

Crocus sativus, commonly known as saffron, is a perennial herb of the Iridaceae family native to certain countries, such as Iran, India, and Greece. (25) Some studies indicate that the stigma and petal of this herb may produce antidepressive effects. In a six-week double-blind, randomized, placebo-controlled trial, 40 outpatients with major depression were prescribed 30 mg per day of saffron or a placebo. Compared to the placebo, patients receiving saffron had significantly better scores on the Hamilton Depression Rating Scale, a widely used assessment scale for depressive symptoms. (17)

Another study compared the effects of saffron and fluoxetine in the treatment of mild-to-moderate depression. In a randomized, double-blind, pilot study, patients received 15 mg C. sativus or 10 mg fluoxetine twice per day. After eight weeks, C. sativus or fluoxetine demonstrated similar effectiveness. (1) 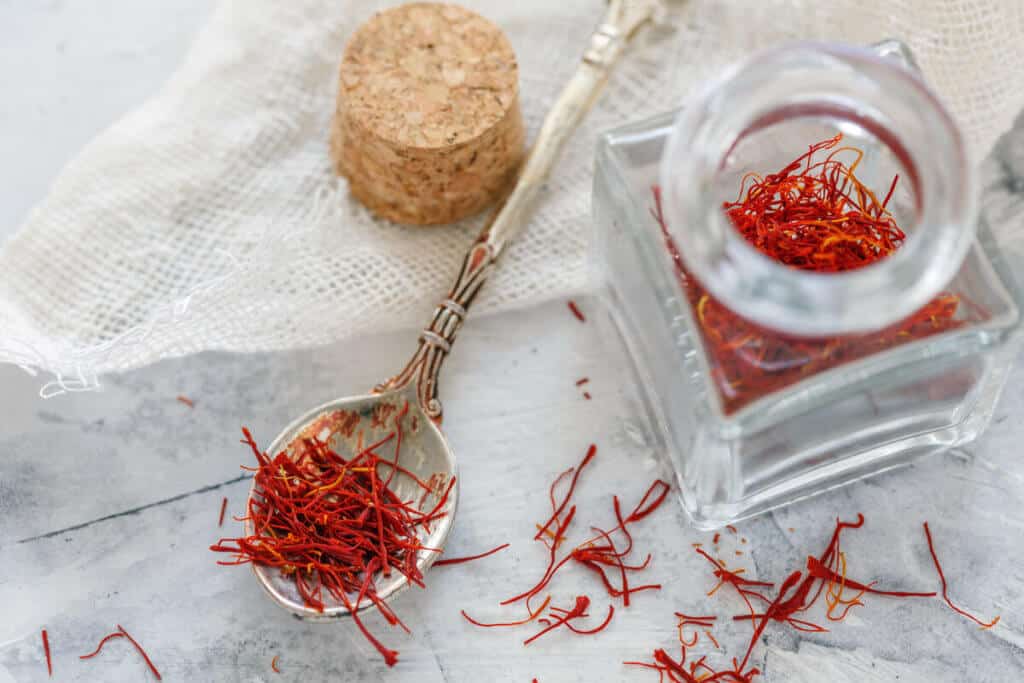 Saffron is a perennial herb of the Iridaceae family native to Iran, India, and Greece.

S-adenosylmethionine, often referred to by its acronym SAMe, is a naturally-occurring compound in the body. As a methyl donor, SAMe plays an important role in cellular metabolism. Research suggests that this compound may be used to address MDD in patients who do not respond to antidepressant therapy. A six-week, randomized, double-blind trial examined the effects of SAMe administered as an adjunct to SSRIs in 73 nonresponders. Results from the Hamilton Depression Rating Scale demonstrated significantly better response and remission rates compared to a placebo. (20)

Another uncontrolled pilot study provided preliminary evidence supporting the use of SAMe as an adjunctive treatment for Parkinson’s disease-related depression. In this study, 800 to 3600 mg of SAMe per day were administered for a period of ten weeks in conjunction with antidepressant medication. Participants who completed the trial demonstrated improvements in depressive symptoms, indicated by the Hamilton Depression Scale. (8)

Imbalances in the intestinal microbiota, known as dysbiosis, have been associated with the development of several health conditions, including depression. Research has, therefore, examined whether modulation of the gut microbiome with probiotic supplementation would improve symptoms in individuals with MDD. Several studies have shown that concomitant use of certain probiotic strains and antidepressant medications may improve clinical outcomes.

Learn more about the clinical applications of probiotics in neurological conditions.

Depression is a serious mental condition affecting a significant portion of the global population. Fortunately, treatment options are available to individuals with MDD, including a number of evidence-based ingredients. Supplementation with omega-3 PUFAs, SAMe, and certain strains of probiotics, as well as the botanicals St. John’s wort, rhodiola, curcumin, and saffron has demonstrated effectiveness on their own and/or concomitantly with pharmaceutical medication.