The Role of Serotonin in Health and Natural Serotonin Boosters

Originally identified in 1948 as a vasoconstrictor (a substance that narrows blood vessels), (9) the neurotransmitter serotonin affects virtually every system in the body. (2) Beyond vasoconstriction, serotonin has been studied for its effects on brain function, mood, digestion, metabolism, and other physiological processes.

This article explores everything you need to know about serotonin and its impacts on health, as well as how to enhance serotonin production through diet and lifestyle.

5-hydroxytryptamine (5-HT), commonly referred to as serotonin, is a neurotransmitter that plays an important role in health by regulating many physiologic processes, most notably nervous system activity. (1)(2) Serotonin is found throughout the body, primarily in the digestive tract, the central nervous system, and a specific type of blood cell called platelets. (10)

How is serotonin produced?

Serotonin, derived from the amino acid tryptophan, (10)(13) is mostly produced in the digestive system by enterochromaffin cells (neuroendocrine cells) and in the brainstem by neurons (nerve cells). (6)(13) Several different enzymes convert tryptophan to 5-hydroxytryptophan (5-HTP) and then to serotonin in the gastrointestinal and central nervous systems. (4)(6)(13)

How does serotonin work?

Serotonin works by binding with the serotonin receptor families 5-HT1 to 5-HT7. (6) There are a variety of cells with these receptors, including a network of neurons in the central nervous system. (6) Amine transporters, such as the serotonin transporter (SERT), then help cells take up serotonin. (15)

Research shows that serotonin’s regulation of physiological processes is complex and extensive, and is believed to help maintain homeostasis (a state of stability), essentially helping the body to adapt to varying conditions. (2)

What does serotonin do in the body?

Serotonin demonstrates different functions depending on the receptor with which it binds. (1) There are 15 serotonin receptor types, which are found in the central nervous system and throughout the body. (2)

Serotonin can be converted to melatonin, commonly known as the sleep hormone. (15) 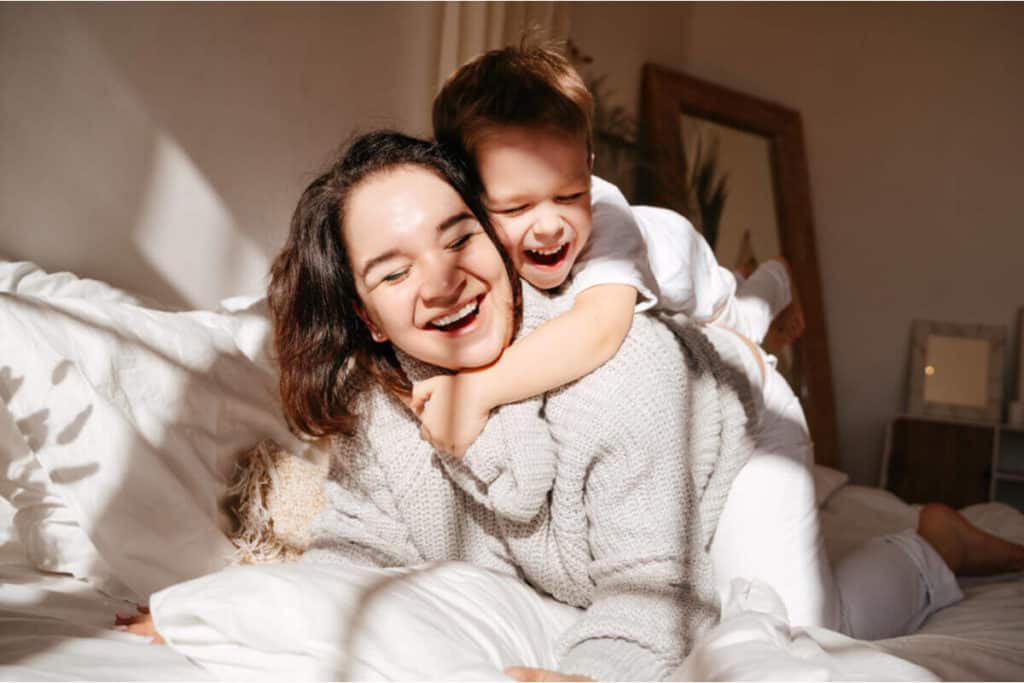 Various antidepressant medications have been developed to interact with serotonin receptors.

Serotonin function is essential to mental health as it regulates and maintains processes such as aggression, behavior, memory, mood, and perception. (1)(2) Dysregulation of serotonin has been associated with the development of neuropsychiatric conditions, including anxiety and depression. (2)(3) However, scientists have not unanimously agreed that serotonin is the sole neurotransmitter involved in these conditions. (1)

Pharmaceutical medications, such as tricyclic antidepressants (TCAs) and selective serotonin reuptake inhibitors (SSRIs), have been developed to regulate the levels and function of serotonin in the body. (1)(2) These medications are commonly used in psychiatric conditions, including aggressive behavior, anxiety, bipolar disorder, major depressive disorder, and post-traumatic stress disorder (PTSD). (1)

The association between serotonin and mood has been demonstrated in studies that are designed to deplete dietary tryptophan, resulting in low serotonin levels in the brain. (6) One proposed mechanism underlying depression is that a deficiency in monoamine neurotransmitters, including serotonin deficiency, causes the disorder. However, as antidepressants affecting serotonin levels are sometimes only partially effective in treating depression, this theory may not fully account for how the condition develops. (6)

Did you know? Depression is estimated to affect 20% of individuals and is the leading cause of disability worldwide. (6)

There are serotonin receptors in regions of the brain involved in memory and learning. Studies have shown that medications that bind with these receptors may support learning and prevent memory impairment, which suggests that serotonin is involved in regulating cognitive behaviors. (6)

Serotonin and gut health are closely connected through the regulation of various digestive secretions and actions. For example, when taste bud cells on the tongue are activated, serotonin is released and interacts with nerves that signal taste information to the central nervous system. Serotonin modulates the movement of food through the gastrointestinal tract and the secretion of pancreatic enzymes, substances that help to break down food. (2) Additionally, dysregulated serotonin signaling is associated with functional digestive disorders such as irritable bowel syndrome (IBS). (2)

Did you know? Approximately 95% of serotonin in the body is released in the gut. (2)

Your digestive system relies on serotonin to regulate many of its processes.

Serotonin may assist in downregulating the innate immune system, which is involved in hypersensitivity reactions. This may prevent symptoms seen in certain immune conditions such as asthma. (1)

Another of serotonin’s many roles is the regulation of metabolic processes such as appetite and satiety (fullness), energy balance, blood glucose (sugar) levels, and temperature control. (7) Research suggests that elevated gut-derived serotonin and genetic variations of the Tph1 receptors are associated with obesity. (4)

An important consideration for women is the effect of certain medications on serotonin levels. Hormonal contraceptives, a common medication used by women worldwide, may negatively affect serotonin by increasing levels of monoamine oxidase, an enzyme that degrades serotonin. This may contribute to adverse effects such as irritability and depression. (11) A study of over one million women in Denmark found that hormonal contraceptive use was associated with an increased risk of depression and the use of antidepressant medication. (11)

Further, serotonin is involved in female reproductive function, pregnancy, and the development of endocrine organs, such as mammary (milk-producing) glands. Pregnant women are found to have increased serotonin levels, which may regulate uterine contractions and vascular (blood vessel) physiology during pregnancy. (2)

Serotonin levels are measured by a serum (blood) test, with levels between 101 to 283 nanograms per milliliter (ng/mL) considered normal. (1) Serotonin dysregulation has been associated with various health conditions. For example, elevated serum serotonin may result in cardiac arrhythmias, while low serotonin levels are correlated with depression and other neuropsychiatric disorders. (1)

The serotonergic system is developed and undergoes changes in utero and early in life. (3) Many factors have been associated with serotonin dysfunction, including:

Certain factors may also be protective by increasing resilience to environmental adversity, including social support and receiving non-maternal care. (3)

How to increase serotonin levels naturally

These results suggest that the relationship between serotonin and mood may be bi-directional, with mood affecting serotonin levels and serotonin levels affecting mood. Methods used to increase positive mood may include recalling positive images and memories from your life, (8) and practicing gratitude, which you can try by keeping a gratitude list or journal. (5)

Bright light exposure may help mitigate the mental health effects of low tryptophan or serotonin. Studies have found that bright light may improve mood in seasonal depression, nonseasonal depression, and premenstrual dysphoric disorder (PMDD). A study that examined the mood-lowering effect of tryptophan depletion in healthy women found that this effect was blocked by exposure to bright light (3,000 lux). For comparison, the light can be over 1,000 lux on a cloudy day (16) and as high as 100,000 lux on a sunny day. (12)

The positive effects of exercise on mental health, including anxiety-reducing and antidepressant effects, may result from the associated increased serotonin function and synthesis in the brain. Several studies have shown that exercise, particularly aerobic exercise, is associated with increased tryptophan levels, which may result in increased serotonin production and improved mood. (16) 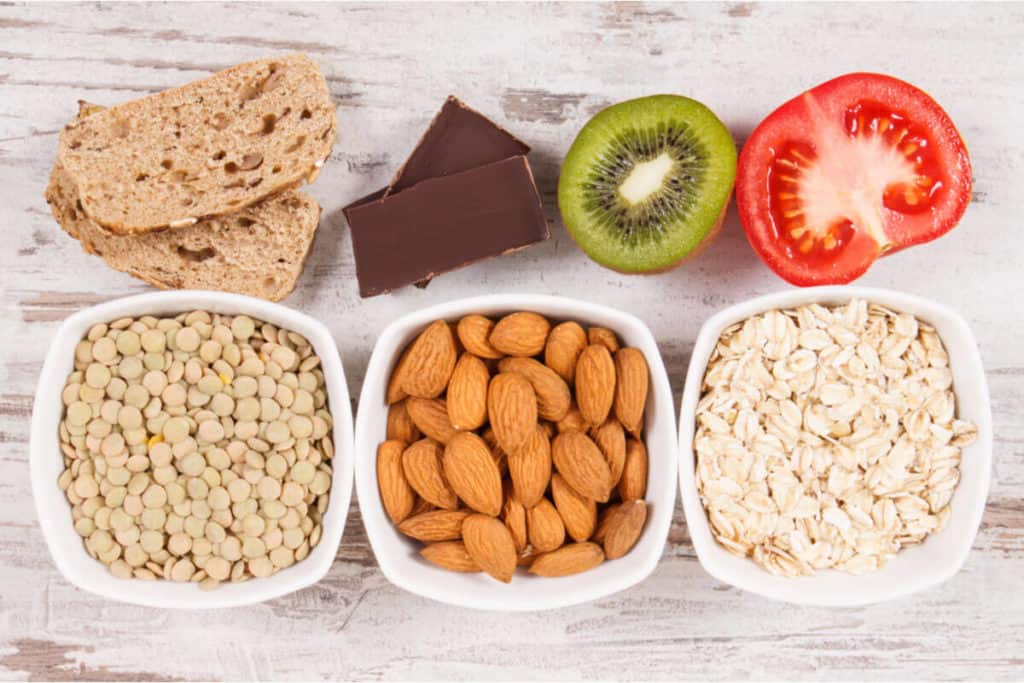 Tryptophan is found in various sources of protein and as a dietary supplement.

Tryptophan, the precursor of serotonin, is considered an essential amino acid because it cannot be produced in the body. Some researchers indicate that tryptophan may compete for absorption with other amino acids. This means that protein intake from foods high in other amino acids may not necessarily increase tryptophan levels in the brain and that foods specifically high in tryptophan may be key to absorption. (16)

Supplements that may alter serotonin levels include tryptophan and 5-hydroxytryptophan (5-HTP). Tryptophan has been shown to increase serotonin in the brain and improve mood and agreeableness in humans. (16) Supplemental 5-HTP, derived from the African plant Griffonia simplicifolia, is known to cross the blood-brain barrier where it increases serotonin synthesis and may treat conditions including binge eating, chronic headaches, depression, fibromyalgia, and insomnia. (14)

It’s important to note that tryptophan and 5-HTP supplementation has been associated with side effects such as diarrhea, nausea, palpitations, and vomiting. There may also be interactions between 5-HTP and certain medications, including antidepressant medication such as SSRIs. (14) Check with your healthcare practitioner to determine if these products are beneficial and safe for you.

What is serotonin syndrome?

Serotonin syndrome is a potentially fatal condition characterized by serotonin toxicity (harmful levels of serotonin). Serotonin syndrome can result from drug interactions or accidental and intentional overdoses of serotonergic medications or illegal drugs such as ecstasy, which increase serotonin levels. (1)(10) Symptoms include altered mental status, tremors, temperature above 100.4°F (38°C), and hypertonia (increased muscle tone leading to stiffness). Serotonin syndrome treatment may require emergency medical attention and can include hydration, discontinuation of serotonergic drugs or medications, and addressing specific complications such as blood pressure and respiratory complications. (10)

Serotonin is essential to regulating many body processes and is involved in the healthy function of almost every body system, including the cardiovascular, gastrointestinal, and nervous systems. (2) Dysregulation of serotonin and its functions has been associated with numerous health conditions. Factors such as nutrition, dietary supplements, exercise, genetics, and medications have been shown to influence serotonin levels. If you are interested in the role of serotonin on your health, speak with your integrative healthcare practitioner for individual guidance.