The Many Health Benefits of Cinnamon

The use of cinnamon, a spice native to Sri Lanka, dates back thousands of years. The Romans used it for digestive and respiratory tract ailments, and in Egypt, it was often used for embalming purposes. (7) Cinnamon is still commonly used and can be found in most kitchen cupboards, but what is cinnamon good for? This warming and subtly sweet spice doesn’t just taste good—it’s also good for you! Continue reading to learn more about the health benefits of cinnamon.

Cinnamon is a spice that comes from the inner bark of several trees belonging to the Lauraceae plant family. There are four main species of this family that are harvested to produce different types of cinnamon, including:

The trees from which cinnamon is produced thrive in tropical and subtropical environments, where some grow large enough to be harvested in as little as two years. Once the tree is cut down, its outer bark is peeled off and often discarded. The inner bark is sliced into strips that, once dried, either curl inwards on their own to form quills (i.e., cinnamon sticks) or are manually layered and wrapped to form a quill. This same inner bark can be dried and ground into the more common powdered form often referred to as cinnamon. (7)

Once harvested and processed, cinnamon can be consumed as a tea by steeping cinnamon sticks in boiling water, incorporated as a ground spice in raw or cooked foods, and inhaled or applied topically as an essential oil.

Did you know that not all cinnamon is created equal? Ceylon cinnamon is native to Sri Lanka, located off the southeastern tip of India, a region previously known as Ceylon before 1972. Ceylon cinnamon is also often referred to as Cinnamomum verum, which in Latin means true, which is why some people refer to Ceylon cinnamon as “true cinnamon.” Its bark is softer, lighter in color, sweeter in taste, and breaks apart more easily than the Cassia varieties. It may also be more expensive and harder to find in retail stores. (18)

By contrast, the Cassia variety of cinnamon that most people have in their cupboards typically comes from China. Cinnamon from Vietnam (Cinnamomum loureiroi) and Indonesia (Cinnamomum burmannii) are similar in profile to Cassia cinnamon. Cassia cinnamon contains a larger quantity of a compound called coumarin as compared to the Ceylon variety, which only contains trace amounts. Many plants contain coumarin which acts as a chemical defense against predators. However, if consumed in large quantities, it can be damaging to the liver. (7)

Cinnamon is a source of antioxidants, contains antimicrobial and anti-inflammatory properties, and may benefit heart health and blood sugar levels.

Provides a source of antioxidants

Cinnamon bark and its oils are rich in over 40 different antioxidants, such as flavonoids and polyphenols. Antioxidants are beneficial to our health because they help to prevent free radical damage to our cells caused by oxidative stress. Free radicals are byproducts of oxygen metabolism. Although they are produced from normal cell metabolism, when they accumulate as a result of exposure to certain external sources, such as pollution, deep-fried foods, medications, and radiation, they can cause oxidative stress, a contributor to cancer, atherosclerosis, rheumatoid arthritis, Parkinson’s disease, and other chronic conditions. (12)(13)

Did you know? Due to its antioxidant content, cinnamon can act as a preservative for food or cosmetics. (11) 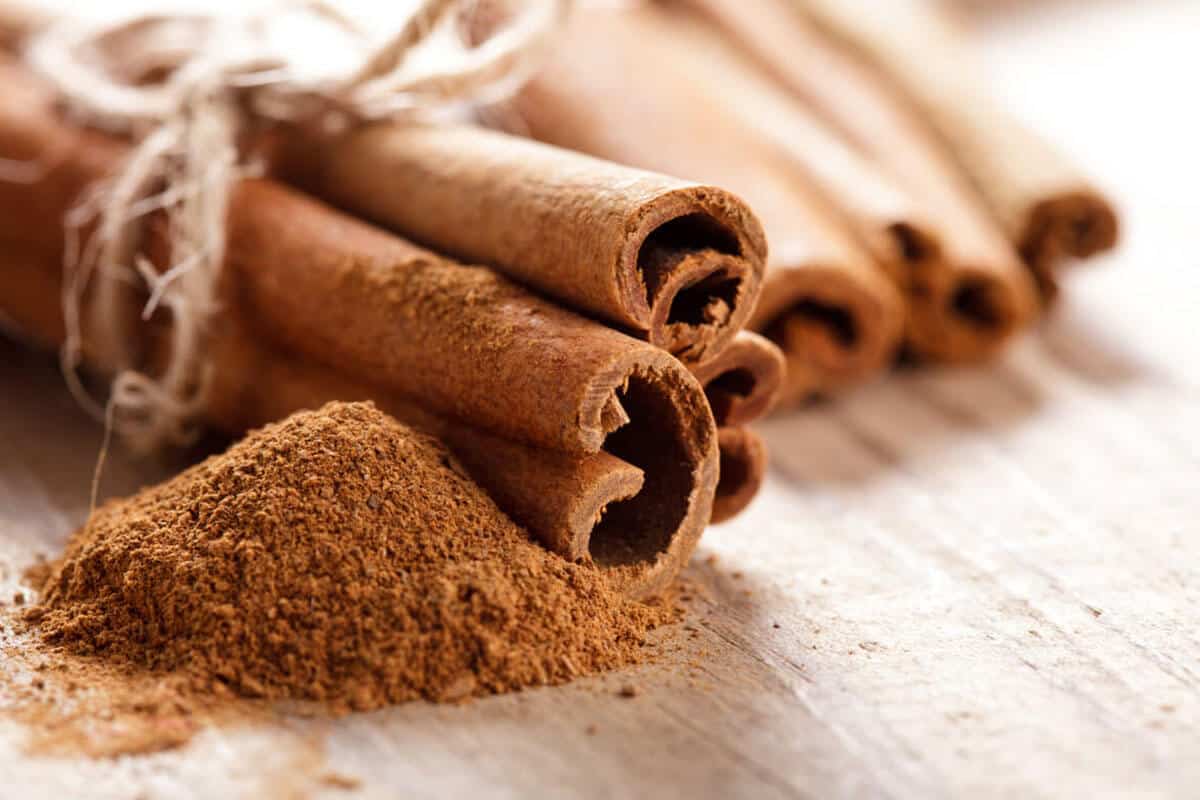 Enjoy ground cinnamon in your baked goods, hot dinners, or even your morning smoothie.

Cinnamon contains antimicrobial properties that help increase the safety and shelf life of food products by preventing the spread of foodborne pathogens and bacteria that can cause food to spoil. (11)

Cinnamon, cinnamon tea, and cinnamon essential oil in particular also contain compounds that are antifungal and antiviral. As a result, cinnamon may help support the immune system and prevent common colds. (17)

Various studies examining the effects of cinnamon and its essential oils have determined that a number of its flavonoids, such as quercetin and hypolaetin, have anti-inflammatory properties. (10)(14)

Another study examined the effects of cinnamon on a variety of disease markers in 36 women with rheumatoid arthritis (RA), a painful inflammatory autoimmune condition that affects the joints. (16) The participants were divided into two groups and either given four capsules of cinnamon (500 mg) per day or a placebo with no cinnamon for a total of eight weeks. Compared to the placebo group, results for the cinnamon group demonstrated a significant decrease in serum levels of CRP (a protein that can help determine inflammation levels or the presence of an infection), diastolic blood pressure, sensitive and swollen joint counts, and scores for Visual Analogue Scale and Disease Activity Score assessments. (15) 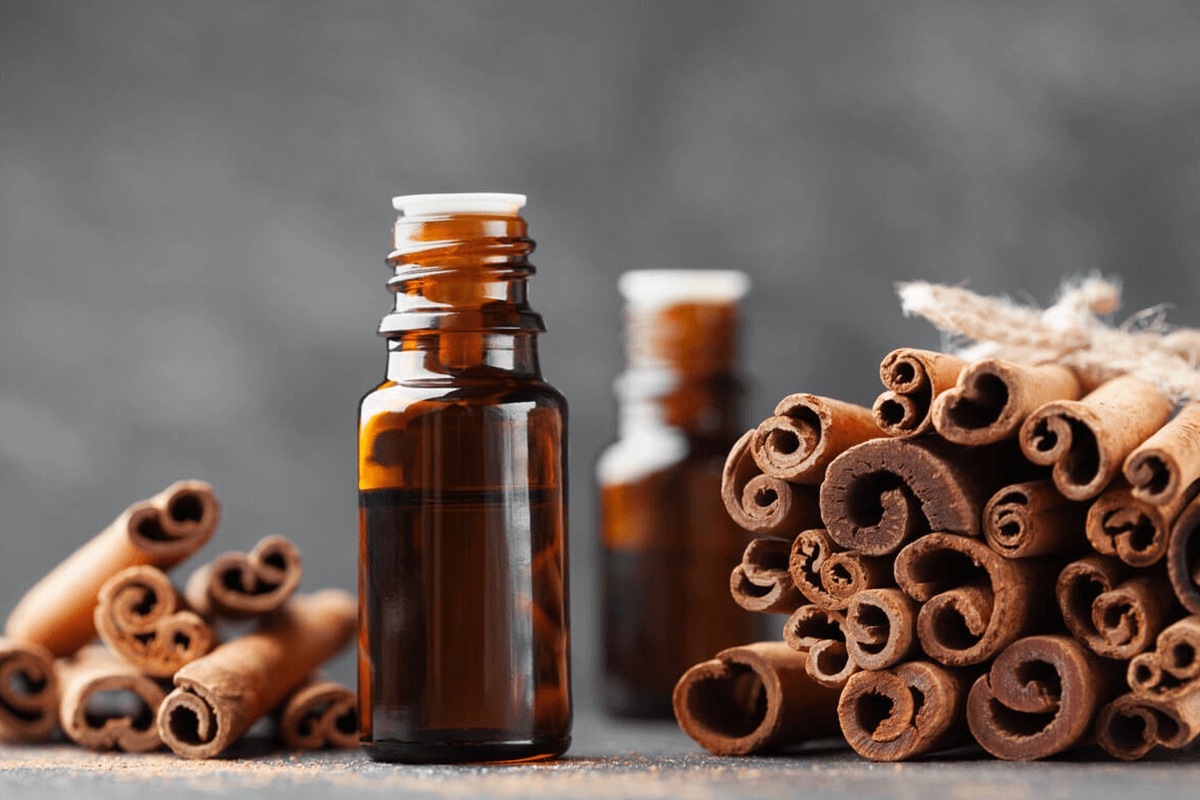 The essential oil of cinnamon bark is much more concentrated than the bark on its own, so less of it is needed to benefit your health.

Several studies have highlighted the protective and beneficial effects of compounds found in cinnamon on cardiovascular health, including cholesterol levels, circulation, and blood pressure. (14)

Some studies have also found that oxidative stress from free radicals contributes to cardiovascular conditions such as atherosclerosis (i.e., plaque build-up in the arteries). Consuming antioxidant-rich foods and spices such as cinnamon may help address or prevent symptoms associated with these conditions. (2)

While additional research is required, there is some evidence that suggests that cinnamon helps slow the rate of sugar absorption into the bloodstream by preventing digestive enzymes from breaking down carbohydrates. (1)

As cinnamon may affect blood sugar levels, talk to your integrative medical practitioner before taking cinnamon supplements if you have diabetes or are taking a medication that lowers blood sugar levels. Cassia cinnamon also contains a compound called coumarin which has been shown to have a negative effect on liver cells. As such, it should be consumed in moderation. Specifically, in 2004, the European Food Safety Authority reported that a tolerable daily intake (TDI) of 0.1 mg of coumarin was appropriate for consumption. (5)

The Canadian Food Inspection Agency conducted a targeted survey that analyzed 747 imported products (e.g., baked goods, cinnamon, spice mixtures, teas) that contained cinnamon for their coumarin levels. Coumarin was detected in 90% of product samples and the levels ranged from 0.2 ppb to 5040 ppb. Health Canada did not consider these levels to be a concern to human health. (3)

Cinnamon is one of the most popular and widely used spices in the world. It has also been associated with a number of health benefits, including addressing symptoms related to inflammatory conditions, oral bacteria causing bad breath, and cardiovascular and blood sugar-related issues. Its spicy-sweet flavor makes it a delicious addition to all types of cuisine.