Skip to content
Thorne is now available in our US and Canadian catalogs!
Learn more

You may already know this: ginger is one of the most commonly used dietary spices in the world and is a member of the Zingiberaceae plant family which includes spices like turmeric and cardamom. (1) Ginger root has been used for thousands of years, primarily for its health benefits in ancient Asia.

During the Roman Empire, ginger gained popularity as an ingredient for cooking and became an important product of trade. Its value continued throughout the years to a point in the medieval era where a pound of ginger was equivalent to the cost of a sheep!

The main part of ginger that is used is the root or rhizome which contains many bioactive components such as the ketone -gingerol. This organic compound is what gives ginger its pungent taste and provides a large number of health benefits. (2) 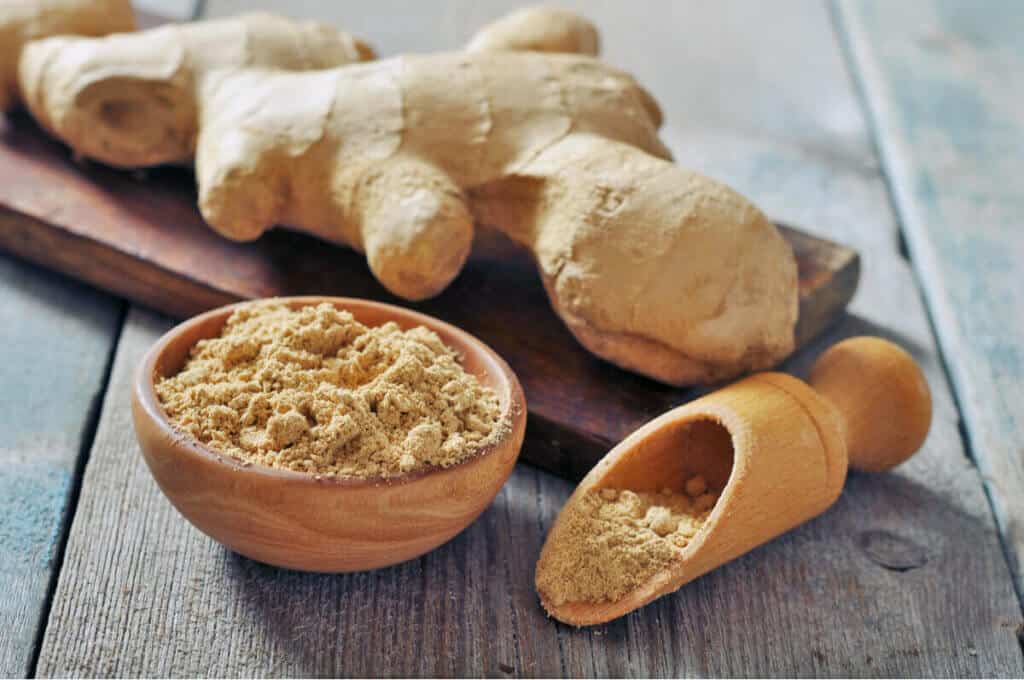 The main part of ginger that is used is the root or rhizome which contains many bioactive components such as the ketone -gingerol.Read on to get to know more about the many health benefits of ginger!

You may be familiar with the sweet, spicy, and peppery taste that ginger contributes to food, but ginger has even more health benefits that you can take advantage of outside the kitchen!

Did you know?
Though similar in name and flavor, wild ginger and the ginger we use in food are not the same types of plant. Consuming wild ginger can be dangerous as it comes from the Asarum plant family which are known for containing the dangerous substance aristolochic acid. The FDA has warned against aristolochic acid as it is nephrotoxic (toxic to your kidneys) and a carcinogen (cancer-causing agent). (3)

One of the most well-known benefits of ginger is its ability to relieve nausea. Generally speaking, this benefit is thought to be due to ginger’s ability to help get rid of intestinal gas by encouraging your stomach to empty. (4) However, other studies show the reduction in nausea is caused by positive effects on your body’s central nervous system. (5)

For those suffering from morning sickness, ginger has been shown to reduce nausea and vomiting with less drowsiness than standard dimenhydrinate (aka Gravol or Dramamine) treatment. (6) A recommended dose of 250mg taken every 6 hours (about 3 – 4 times a day) is suggested to improve these symptoms or when trying to manage motion sickness. (7)(8)

Of late, the anti-emetic (anti-nausea) benefits of ginger are being applied to counter the side effects of chemotherapy treatment. (5) To reduce nausea associated with chemotherapy a higher amount is typically suggested. (9) Historically ginger has been found to be safe when used for cooking and in smaller amounts. However, more research is needed to assess if there are any negative side effects when larger doses of ginger are used as a medical treatment.

Similar to the effects of curcumin from turmeric, research suggests ginger may have anti-inflammatory and analgesic (pain-relief) health benefits. The gingerols in ginger interact with a protein receptor in your body called TRPV1 (transient receptor potential cation channel subfamily V member 1). (10) Ginger activates the TRPV1 receptor in a way that desensitizes its actions; TRPV1 is typically activated by heat and pain stimuli and reacts by causing your body to feel scalding heat and pain.

There are two studies that have shown ginger reduced pain for a group of patients suffering from osteoarthritis when compared to no intervention or placebo. (11)(12) Similarly, a double-blind study of women suffering from dysmenorrhea (period cramps or a painful period) found they received relief comparable to standard pain relief medication such as ibuprofen when taking ginger supplements (250mg capsules). (13) 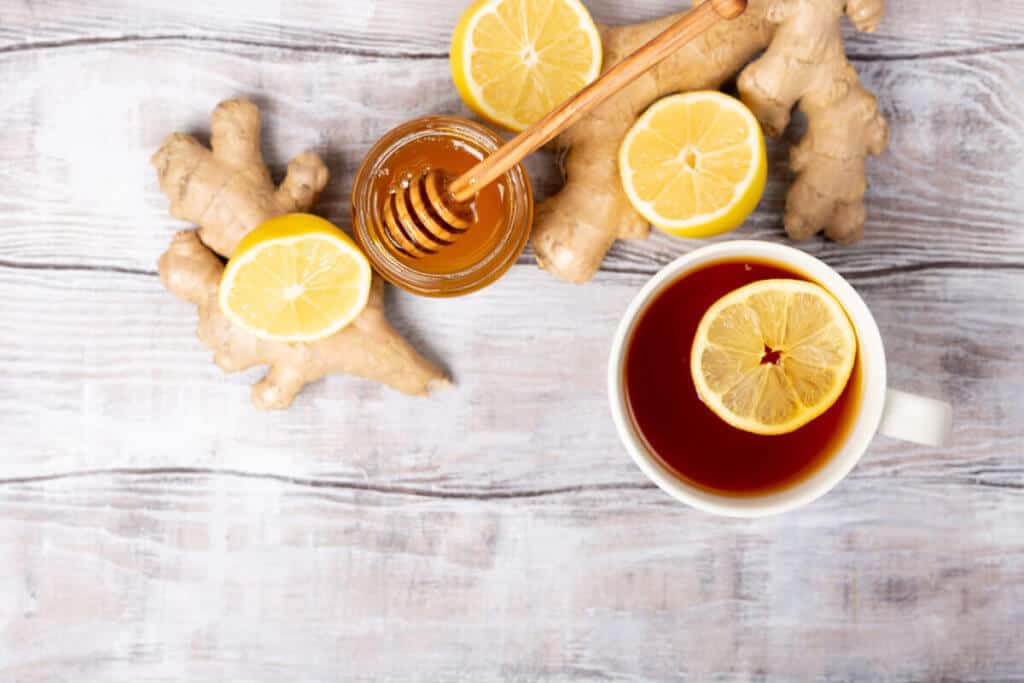 To make a cup of ginger tea, add about 1g freshly grated ginger to 150mL of hot water and let it steep for 5 – 10 minutes. For some extra flavor add lemon and honey!

For those who are at a high risk of heart attack, particularly if they have experienced one before, acetylsalicylic acid (ASA, aspirin) can be recommended as an important part of their preventative treatment. (14) Individuals with a cardiovascular event risk often have plaque build-up in their arteries and this encourages blood clotting (thrombosis). The resulting clots reduce blood flow which can lead to a heart attack or other dangerous cardiovascular events. Aspirin, often referred to as a blood thinner helps lower this risk by preventing platelets (a component of blood that forms clots) from clumping together and creating a blockage.

Similar to aspirin, ginger has properties that reduce clotting and help with cardiovascular health. A small study of men who ate regular amounts of butter (which increased clotting) saw reduced platelet activity when they supplemented their diet with ginger. (15) This — along with a study on synthetic gingerols — showed that ginger was able to inhibit platelet aggregation and suggests further studies into ginger as a preventative treatment for cardiovascular disease may prove to be beneficial. (16)

How to use ginger at home

Now that you are aware of all the benefits of ginger, why not try incorporating this flavorful spice into your diet?

If you are not familiar with ginger, the fresh root can typically be found at your local grocery store in the vegetable section, often sold by weight. When selecting ginger, break off the size that you need as the pieces you find in the grocery store can be quite large. If the ginger root is fresh, it should snap off quite easily and the skin shouldn’t appear too wrinkled. If you prefer not to use fresh ginger root, you can also purchase it dried, crystallized (candied), powdered or minced in jars.

If you cook with ginger a couple of times a week, store any leftovers in an airtight container in the fridge. Alternatively, if ginger appears less frequently in your meals, you can freeze the leftover pieces. Just remember that if you are setting aside leftovers to store, you should leave those pieces unpeeled so they last longer. 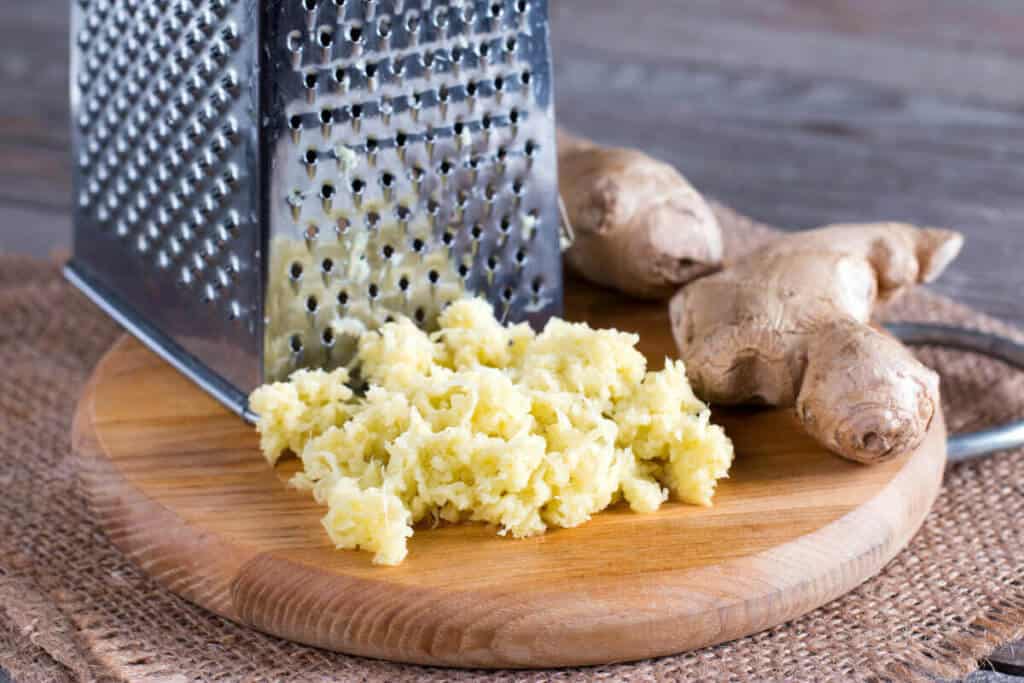 You can easily grate ginger to add it into teas and other foods that you are preparing.

When preparing fresh ginger root, start by scraping off the skin which can be easily done using the back of a spoon. If you find it easier you can use a knife to shave off the sides so that you create a simple block that may be easier to chop. Another easy way to prep ginger is to grate the root once the skin has been removed.

With your chopped or grated ginger, you can now incorporate the spice into a large variety of foods! Some things you can use ginger for include:

Though the age of the spice trade is long gone, ginger remains an ingredient many are eager to get their hands on. Whether it is improving the flavor of your food or adding nutritional value to your health, ginger really is a jack-of-all-trades spice!