The Health Benefits of Laughter Yoga

Have you ever noticed that after having a good laugh, you feel lighter, more energized, and just overall better—both emotionally and physically? That’s not just your imagination. Laughter really does have physical and emotional benefits, and in the past few decades practices have been developed in an attempt to harness those benefits. (13) One such practice, laughter yoga, has followers around the world who swear by its effects. In this article, we’ll explore the concept of laughter yoga, delve into laughter yoga benefits, and explain some laughter yoga exercises that you can try for yourself.

What is laughter yoga?

Generally, when we laugh, it’s for a reason—a friend’s well-timed joke, a funny movie, or an evening watching our favorite comedian. This is called spontaneous laughter. It’s the type of laughter we enjoy naturally in our daily lives. Laughter yoga, on the other hand, employs what’s referred to as non-spontaneous laughter, or laughter that’s not comic or based on logic. It’s laughter by choice, so to speak.

Developed in India in 1995 by medical doctor Madan Kataria, laughter yoga has since spread to more than 100 countries, according to Kataria’s Laughter Yoga University. (8) 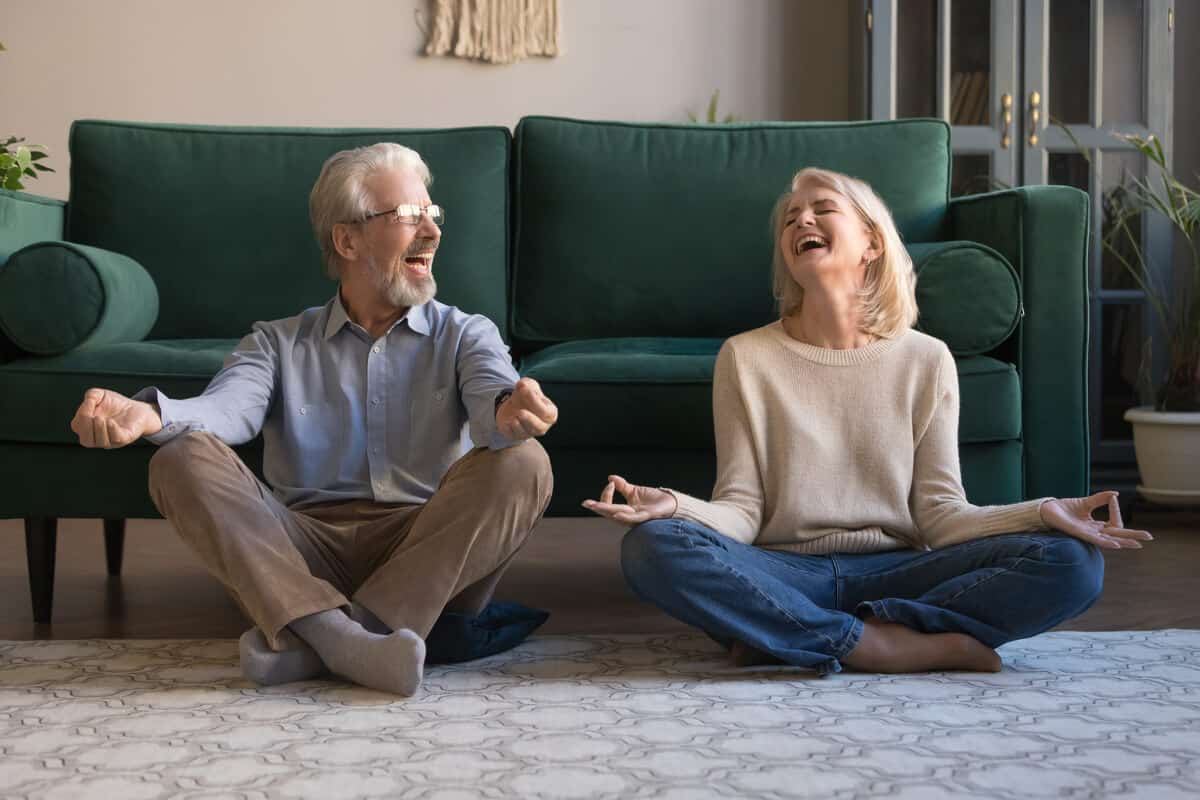 Laughter yoga employs what’s referred to as non-spontaneous laughter or laughter by choice.

Dr. Kataria explains that laughter yoga entails more than just laughing. It is a practice that consists of four steps:

Laughter yoga is often performed in a group setting, where laughter can be contagious. (8) But it can also be practiced at a distance, either in an online group or by watching laughter yoga videos on your own or with others.

Laughter yoga is built on the premise that laughter improves well-being. We know that laughter decreases stress-producing hormones including cortisol and epinephrine in the blood, for instance. (2) But the health benefits of laughter extend beyond mood. Plenty of studies have suggested that laughter has a positive effect on various conditions, including diabetes, cancer, mental health disorders, cardiovascular disease, and more. (7)(13) One recent study even found that laughter may prevent death from any cause. In an older Japanese population, those who reported laughing out loud more frequently had better cardiovascular health and were less likely to die of any cause during the course of the study. (10)

But while there’s an abundance of research on the health benefits of laughter in general, studies on the health benefits of laughter yoga specifically are more sparse. Still, there is some research backing up it’s benefits for certain conditions, including depression, anxiety, and even type 2 diabetes and irritable bowel syndrome (IBS). Let’s look at some of the conditions laughter yoga has been shown to help address.

Perhaps not surprisingly, given how laughter can lift mood, laughter yoga has been shown to provide significant improvements in depressive symptoms. People suffering from depression typically demonstrate lower levels of neurotransmitters like norepinephrine, dopamine, and serotonin. Since laughter can affect dopamine and serotonin activity and stimulate the secretion of endorphins, it makes sense that it would be helpful for people who are depressed. (14)

In one systematic review of experimental studies published between 1995 and 2017, researchers found that laughter yoga helped ease depressive symptoms. However, the authors cautioned that while the results look promising, they’re not conclusive. More research is needed to determine how laughter yoga compares to other group-based therapies for depression. (3)

In modern society, stress is a common experience, and we’re always on the lookout for ways to help reduce it. Laughter yoga may be an affordable and accessible way to address the negative effects of stress, according to one study. Researchers assigned 35 healthy study participants to either participate in a laughter yoga session, a relaxation breathing session, or no intervention before facing a social stress test. The people who engaged in laughter yoga, but not those in the control group or the relaxation breathing group, demonstrated a reduced cortisol stress response. (9) 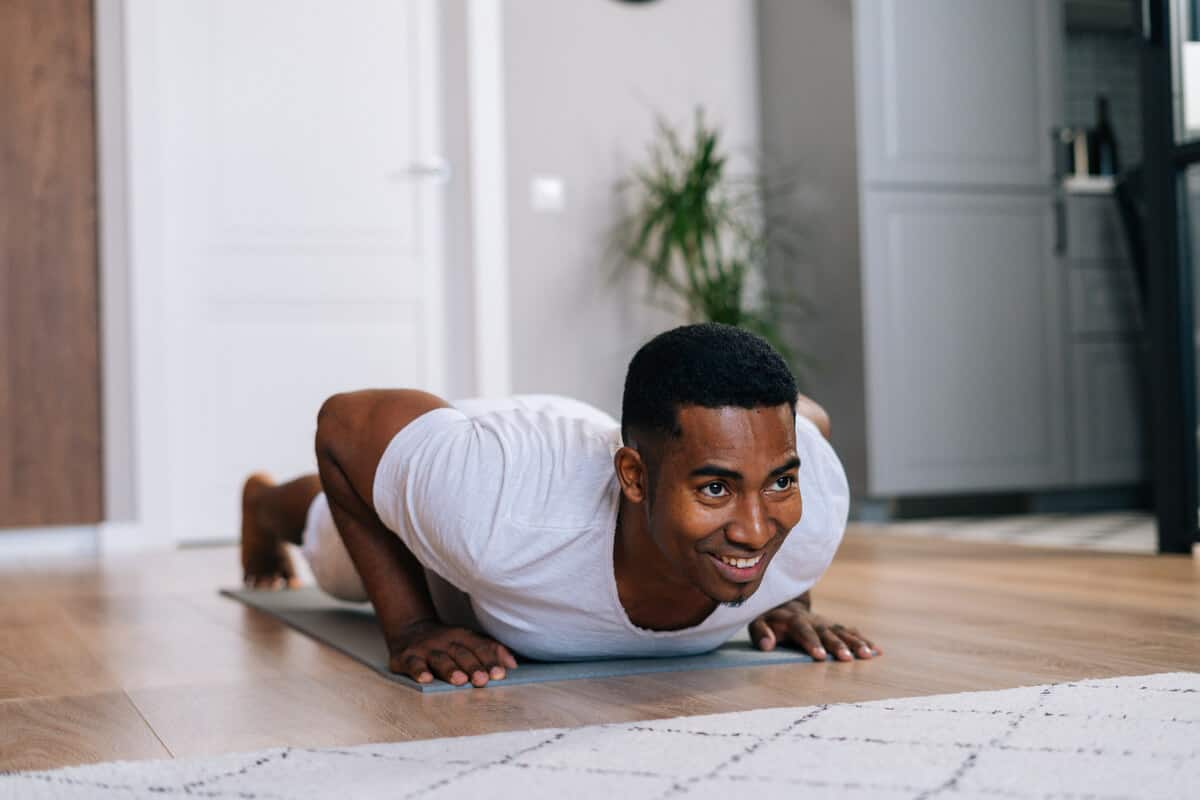 Laughter yoga may be an affordable and accessible way to address the negative effects of stress.

In another study, researchers examined how laughter yoga might attenuate stress in people with cancer. A cancer diagnosis, and the life-disrupting treatment that follows, can cause tremendous amounts of stress, and finding effective ways to address it can improve quality of life during a very difficult time. This study found that participating in 20 to 30 minutes of guided laughter yoga helped cancer patients meaningfully reduce their stress levels. It also helped reduce specific aspects of stress, including fear, daily life limitations, social conflict, and more. (6)

One study found that a 30-minute session of laughter yoga significantly reduced blood glucose levels in people with type 2 diabetes, whether they were on medication or not. The researchers state that these results may be attributed to hormonal and genetic changes that positively affect blood glucose levels, as noted by a previous study. In addition to the blood sugar benefits they observed, the researchers in this study also found that participants experienced other improvements to their well-being, including increases in positive attitude, energy levels, optimism, and relaxation. (5)

Irritable bowel syndrome (IBS) is a chronic digestive condition that causes abdominal pain and changes in bowel habits. It’s the most common chronic gastrointestinal disorder, affecting about 11% of the global population. (4)(12) Since many people with IBS often also suffer from anxiety and depression, psychological interventions are sometimes a part of IBS treatment. One randomized, controlled study found that laughter yoga led to greater reductions in IBS symptom severity than anti-anxiety medications. More research is needed, but based on this study, laughter yoga looks like it could be promising for people who suffer from IBS. (12)

As previously mentioned, laughter yoga employs non-spontaneous laughter. Instead, it relies on scripted exercises in which participants make themselves laugh—whether what they’re doing seems funny or not. Here are a few of the most popular laughter yoga exercises, according to Dr. Kataria:

These laughter yoga exercises and others are demonstrated in Dr. Kataria’s popular YouTube video. If you would like to try laughter yoga in a more structured setting, you can find a club near you to get started.

With all we know about the health benefits of laughter—from stress management and better mood to blood sugar control and improved digestive health—it makes sense to prioritize finding reasons to laugh. Laughter yoga offers a reliable, structured, and fun way to do just that. Whether you join a club or choose to get started at home with a video, laughter yoga could be just the burst of joy—and health—you need.