Crohn’s disease and ulcerative colitis are inflammatory bowel diseases (IBD) characterized by recurring symptoms that include intestinal inflammation, bleeding, bloating, and pain, as well as frequent evacuation of loose, bloody stool. Ulcerative colitis is confined to the mucosal layer of the colon, while the ulceration of Crohn’s colitis can occur anywhere in the digestive tract and penetrate beyond the mucosal layer of the bowel into the muscular layer beneath. (19) Individuals with either inflammatory condition have an elevated risk of nutritional deficiencies. (3)(7)

In cases of Crohn’s disease, chronic inflammation leads to structural changes in the small intestine and the absorptive surface becomes compromised, quickly leading to nutritional deficiencies. Additionally, the surgical removal of portions of the diseased intestine can leave the patient with diminished absorption of nutrients, giving rise to potential long-term health problems that extend beyond the digestive tract. (3)(5) That’s why it’s important to understand the nutritional deficiencies Crohn’s disease patients are most vulnerable to developing.

To diagnose Crohn’s disease, a variety of tests are usually required, including blood tests, medical imagery, and a colonoscopy to confirm the presence of the condition. Checking blood levels of ferritin and hemoglobin will usually identify the most common nutrient deficiency in Crohn’s and colitis patients: iron-deficiency anemia. In fact, 60 to 80% of IBD patients typically have an iron deficiency. (17)

In individuals with Crohn’s disease, factors that contribute to anemia include iron malabsorption, blood loss, and anemia of inflammation, a condition in which inflammatory proteins interfere with iron transport in specific white blood cells and cells lining the intestines. (16) 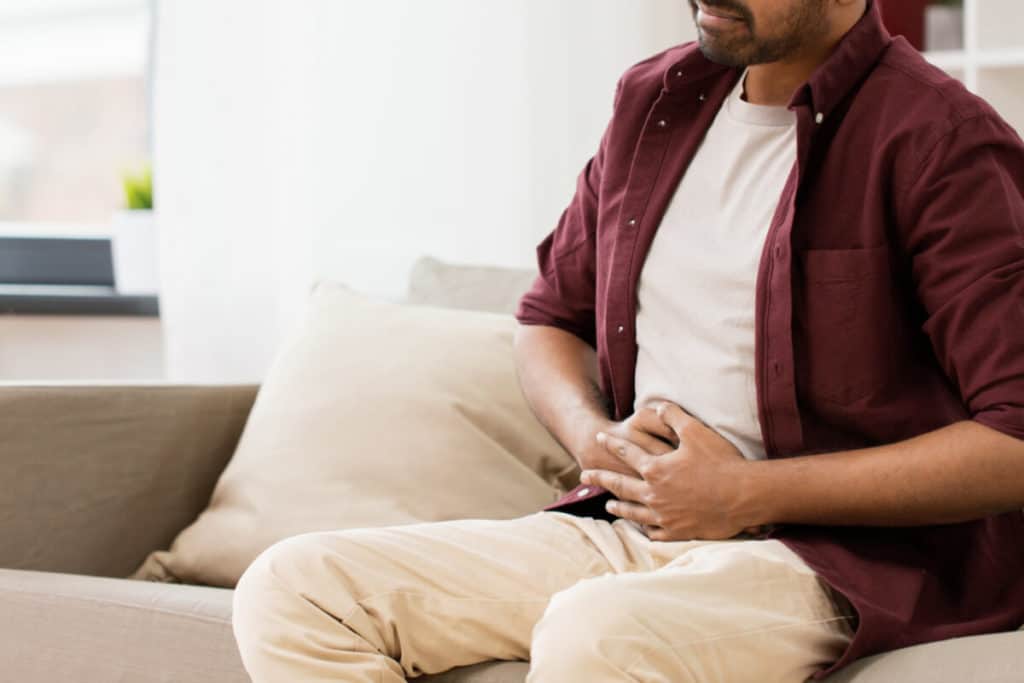 Patients with Crohn’s disease typically experience intestinal inflammation, bleeding, bloating, and pain.Iron repletion is not a task easily accomplished through diet alone. A maximum of approximately 10 to 20 mg of iron can be absorbed daily, (8)(9) and unabsorbed iron is known to cause symptoms such as flatulence, nausea, and diarrhea. (17) Research suggests that oral iron supplementation can be effective in individuals with mild anemia during inactive stages of IBD, while intravenous iron may be beneficial for individuals with poor tolerance of oral iron supplements and lower hemoglobin levels. (8)(17) Some sources suggest that supplementing ascorbic acid (vitamin C) along with iron may improve absorption of the mineral from oral iron supplements. (9)

As with iron, deficiency of vitamin B12 commonly occurs as a result of blood loss and limited absorption. Since vitamin B12 is absorbed in the lowest portion of the small intestine (the ileum), IBD patients who have had full or partial surgical removal of their ileum are at the highest risk of deficiency. (1) Taking B12 sublingually (under the tongue) is an effective way to get it into the bloodstream. Methylcobalamin is the biologically active form of B12 that, when used sublingually, is a more direct and efficient way (other than injection) to ensure adequate blood levels of B12 are present to support the nervous system and healthy hemoglobin synthesis in these patients. (2)

While Crohn’s disease is less common in children than in adults, vitamin D and iron are the two most prevalent nutritional deficiencies found in kids with inflammatory bowel disease. (7)(17) Researchers have found that high vitamin D levels appear to be a protective factor in Crohn’s disease and potentially in colitis. This protective effect may be attributed to vitamin D’s ability to modulate immune function and inflammation. In one experimental study, vitamin D was demonstrated to be necessary for the regeneration of the epithelial cells within the small intestine of mice, suggesting that further studies could identify if the same benefit could influence the condition of human IBD sufferers. (20)

Scientific literature states that the relationship between folate and IBD may be bidirectional—IBD can result in impaired folate absorption, and folate deficiency may be associated with the development of IBD. Specifically, folate levels may affect the interactions between the gut microbiota (microbes) and immune responses involved in the disease process. Not only that, but the implications of low folate status include high blood levels of homocysteine, which is a risk factor for cardiovascular events such as thrombosis (blood clot formation). (17)(21) Folate supplementation can be used to improve nutrient levels and help prevent other conditions in individuals with IBD. (14)

Vitamin K is required for healthy bone calcification (the deposit of calcium in bones) and blood clotting. (12)(13) As vitamin K is manufactured by intestinal bacteria and IBD flare-ups are characterized by frequent stool evacuation, it stands to reason that flare-ups leading to substantial loss of microbiota would impact vitamin K levels. In a study of children with IBD, 54% of those with Crohn’s disease and 43.7% of those with ulcerative colitis were deficient in vitamin K. (12) Overall, a meta-analysis examining vitamin deficiencies in IBD found that fat-soluble vitamins, including vitamin K, are generally lower in IBD patients, and concluded that supplementation may be needed. (6)

Diet and supplementation for Crohn’s disease

The Western diet (high in protein and fat and low in produce) has been suggested as a contributing factor to the increasing incidence of IBD. There is scientific evidence that diet may in fact influence the risk of IBD and intestinal inflammation. Individuals with IBD commonly seek dietary advice to help manage their condition; however, no specific IBD diet currently exists. (10) 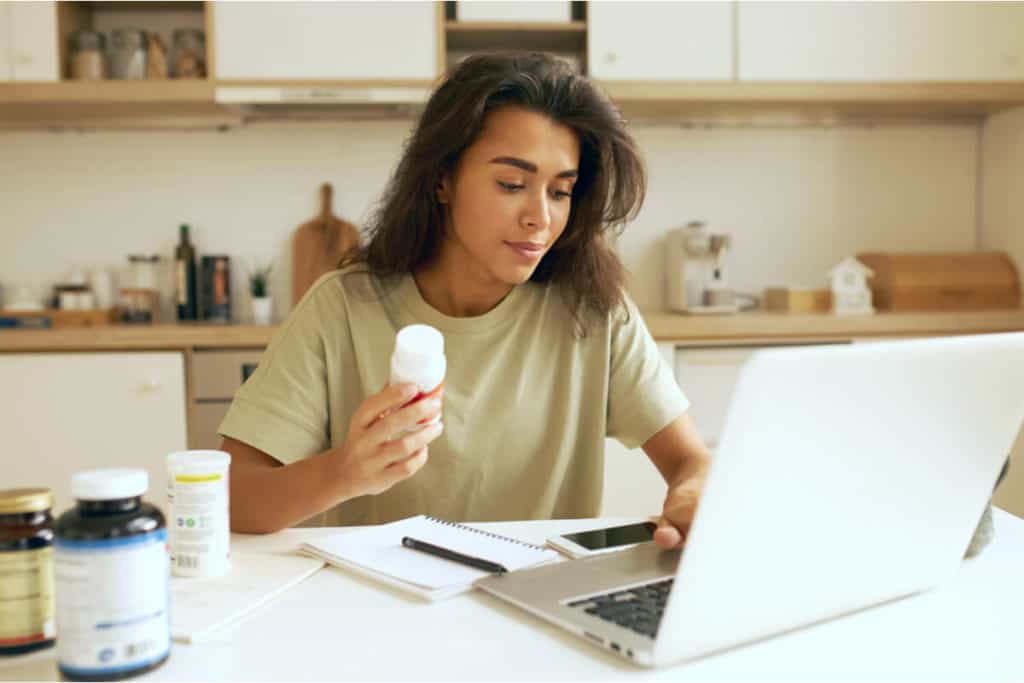 The IBD anti-inflammatory diet (IBD-AID) and low-FODMAP diet are two dietary patterns commonly used by individuals with IBD. (10)Diets that are popular among individuals with Crohn’s disease and colitis include the IBD anti-inflammatory diet (IBD-AID) and the low-FODMAP diet. The IBD-AID restricts certain carbohydrates, such as refined carbohydrates and grains that contain the protein gluten, that may increase the growth of inflammatory gut bacteria, and encourages the consumption of prebiotics, probiotics, and omega-3 fatty acids. The low-FODMAP diet restricts specific carbohydrates that are fermented in the gut and poorly absorbed, namely Fermentable Oligosaccharides, Disaccharides, Monosaccharides, And Polyols. While these diets have demonstrated promising results, further large controlled studies are needed to establish specific dietary recommendations for IBD. (10)

Over the last 25 years, the quality of life and life expectancy of individuals with IBD has significantly increased. (11) In addition to appropriate treatment, dietary supplements, including iron, vitamin B12, vitamin D, folate, and vitamin K may be beneficial for addressing nutrient deficiencies that commonly occur in IBD. (6)(8)(14)(17) With careful attention to nutritional status, stress management, and regular monitoring by health care practitioners who are well-versed in the challenges of Crohn’s and colitis, the well-being of anyone afflicted with this condition stands a very good chance of improvement.

Create your dispensary today I'm a patient
Disclosure: This article was written in partnership with Pure Lab Vitamins. All supplier partnerships have been approved by doctors on our Integrative Medical Advisory team, and this content adheres to all guidelines outlined in our content philosophy. Fullscript has not been compensated financially for the publication of this article.
References