Skip to content
Thorne is now available in our US and Canadian catalogs!
Learn more
Diet & Lifestyle
—

The Blue Zones: Lifestyle Habits of the World’s Longest-Living Populations

Have you ever wondered what the secret is to living a long and healthy life? Beginning in 1999, journalist and explorer Dan Buettner led a series of expeditions with National Geographic and a team of anthropologists, demographers, and scientists to discover the world’s longest-living populations and the commonalities between these unique groups of people. (9)

Through their research, they identified five regions of the world with the largest percentage of individuals 100 years of age or older, collectively called the Blue Zones. The people of these regions engage in similar lifestyle habits, such as consuming a plant-heavy diet and prioritizing tight-knit social networks. These sharing features are referred to as the Power Nine in Dan Buettner’s book “The Blue Zones: Lessons for Living Longer From the People Who’ve Lived the Longest”. (8)

The following five regions were identified as having the world’s healthiest, happiest, and longest-living populations.

Loma Linda, California is home to a large community of Seventh-Day Adventists, a religious group that typically follows a vegetarian diet and avoids alcoholic beverages. (9) Individuals in this community have been shown to outlive the average American by nearly a decade. (9) A study of over 73,000 Seventh-Day Adventists found that those who followed a vegetarian diet or diet with a significantly reduced meat consumption had a lower risk of mortality resulting from cardiovascular, renal (kidney), or endocrine conditions. (16)

It is estimated that Nicoyans are twice as likely to reach the age of 90 years old than North Americans. (9) They are known to maintain an active lifestyle and emphasize faith and family, which is believed to contribute to their longevity. (9) Their diets consist primarily of rice, beans, beef, fish, and chicken, with minimal to no intake of processed and refined foods. (19) Research has shown that Nicoyans, particularly men, present with significantly lower cardiovascular risk biomarkers, including waist circumference and levels of triglycerides, cholesterol, fasting glucose, and blood pressure. (19) Furthermore, both older men and women living in Nicoya experience fewer functional disabilities and less cognitive decline. (19)

Sardinia, an Italian island located in the Mediterranean sea, is unique in that it is home to the longest living men in the world. (9) This population engages in regular physical activity and daily natural movement, and is known to walk significant distances through hilly terrain each day, promoting heart and bone health. (9) Their diets are mostly plant-based, comprising an abundance of vegetables, fruits, beans, and whole-grain bread. Additionally, Sardinians prioritize strong interpersonal relationships, which contributes to their mental and physical well-being. (11)

Approximately 8,000 people live on the small Greek island in the Aegean Sea known as Ikaria. The overwhelming majority of older people living in Ikaria report following a mostly plant-based diet, engaging in daily physical activity, socializing with friends and family frequently, avoiding smoking, and enjoying mid-day naps, all of which may contribute to their longer lifespans. (17) Older Ikarians are likely to remain physically active well into the 80s and 90s. A study investigating the longevity of Ikarians demonstrated that approximately 6 out of 10 individuals over the age of 90 participated in regular physical activity, including walking and other moderate-intensity activities. (17)

Located in Japan, Okinawa is best known for being home to the longest living women on earth. Okinawans typically live well into their 80s and beyond, largely without crippling disability or illness that commonly affects North Americans and people of many other countries around the world. Research has demonstrated that Okinawans have lower rates of age-related conditions, such as cardiovascular disease and cancer, compared to the rest of Japan and the United States. (3)(4) 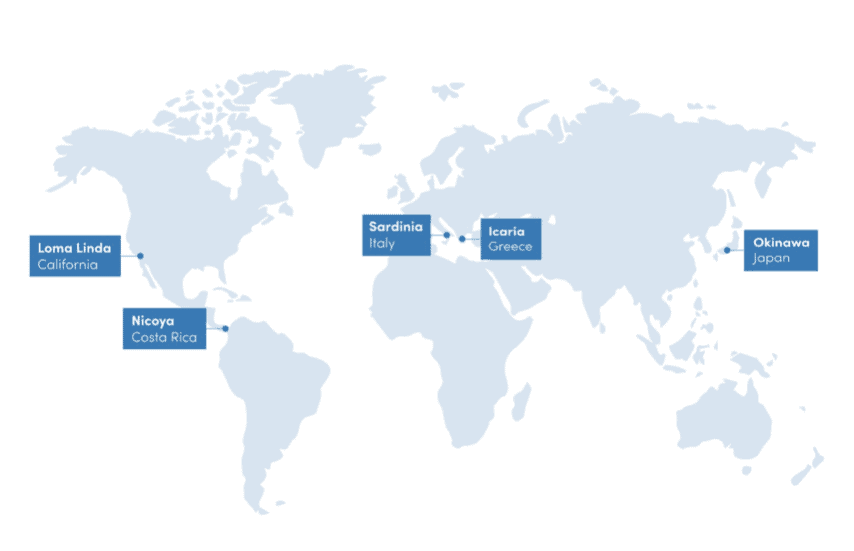 The Blue Zones map includes the five regions of the world with the longest-living populations, including Loma Linda, Nicoya, Sardinia, Ikaria, Okinawa. 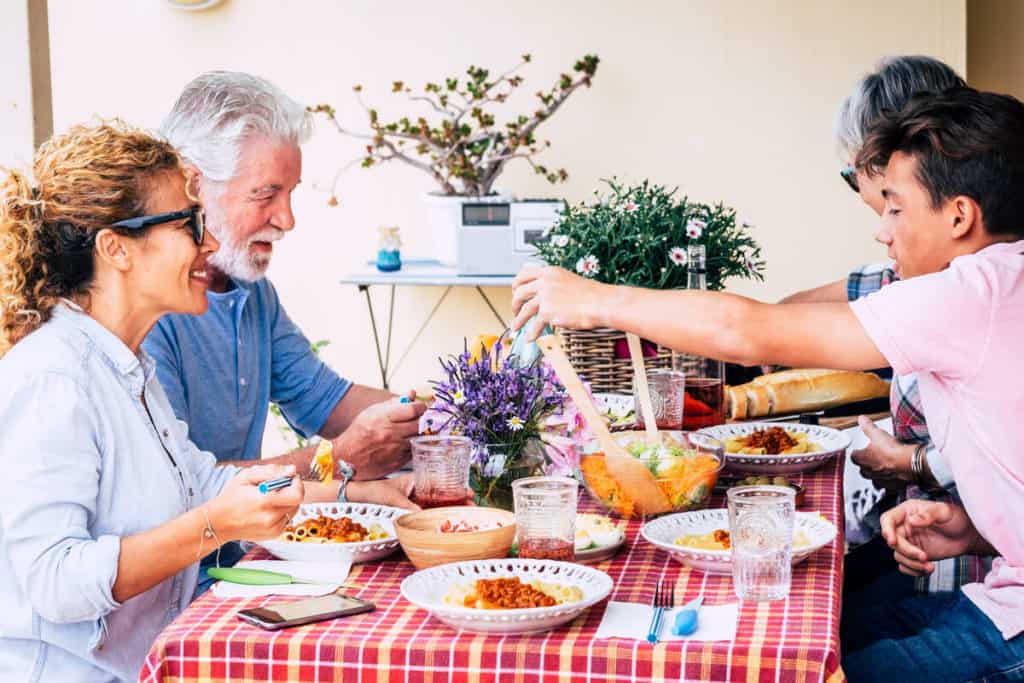 The Blue Zones are home to the happiest and healthiest populations in the world.

Individuals living in Blue Zone regions engage in everyday physical activities, such as gardening, walking, and climbing hills and mountains. Many of them maintain traditional lifestyles, refraining from using modern mechanical conveniences, such as washing machines and farming equipment. (9) Physical activity is protective against certain chronic conditions, including heart disease, stroke, and type 2 diabetes, and is associated with improved psychological health and quality of life. (14)

One’s purpose in life, referred to as Ikigai in Okinawa and plan de vida in Nicoya (which translates to “why I wake up in the morning”), contributes to human longevity and overall health and well-being. (9) Individuals with a purpose in life are goal-driven, move through life with intention, and analyze life experiences for their personal growth and development. Having a greater purpose in life, whether that be a hobby, fulfilling career, or responsibility to care for loved ones, is associated with numerous psychological benefits, including improved happiness, self-esteem, gratitude, and a positive outlook on life. (8)

Although stress is nearly impossible to avoid, chronic (long-term) stress can wreak havoc on the body. When left unaddressed, chronic stress may contribute to inflammation and certain health conditions, such as heart disease and depression. (12) (2) The world’s longest-living people engage in activities that help manage stress, such as napping, praying, and attending happy hour with friends. (9)

People in the Blue Zones tend to avoid overeating by eating until their stomachs are about 80% full. Many individuals also eat smaller meals throughout the day and abstain from eating late in the evening. For example, Okinawans follow the principle Hara Hachi Bu, which means “eat until you’re 80% full”. Sticking to this simple rule prevents overeating, encourages more mindful eating practices, and contributes to longevity. (9)

Most of their eating patterns align with the Mediterranean diet, emphasizing the consumption of vegetables, fruits, whole grains, nuts, seeds, beans, legumes, and healthy oils such as extra-virgin olive oil (EVOO). Extensive research has demonstrated that a plant-heavy diet, such as the Mediterranean diet, is associated with a lower risk of all-cause mortality, lower incidence of depression, and reduced cognitive decline. (15)(20)

People living in the Blue Zones eat an abundance of plant-based foods.

Enjoying moderate amounts of wine (one to two glasses per day) with friends and family is a common practice among many adults living in the Blue Zones, with the exception of the Seventh-Day Adventists of Loma Linda, California. (9) As part of the Mediterranean diet, wine consumption has been associated with improved disease prognosis and a reduced risk of numerous chronic health concerns, including age-related cognitive decline, cardiovascular disease, type 2 diabetes, and certain cancers. (18)

Centenarians often choose to participate in social circles that support healthy lifestyles and behaviors. (9) Social connectedness is particularly important for maintaining psychological and physical well-being in old age. Research has shown that older adults who have strong social support and social networks tend to retain independence, have a stronger sense of purpose in life, and may experience slower cognitive decline compared to those who are socially isolated. (9)

Did you know? Healthy habits may be contagious. Researchers have found that people are more likely to engage in healthy or unhealthy behaviors depending on the behavior of those in their social circles. (1)(10)

Family relationships are a top priority for individuals in Blue Zone regions. Parents invest time in their children and individuals have committed life partners. (9) Furthermore, it is common for aging parents and grandparents to live with their children or other family members, where they contribute to household responsibilities and childcare. (8)

The Blue Zones are unique regions across the world with the healthiest, happiest, and longest-living people, as identified by Dan Buettner, National Geographic, and several scientists. Focusing on a healthy diet, regular physical activity, social connectedness, spirituality, and stress management are healthy habits shared by the people living within the Blue Zones and may promote overall health and longevity.

One comment on “The Blue Zones: Lifestyle Habits of the World’s Longest-Living Populations”