Benefits of CBD: What the Science Says About CBD Effects

The origins and cultivation of the herbaceous plant Cannabis sativa L. can be traced back to ancient civilizations. (1) However, due to a long history of controversy over its use, it has only recently regained significant attention as a result of legislation changes surrounding its manufacturing and distribution in the United States. There is now a growing body of research surrounding cannabis and its compounds, including cannabidiol (CBD), as well as benefits of CBD.

CBD can be a divisive topic, but what does the science say? Dr. Holly Lucille discusses the evidence-based research surrounding CBD effects.

What is the endocannabinoid system?

In order to discuss the therapeutic potential of CBD, it is first important to understand the role and function of the endocannabinoid system (ECS) within the body.

The endocannabinoid system is a lipid signaling system made up of enzymes, endogenous cannabinoids, and cannabinoid receptors. (8)(10)(19) The ECS is found within the central and peripheral nervous systems, where it is involved in regulating many body functions, (15)(19) as well as modulating the immune system, autonomic nervous system, and microcirculation. (19)

Within the ECS, the two primary cannabinoid receptors are known as type 1 (CB1) and type 2 (CB2). (16) These receptors are activated by endocannabinoids, which are endogenous lipid chemical mediators. (9) Found abundantly in the brain, (16) CB1 receptors appear to be directly involved in many functions, including behavior, emotions, cognition, motor control, homeostasis, (19) reproduction, sexual behavior, appetite, and energy balance. (16) CB1 receptors are also believed to play a role in the hypothalamic-pituitary-adrenal axis and hypothalamic-peripheral endocrine axes. CB2 receptors are found primarily in immune and blood cells, where they play an important part in regulating immune function. (16) 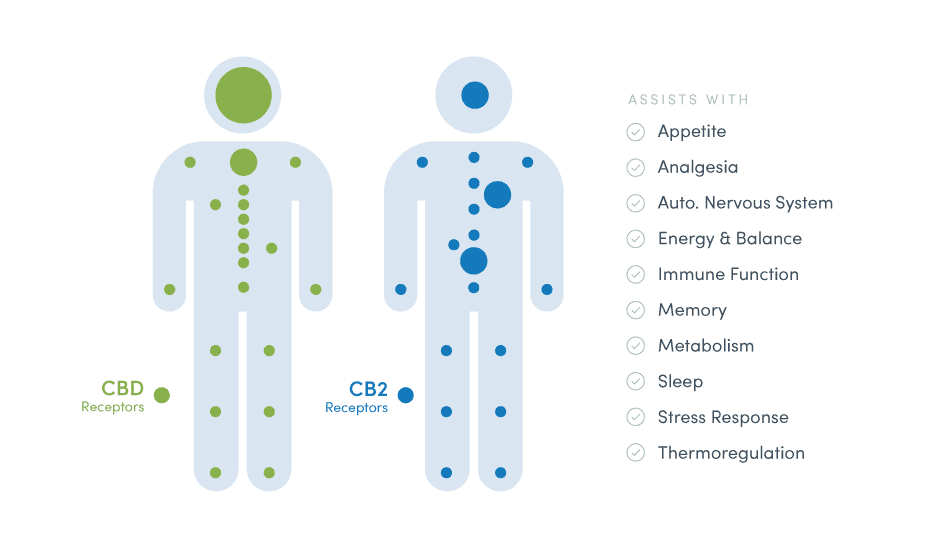 The endocannabinoid system is found within the central and peripheral nervous systems, where it is involved in regulating many body functions. (16)(19)

While our knowledge of the endocannabinoid system and its functions continues to grow, evidence supports the implication of the ECS in disease as alterations in endocannabinoid activity and receptor expression has been observed in a number of pathologies. (9)(10) Research has demonstrated that certain factors have the ability to prolong or inhibit the actions of endocannabinoids, (9) suggesting that modulation of ECS activity may be an effective therapeutic target for various health conditions, including:

The ability to modify endocannabinoid activity, by stimulating or inhibiting receptor binding, for example, offers the potential for exciting new therapies. (9)

What is CBD oil?

CBD a fat-soluble compound (5) available in oral supplements as CBD oil, where CBD extract is generally diluted in a base or carrier oil. For example, hemp seed oil is used as a carrier in products known as CBD hemp oil. CBD can be supplemented in various forms, including vaporized, taken orally as CBD oil, liquid tincture, gummies, or capsules, and applied topically in creams or ointments. 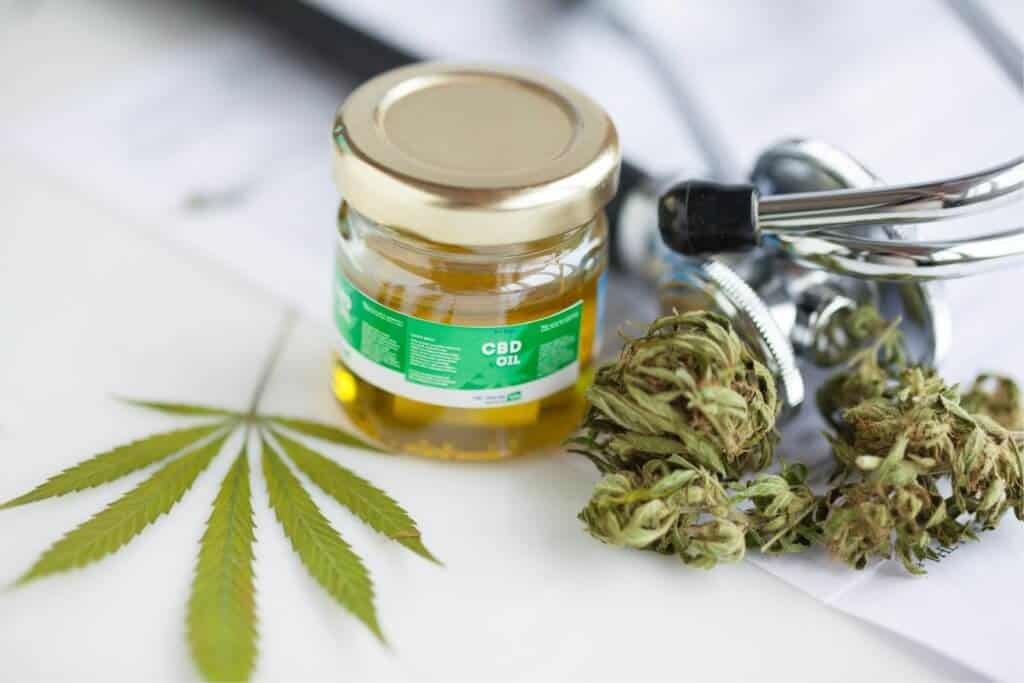 Research has identified more than one hundred different cannabinoids in the Cannabis sativa plant called “phytocannabinoids’. (12)

While still in the early stages, there is a growing body of research aimed at examining the effects of CBD in the treatment of several health conditions, such as epilepsy, pain, and anxiety.

CBD decreases the frequency of seizures and appears to be an effective tool in treating treatment-resistant epilepsy when used in conjunction with anti-epileptic medications. A double-blind, placebo-controlled trial examined the efficacy of CBD when used in conjunction with antiepileptic medication in patients with Lennox-Gastaut syndrome experiencing at least two seizures per week. Patients were given 20 mg/kg of oral CBD, 10 mg/kg of oral CBD, or a placebo for 14 weeks. Seizure frequency decreased 41.9% in patients receiving 20 mg of CBD, 37.2% in patients receiving 10 mg of CBD, and 17.2% in the placebo group. (7)

Another study found similar results when CBD was administered as an adjunct to antiepileptic medications in patients with tuberous sclerosis complex (TSC)-related seizures. A 5mg/kg per day dose of CBD was administered, increasing 5 mg/kg per day every week to a maximum dose of 50 mg/kg per day. After three months, the median percentage change in seizure frequency decreased by 48.8%. Another open-label trial found that CBD was effective in decreasing the frequency of seizures in children and young adults with treatment-resistant epilepsy when used in combination with existing antiepileptic medications. (6)

While these results demonstrate promise for the use of CBD in treatment-resistant epilepsy, further placebo-controlled trials are necessary. Research thus far has also been limited to the use of CBD as an adjunct to pharmaceuticals and the effects of CBD on its own has not yet been determined.

While many studies have highlighted the analgesic effects of vaporized cannabis (4)(22)(23), some studies demonstrate that CBD extract may provide similar benefits. CBD may improve chronic pain in kidney transplant patients. Seven patients between the ages of 58 and 75 received 50 mg to 150 mg of CBD twice per day over three weeks. Results demonstrated total pain improvement in two patients, partial improvement in four patients, and no change in only one patient. (5) Another study examined the short-term effects of CBD-enriched hemp oil in young girls with adverse drug effects (ADRs) following the human papillomavirus (HPV) vaccine. Administration sublingual CBD hemp oil drops in doses of 25 mg/kg per day and 2-5 mg/ml CBD once a week up to a maximum dose of 150 mg/ml CBD per day resulted in significant reductions in pain and improvements in physical component, vitality, and social role functioning scores. (17)

Studies have demonstrated the therapeutic properties of CBD for anxiety. One double-blind trial even demonstrated that CBD may reduce THC-induced anxiety, suggesting an antagonistic action between CBD and THC. (28)

Two studies were conducted to examine the effects of various doses of CBD for anxiety induced by the performance of a simulated public speaking test. In the first study, 60 subjects were randomly assigned to receive a placebo, clonazepam, or CBD (100 mg, 300 mg, or 900 mg). Results demonstrated a reduction in subjective anxiety measures in individuals taking 300 mg of CBD, but those taking 100 mg and 900 mg did not demonstrate the same effects. (27)

Similarly, in another double-blind trial, 57 male subjects performing a simulated public speaking test were given 150 mg, 300 mg, or 600 mg of CBD, or a placebo. When administered prior to the speech, 300 mg of CBD reduced anxiety, while no significant differences were observed in groups receiving the placebo, 150 mg of CBD, or 600 mg of CBD. (13) The results of these studies suggest that the beneficial effects of CBD for anxiety follow a dose-dependent inverted U-shaped curve. (13)(27)

CBD is believed to have antipsychotic effects and may be effective in treating neurodegenerative conditions. While some studies have examined the use of CBD in the treatment of schizophrenia, evidence is conflicting.

In a 2018 exploratory double-blind, parallel-group trial, patients with schizophrenia received 100 mg/day of CBD or a placebo in conjunction with their current antipsychotic medications. Patients in the CBD group demonstrated lower positive psychotic symptoms, suggesting that CBD may be beneficial in the treatment of schizophrenia. Although not statistically significant, the CBD group also demonstrated greater improvements in cognitive performance and overall functioning compared to the placebo group. (14) However, in another placebo-controlled study conducted the same year, 600 mg/day of CBD did not result in improvements in MATRICS Consensus Cognitive Battery (MCCB) or Positive and Negative Syndrome Scale (PANSS) scores in antipsychotic-treated schizophrenic patients. (2) 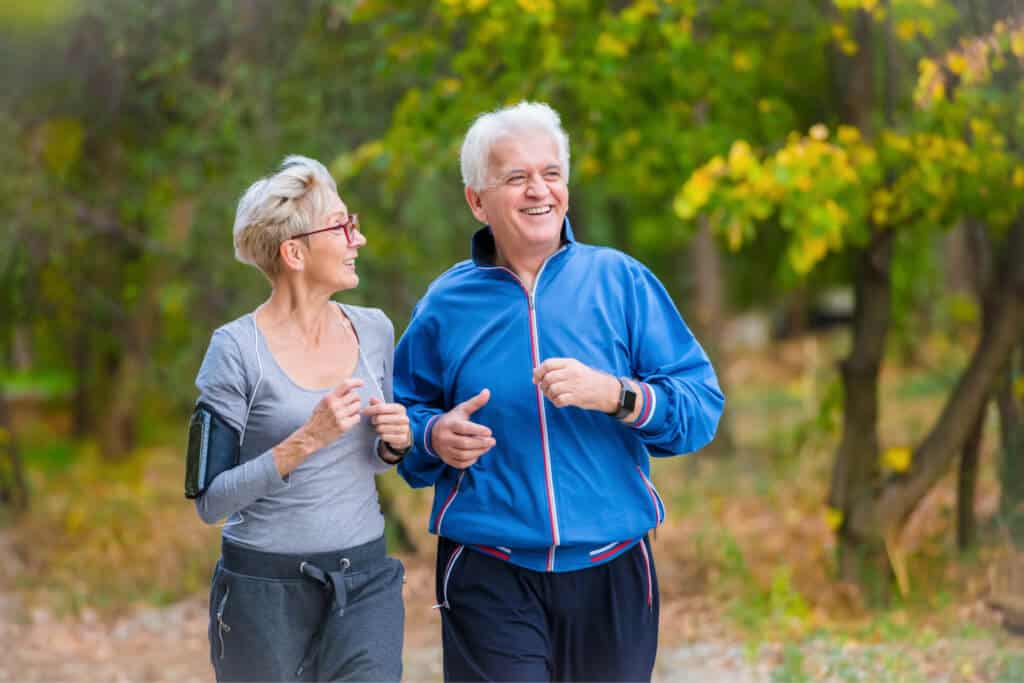 Research shows that CBD may be effective in the treatment of several health conditions, such as epilepsy, pain, and anxiety.

Guidelines for working with CBD

The following guidelines can be applied when recommending CBD products:

While CBD has shown promise in a number of areas, it is still a relatively new therapeutic tool and prescribing standards are still being established. The best approach when it comes to dosing is to “Start Low and Go Slow”, meaning start treatment at a low dose and increase incrementally, noting that dose dependence seems to vary patient to patient.

2. Determine dosing with the equivalency factor

CBD extracts typically start at 10 mg or 1 ml CBD oil per day dosing. Look at the equivalency factor in dosing to calculate the quantity of CBD being consumed per dose.

Research suggests that full-spectrum hemp products may induce additional therapeutic benefits through the synergistic actions of CBD, THC, and various other phytocannabinoids. This synergy between phytocannabinoids is known as the “entourage effect”. (18)(20)

Several animal and in-vitro studies have noted interactions between CBD and cytochrome P450 enzymes. Specifically, research has shown that CBD may inhibit CYP1A1, CYP1A2, CYP1B1, (25) CYP2D6 (26), and CYP2C (3) and CYP3A (3)(24) subfamilies. Therefore, CBD could potentially interact with certain medications that are cytochrome P450 substrates. Be sure to consider other medications and supplements a patient is taking to limit any potential negative interactions.

To ensure the best quality, be sure to purchase CBD products from a reputable source. Products should be manufactured in a facility compliant to cGMP standards and each batch should have an associated certificate of analysis. Some manufacturers will also have independent third party, ISO-accredited laboratory testing of their products, and certifications like US Hemp Authority, which traces ingredient sourcing.

While research has demonstrated some promise in the treatment of epilepsy, anxiety, pain, the literature surrounding the effects and potential benefits of CBD is still in its early stages. When it comes to prescribing CBD, it’s best to exercise caution as more research emerges and therapeutic standards are established.

2 comments on “Benefits of CBD: What the Science Says About CBD Effects”