The Role of Adaptogens in Stress And Fatigue Management

We have all undoubtedly experienced some sort of stress in our lives. Short-term, acute stress is not only normal but essential to survival. Whether physical, such as illness or injury, or emotional, our bodies have mechanisms in place to help us deal with both internal and external stressors. These mechanisms, controlled by the hypothalamic-pituitary-adrenal (HPA) axis and the sympathetic nervous system, are known collectively as the stress response and work to maintain homeostasis in the body. Homeostasis refers to the body’s ability to respond to stimuli and maintain a state of balance in the body that is necessary for proper functioning and survival. (6)(22)

While these mechanisms exist to deal with acute stress, applying these mechanisms to cope with long-term “chronic” stress may be detrimental. Unaddressed chronic stress can contribute to a number of stress-related health conditions, such as anxiety, depression, hypertension, heart disease, memory impairment, and chronic fatigue syndrome. (18) Furthermore, chronic stress has been linked with impaired adrenal function, HPA axis dysfunction, and metabolic syndrome. (13) When you are exposed to excess stress, adaptogens may be able to help improve your resistance to stress and normalize body functions.

Commonly used in ayurvedic and Unani traditional medicine for their rejuvenating properties, adaptogens have been around for thousands of years dating back to ancient Indian and Chinese civilizations. The modern concept of adaptogens was established in 1947 by Russian scientist Dr. Nikolai Lazarev, who studied adaptogens while searching for substances that could help soldiers improve general resistance to stressors and performance in battle. (19)

The word “adaptogen” is derived from the Greek word “adapto”, meaning “to adjust”. (19) Adaptogens include several plants or herbs and are defined as biologically active, medicinal plant substances that help your body adapt or adjust to stress. (24)

Adaptogens have the ability to improve the body’s nonspecific resistance to internal and external stressors, normalizing body functions, and maintaining homeostasis. (17)(19)(24) Nontoxic in standard doses, adaptogens may reduce both the severity and negative effects of stress from any source, such as emotional stress, physical trauma or injury, fatigue, poor lifestyle choices, illness, and pollution. (19) Adaptogens may, therefore, reduce the risk of stress-related health conditions. (16)

How do adaptogens work?

We’ve established that adaptogens possess stress-protective properties. (18)(19) However, it’s also important to discuss how they work. 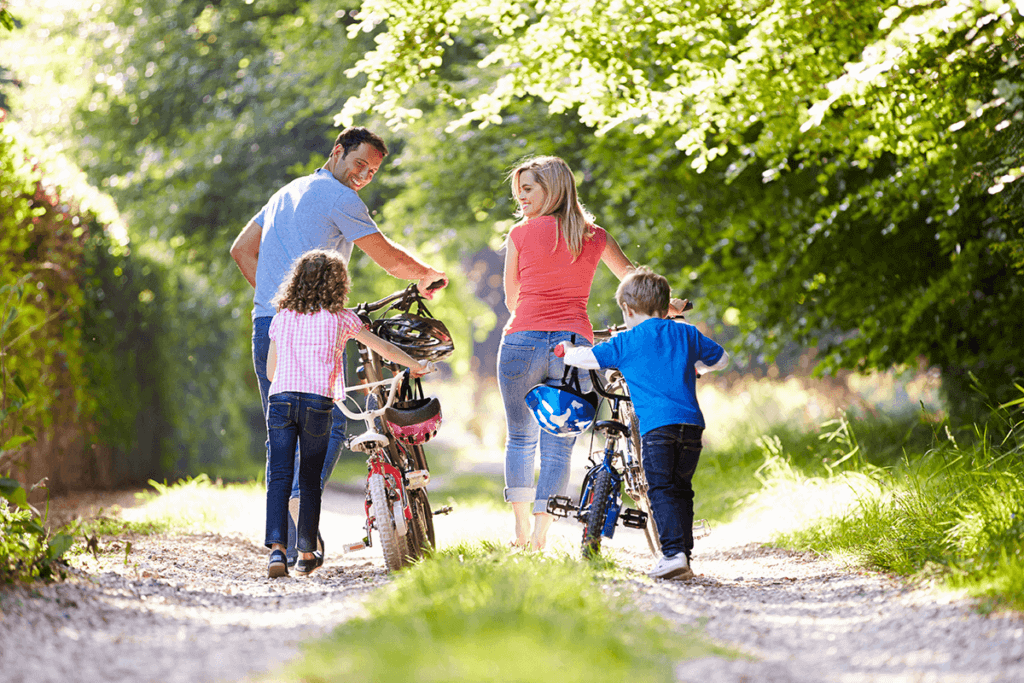 Did you know adaptogens can help improve your resistance to stress and fatigue?

The primary effects of adaptogens include:

Each of these effects is observed with adjustment of the HPA axis, indicating that the mechanism of action of adaptogens involves the regulation of this pathway. (13) It has been shown that adaptogens help the body maintain homeostasis by affecting the central nervous system (CNS) and regulating several mechanisms involved in HPA axis activity. Adaptogens affect both biochemical markers of stress and metabolic regulators, including the hormones that regulate HPA axis activity. Examples of these markers and regulators include nitric oxide, cortisol, corticosterone, glucose, cytokines, biogenic amines, and neuropeptides. (18)(19) Adaptogens also display moderate effects on the biosynthesis of eicosanoids, such as prostaglandins, leukotrienes, and arachidonic acids, which play a role in the inflammatory response. (19)

While various adaptogens exhibit similar characteristics, their properties may be specifically attributed to the chemical compounds they possess. (16)(24) These compounds can be divided into three groups: phenolic compounds, tetracyclic triterpenes, and oxylipins.

Phenolic compounds, found in the roots and rhizomes of certain adaptogenic herbs, such as E. senticosus, R. rosea, and S. chinensis, structurally resemble catecholamines. (19) Catecholamines, including epinephrine, norepinephrine, and dopamine, are hormones produced by the adrenal glands that function as neurotransmitters. (10)

Tetracyclic triterpenes resemble the structure of corticosteroids and are found in B. alba and W. somnifera extract. (19) Corticosteroids, including glucocorticoids and mineralocorticoids, are also produced in the adrenal glands and play a significant role in the regulation of stress via the HPA axis. (2)

Oxylipins, found in B. alba and G. glabra, resemble leukotrienes and lipoxins, (19) which play important roles in inflammation and immunity. (20)

Research has demonstrated the beneficial effects of the following adaptogens on stress and fatigue. 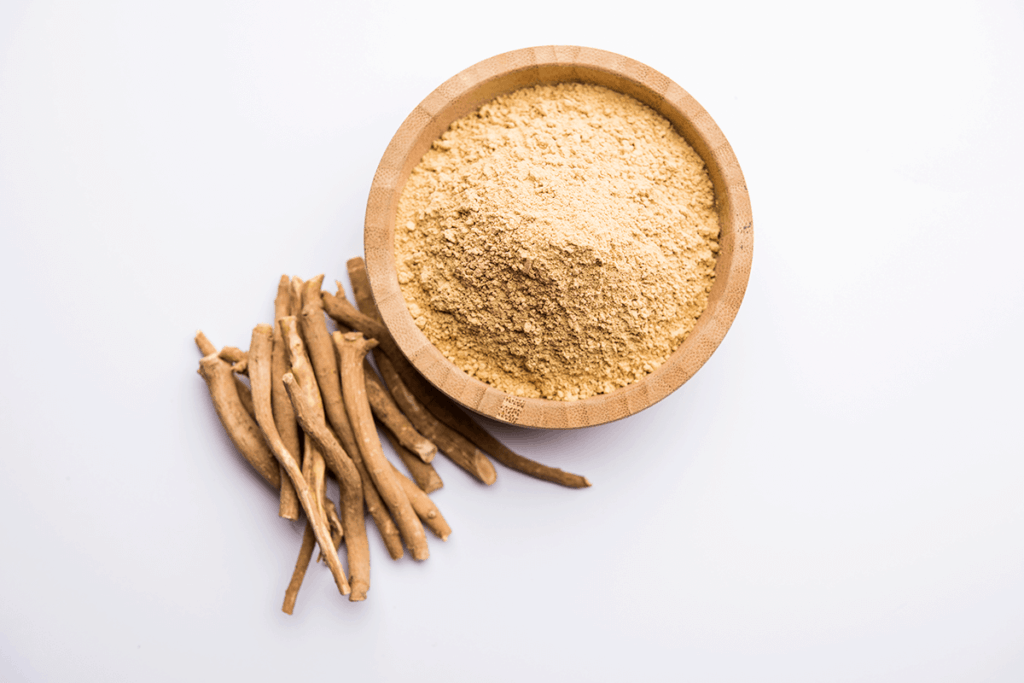 Ashwagandha is a popular herb in Ayurveda, the traditional system of medicine in India.

Commonly known as “Indian Winter cherry” or “Indian Ginseng”, ashwagandha remains a popular herb in Ayurveda, the traditional system of medicine in India. Ashwagandha is known for its adaptogenic, antioxidant and immune-supportive properties. (21) A double-blind, placebo-controlled study with 64 adult subjects examined the effects of ashwagandha on stress, anxiety, and general well-being. Test subjects were given 300 mg twice daily of high-concentration, full-spectrum extract from the root of the ashwagandha plant over a period of 60 days. Compared to the placebo group, subjects taking ashwagandha had significantly lower serum cortisol levels. Adverse effects were mild and similar in both groups, indicating that ashwagandha may be a safe and effective way to improve an individual’s response to stress. (4) Another double-blind, randomized, placebo-controlled trial found that 300 mg of standardized ashwagandha root extract administered twice daily over eight weeks improved perceived stress and happiness, food cravings, serum cortisol, body weight, and body mass index compared to a control group. These results indicate that ashwagandha is an effective tool to address stress, as well as weight management in adults experiencing chronic stress. (5) 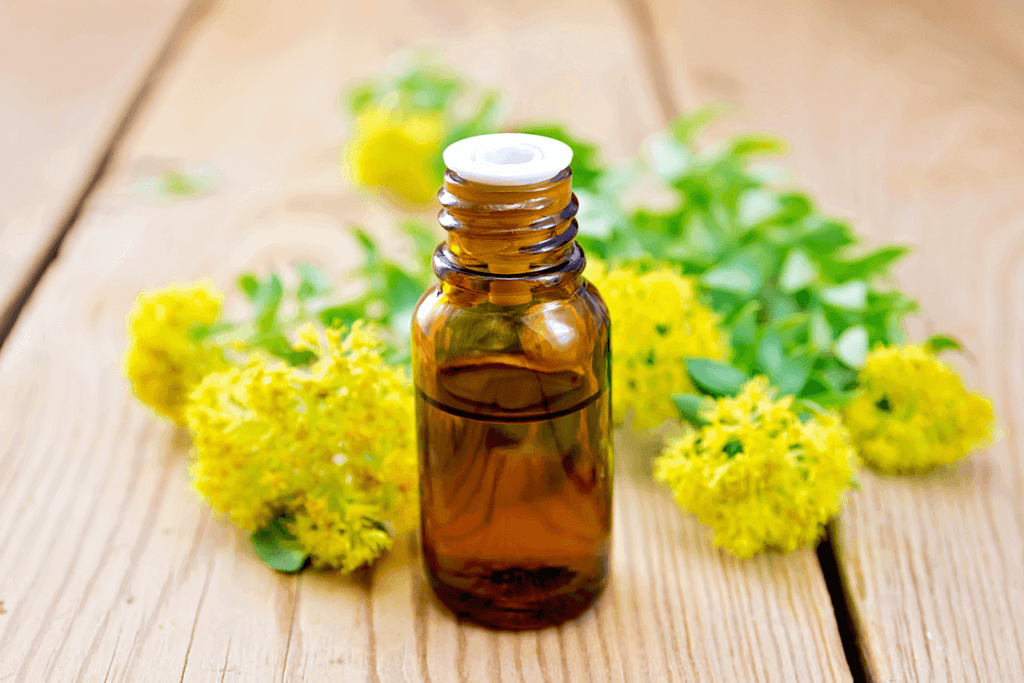 Like many adaptogens, Rhodiola was historically used in traditional Chinese medicine. It is known for its ability to reduce stress and improve physical endurance. (14) Several studies have demonstrated that Rhodiola may be effective in addressing fatigue. A double-blind cross-over study examined the effects of Rhodiola rosea L. standardized extract (RRE) on fatigue in 56 healthy physicians working overnight. The test group showed significant improvements in mental fatigue. (7)

Another study found that RRE was effective in the treatment of stress-related fatigue in burnout patients. RRE improved fatigue, mental performance, and concentration, while it decreased the cortisol response to stress. (15) 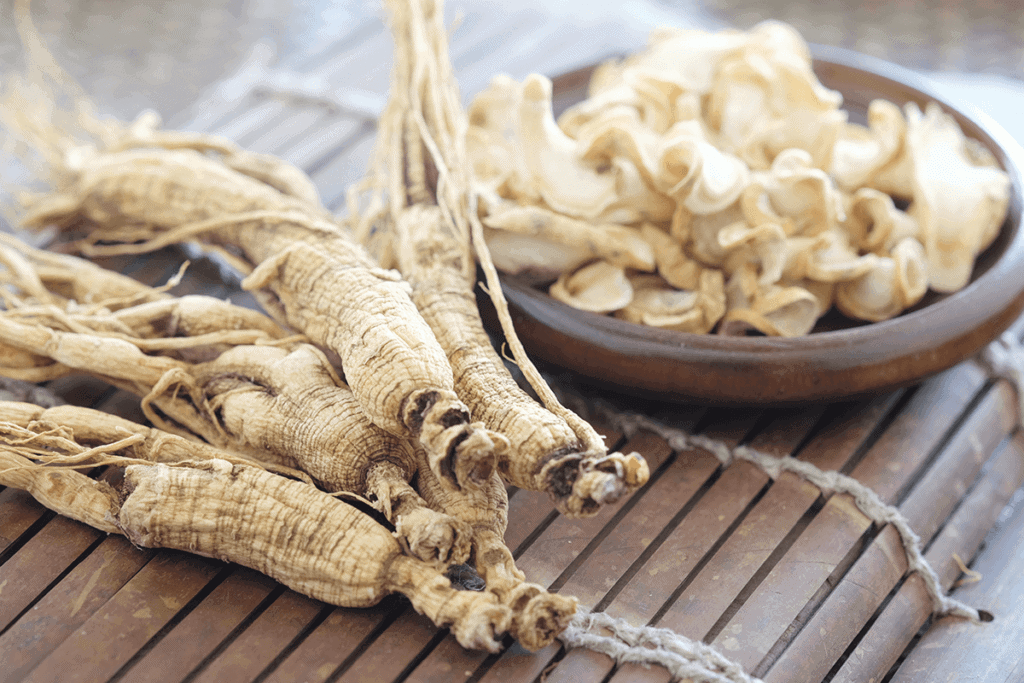 Ginseng may well be one of the most widely used to improve energy and general health.

Traditionally used in Korean and Chinese medicines, Panax ginseng, has demonstrated numerous therapeutic properties. These properties have been attributed to ginsenosides, P. ginseng’s primary active constituent. (12) Among the adaptogenic herbs, ginseng may well be one of the most widely used to improve energy and general health.

Numerous studies have shown that P. ginseng has demonstrated anti-fatigue properties. A systematic review examining the effectiveness of ginseng as a treatment for fatigue found both American and Asian ginseng to be effective in treating fatigue in individuals suffering from chronic illness. (1) Further, a randomized, double-blind, placebo-controlled trial with 90 subjects found that P. ginseng extract administered over four weeks induced anti-fatigue effects in individuals with idiopathic chronic fatigue (ICF). The study attributed these effects in part to the antioxidant properties of P. ginseng. (11) 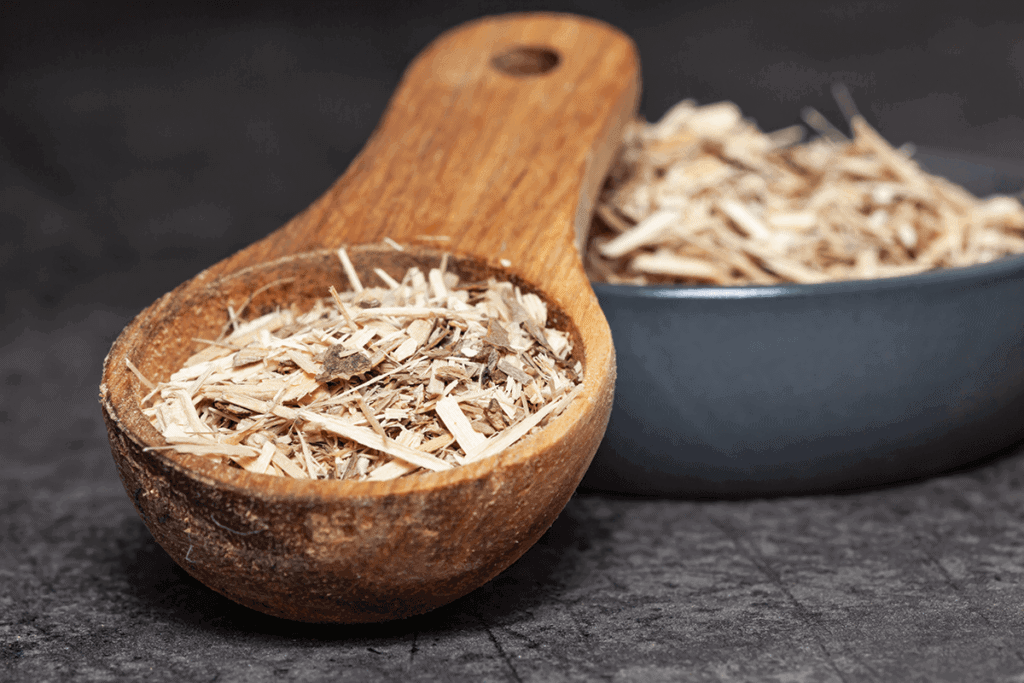 Siberian ginseng is a wild shrub of the Araliaceae family that grows extensively in several parts of Asia and Russia.

Not to be confused with Panax ginseng, Siberian ginseng is a wild shrub of the Araliaceae family that grows extensively in several parts of Asia and Russia. (3) It is known primarily for its adaptogenic effect and studies on the use of Siberian ginseng for fatigue have shown promise. A randomized controlled trial examined the effects of Siberian ginseng for chronic fatigue in 96 subjects compared to a placebo. While reduction of fatigue was similar in both groups, fatigue severity and duration showed statistically significant improvements following two-month treatment of Siberian ginseng. (9)

Furthermore, Siberian ginseng may also be effective in addressing stress. In a double-blind trial, individuals received either Eleutherococcus senticosus or a placebo for 30 days and were then given a stressful cognitive task. Both men and women in the treatment group exhibited a reduced heart rate. In addition, systolic blood pressure was also reduced in female subjects, while no change was observed in the placebo group. (8) 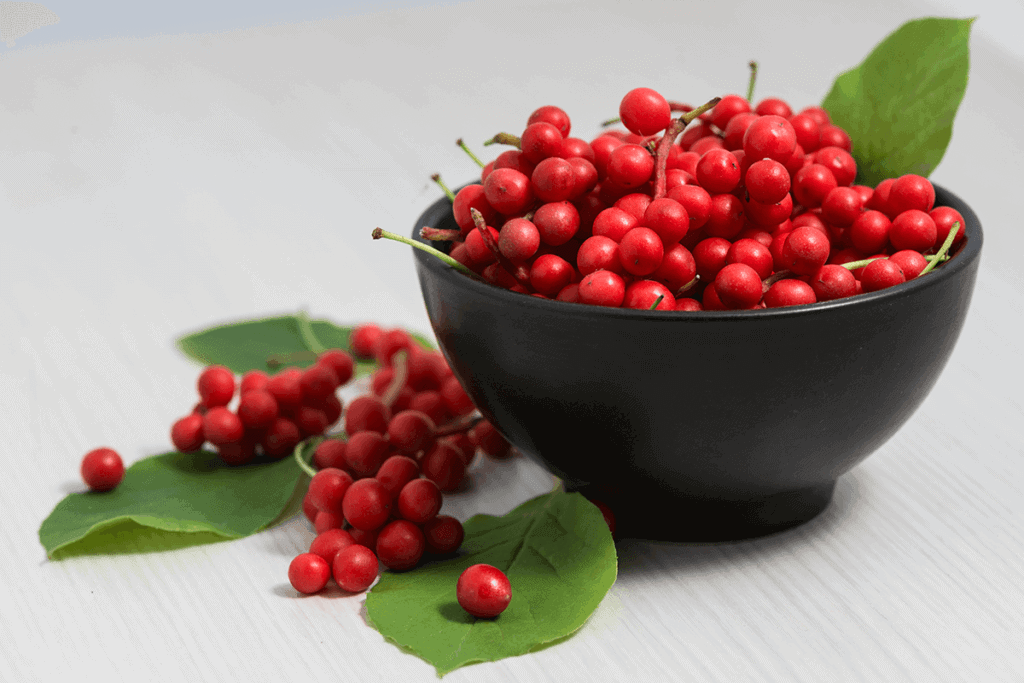 Schisandra, the fruit of the Chinese magnolia vine, was first used in traditional Russian and Chinese medicines.

Schisandra, the fruit of the Chinese magnolia vine, was first used in traditional Russian and Chinese medicines. It was believed to help with several health conditions including body fatigue and weakness, insomnia, mental health and vitality, and diseases of the digestive, respiratory, and cardiovascular systems. (23)

Today, Schisandra is known to have adaptogenic effects. A recent review of the effects of adaptogens on stress and the CNS identified S. chinensis extract as an effective treatment for astheno-depressive states. Schisandra has also been shown to improve fatigue, mood, and appetite. (16)

While adaptogens may help your body adapt to stress and fatigue, it is essential to address the cause of your stress and reduce your overall exposure. Eating a healthy, balanced diet, engaging in regular exercise, and utilizing relaxation techniques, such as meditation, can help you manage your stress levels and keep you feeling your best. If you’re a patient, speak to your integrative healthcare practitioner to determine whether adaptogen supplements are right for you.