An Overview of the Steroidogenic Pathways 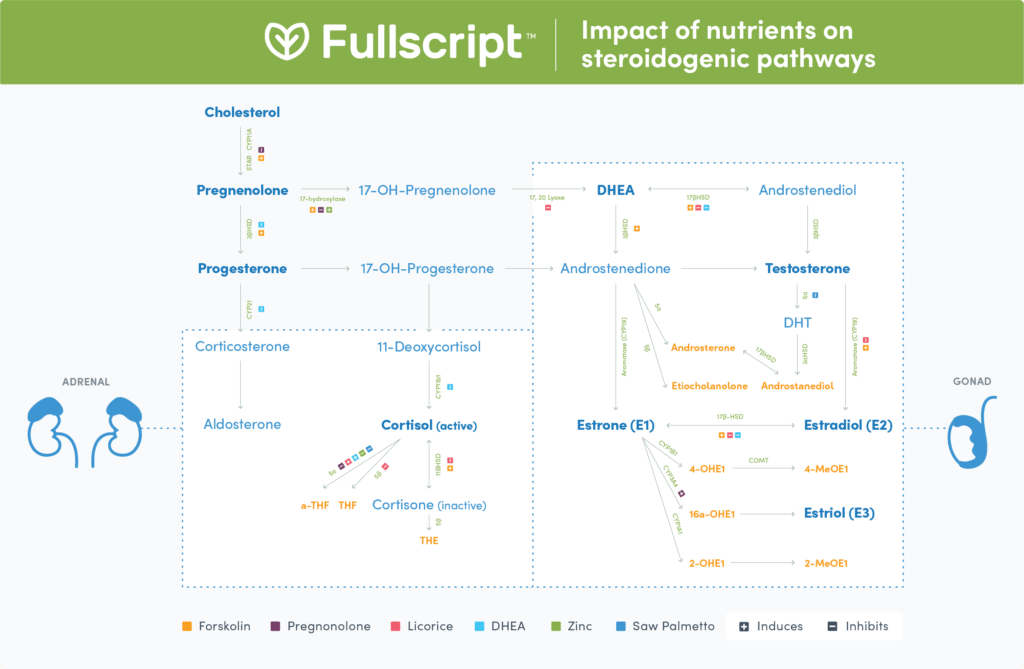 This diagram represents the steroidogenic pathways.

The fates of pregnenolone

While pregnenolone may exert direct hormonal effects in the body, it is also involved in three separate steroidogenic pathways, each of which produces specific hormones and metabolites:

Pregnenolone to progesterone, corticosterone, and aldosterone

Progesterone plays a major role in pregnancy and regulation of the menstrual cycle. (27) The synthesis of progesterone from pregnenolone requires the enzyme 3βHSD, which is found primarily in the liver, brain, adrenal glands, breasts, gonads, and placenta. (53) CYP21 is responsible for the subsequent conversion of progesterone to corticosterone, which can then be converted to aldosterone via CYP11B2. (54) The primary function of aldosterone is to regulate salt and water homeostasis, which in turn regulates blood pressure. (8) CYP21 proteins are mainly found in the adrenal glands (53), though distribution has also been measured in the renal tubules, in the excretory ducts of the pancreas and salivary glands, and in the secretory ducts of the mammary glands. (66)

11βHSD helps to regulate cortisol levels in the body by facilitating the interconversion conversion of cortisol to cortisone. By deactivating cortisol to cortisone, 11βHSD protects mineralocorticoid receptors against overstimulation by cortisol, thereby conserving receptor binding potential for mineralocorticoids such as aldosterone. (53) 11βHSD is found in the liver, testes, lungs, fat, nephrons, placenta, and colon. (53)

DHEA is a hormone that has been linked to cardiovascular aging, fertility, metabolism, and central nervous system (CNS) function. (61) The synthesis of DHEA from pregnenolone or progesterone requires 17-hydroxylase and 17,20 Lyase (54), which are found in the gonads and adrenal glands. (53) The 17-hydroxylase and 17,20 Lyase enzymes are active in the zona reticularis of the adrenal cortex, where DHEA and other subsequential sex hormones can be derived from pregnenolone. 17-hydroxylase is also active in the zona fasciculata. (53) 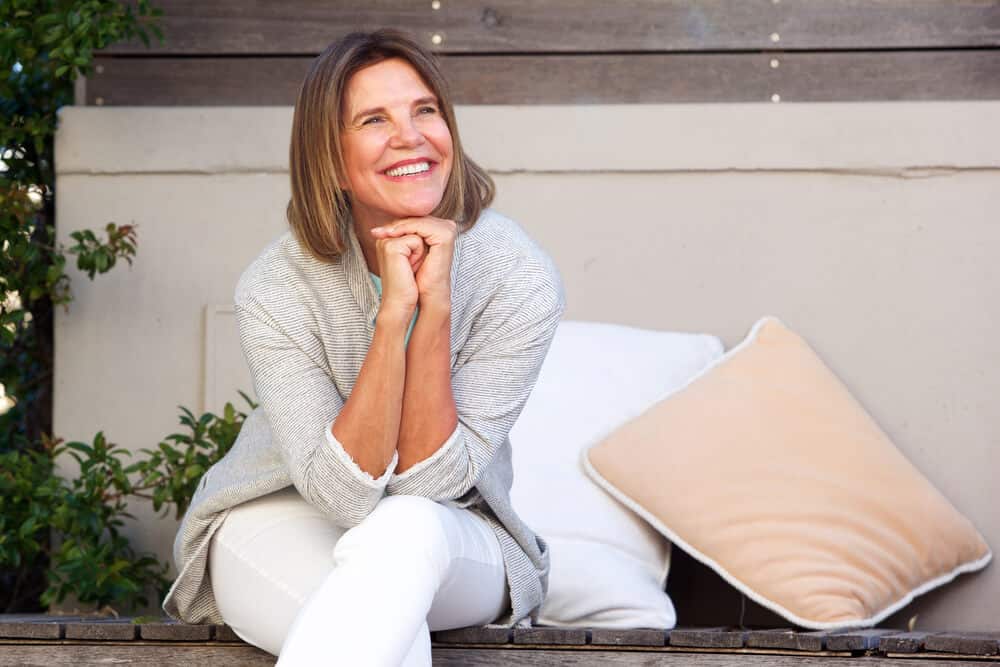 Pregnenolone is a naturally produced hormone that is needed for the production of several other hormones including, progesterone, testosterone, and estrogen.

The fates of DHEA

Similarly to pregnenolone, if DHEA is not exerting direct effects on the body, it may undertake two pathways to produce steroidogenic hormones and metabolites including:

These pathways are also interconnected, where hormones derived from DHEA can then be converted to other steroids using shared enzymatic pathways. (53)

DHEA to testosterone and DHT

Testosterone itself may also be converted to other steroidogenic hormones. One of the primary pathways is the production of DHT facilitated by the 5α-reductase enzyme found in the skin, prostate, and liver. (78) This enzyme functions to produce androsterone by reducing androstenedione (39), but also has other substrates including progesterone, 17-OH-progesterone, cortisol, cortisone, and corticosterone. (53) DHT is the major prostatic hormone involved in prostate growth, facial hair growth, male pattern baldness, acne, and male sexual differentiation during embryogenesis. (48)

DHEA to estrone, estradiol, and estriol

After DHEA is converted to androstenedione, estrogen hormones can be subsequently produced. CYP19, also known as aromatase, is the primary enzyme that converts androstenedione to estrone. CYP19 also has the ability to convert testosterone to estradiol. Aromatase is found in ovarian granulosa cells, as well as brain, fat, bone, and placenta tissues. (53) Both estrone and estradiol can be interconverted by 17βHSD.

The synthesis of estrone metabolites includes the production of 2-OHE1 by CYP1A1 or the production of 4-OHE1 by CYP1B1 (15), both of which can be subsequently methylated to 2-MeOE1 or 4-MeOE1, respectively. (17) Alternatively, CYP3A4 has high affinity in the hydroxylation of estrone to 16a-OHE1 (70), an intermediate which can ultimately produce estriol. Estriol is only present in pregnant females and represents 90% of all estrogens during pregnancy. (63) Estradiol is the main estrogen that circulates in women throughout the menstrual cycle (6) but drops off after menopause due to ovarian failure. (47) Estrone concentrations have been measured as three-fold higher than estradiol postmenopause. (6)

Ingredients that affect the steroidogenic pathways

The following table provides a list of ingredients that can either increase or decrease the production of hormones produced via the steroid pathway. 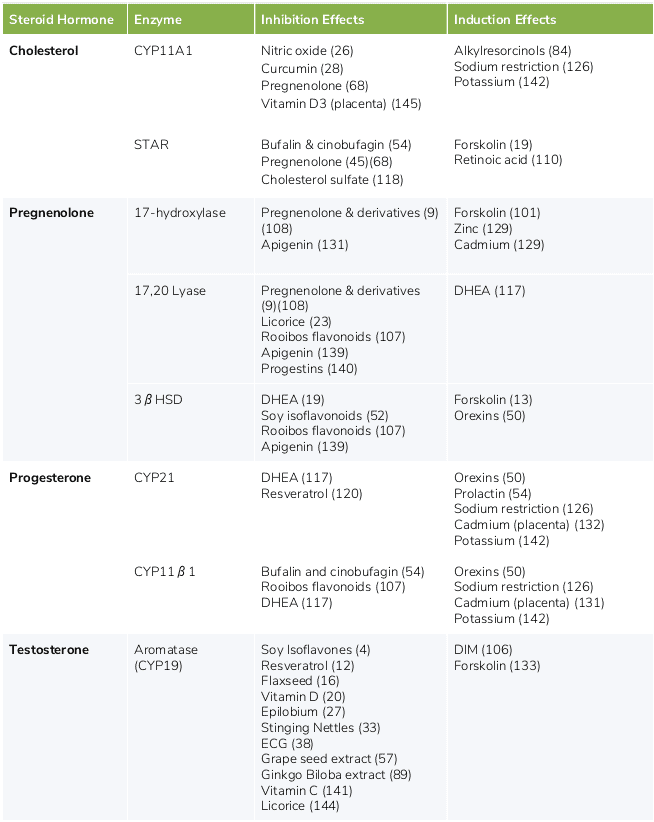 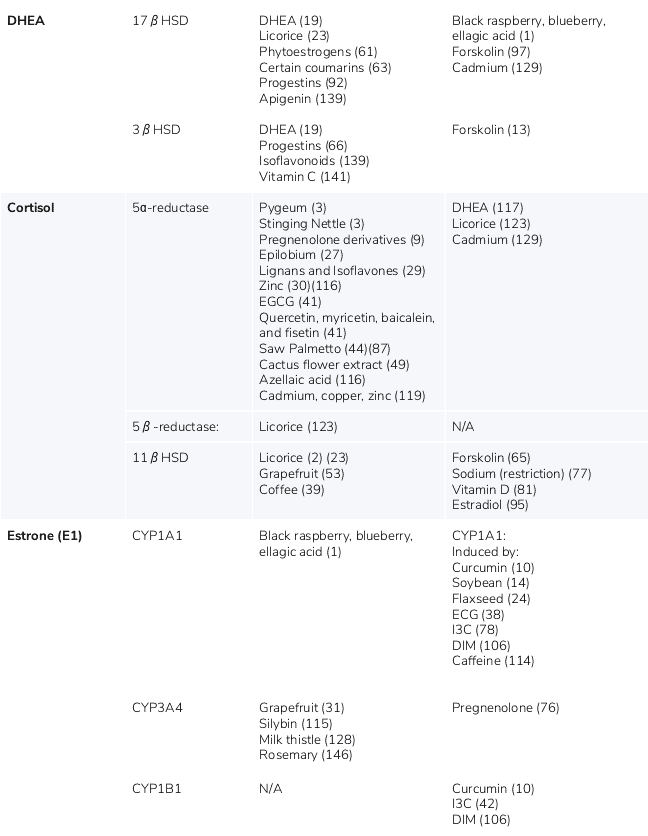