Fish oil is exactly what it sounds like: oil from the bodies of fish! Fish oil supplements as we know them today gained prominence after research from Denmark was released in the 1970s, indicating that people who ate diets rich in fish had less heart disease than those who didn’t. This led to a flood of research attention towards fish oil, which further illuminated that omega-3s in particular, and EPA and DHA specifically, imparted much of the cardiovascular benefit of fish oil. Cod liver oil was a widely used remedy in Europe for many conditions for centuries prior to the advent of today’s fish oil products. As a part of fish manufacturing in the 18th century, fish livers and gallbladders were often thrown into buckets and left to ferment. After a period of time, this oil was then consumed as a remedy for aches and pains, rickets, gout, and even tuberculosis.(1) It was through the observed effects on rickets that cod liver oil aided in the discovery and isolation of a well-known vitamin – vitamin D! In the past, one of the biggest knocks on cod liver oil was that its taste was horrible. You may have heard of people who were forced to take cod liver oil in childhood. This problem has largely been solved in today’s version of fish oil through improved processing, the addition of flavours to mask the taste, and the reduced use of fermented oil thanks to refrigeration.

How is it made?

Fish oil can be made from one or several different kinds of fish. The products commonly found on the market are made from the body oil of herring, sardines, mackerel, anchovy, salmon, or from the liver oil of cod fish. While not actually made from fish (since they are actually molluscs), there are also other “fish oils” made from squid and green lipped mussels as well. Larger fish like tuna, swordfish, and sharks can also provide the omega 3s that are desired in fish oil, but at a higher cost. Since these fish are higher in the food chain and live much longer, their body oil also contains heavy metals and other contaminants accumulated from the bodies of the smaller fish they eat. It is very rare that these fish provide the source of fish oil, and even for the smaller fish mentioned above, there are methods used to ensure that heavy metal content is minimal in fish oil products. Companies have to adhere to Good Manufacturing Practices in order for supplements to be sold, and the FDA has set some clear cutoffs of maximum allowable levels of heavy metals and other contaminants in food items. Some companies go above and beyond to ensure that their fish oil products have minimal heavy metals present. Third-party certifying bodies of dietary supplements such as NSF and USP, as well as fish oil specific standards, such as certification from the International Fish Oil Standard (IFOS), can help guarantee that fish oil products are safe and authentic for you, your family, and your patients. Various methods of processing help limit the heavy metals in fish oil products, as well as limiting oxidation of the oil. Fish oil, like any oil, can go rancid if it’s left in open air. Because of this, bottles of liquid fish oil are often “capped” with nitrogen gas during the manufacturing process to help prevent oxidation. Encapsulating fish oil instead of leaving it as a liquid is another way to prevent oxidation of the oil. As an added benefit, capsules don’t need to be refrigerated!

In which forms is it available?

As mentioned above, the source fish used when manufacturing fish oil can vary widely, but the one common denominator to all of the different kinds of sources is that they contain omega-3 fatty acids. The omega-3 fatty acids associated with positive health effects are EPA and DHA, so you’ll see most products quantified by the amount of

Fish oil products will often have the ratio of EPA to DHA posted somewhere on the bottle, as varying levels of EPA and DHA can have different health effects. Here are some examples:

For patients without allergies or dietary restrictions, fish oil products are the most suitable source of omega-3 fatty acids due to their high bioavailability, low cost, and accessibility for the patient.

While there is no true vegan “fish oil”, patients who follow a vegan diet can use oils made from algae or flaxseed to get a source of EPA and DHA as part of their nutrition. The doses are far smaller than what is in fish-based oils, but it’s a much better option than not including long-chain omega-3 fatty acids at all.

How does it work?

EPA and DHA are non-selective COX inhibitors, which acts like your typical non-steroidal anti-inflammatory drug (NSAID) medications, such as aspirin or ibuprofen. As a result, they are commonly used for their anti-inflammatory effects. Some patients are even able to reduce their NSAID use when taken in combination with a fish oil supplement, which reduces their risk for adverse events commonly related to NSAIDS.(3) One common misconception is that all omega-3s can be easily interchanged, but it’s not that easy. When someone isn’t able to or chooses not to eat fish, flaxseed oil is often presented as an alternative to fish oil as a source of omega-3s in fish’s absence. However, there is a large difference in structure between the alpha-linolenic acid (ALA) found in flax and long chain omega-3 fatty acids EPA and DHA (the fatty acids prominently found in fish oil). 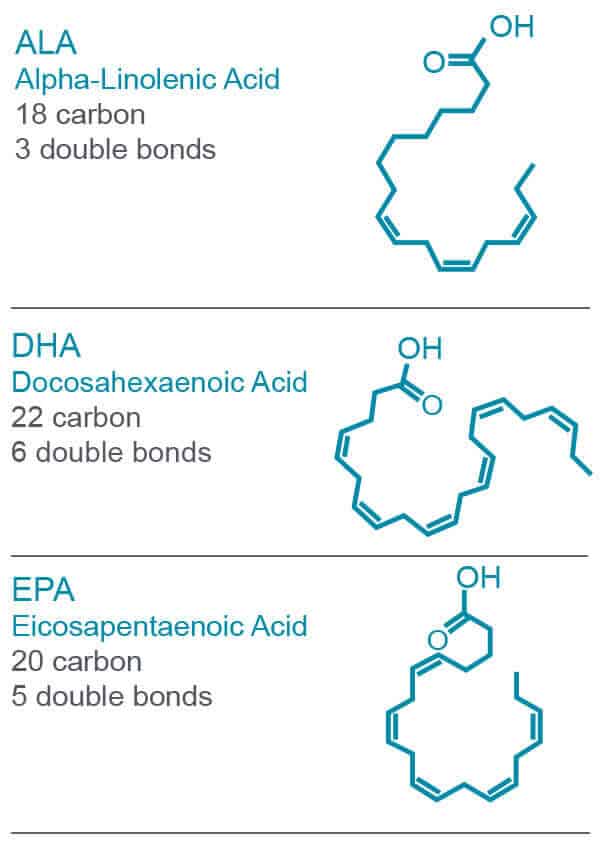 How can fish oil help?

Fish oil is well researched for its use in helping patients with mild to moderate depression, cardiovascular disease as well as various autoimmune and inflammatory conditions. You may have heard that “Fish oils make you shiny!”, and there’s some truth to this. Fish oil has been used for skin and hair conditions by supplying important omega-3 fats to the body, skin, and hair, making it stronger and giving it more lustre. In general, the omega-3s found in fish oil help the cells in our body move better. EPA and DHA are polyunsaturated fatty acids, which are much more “slippery” than their monounsaturated and saturated cousins. Since omega-3s are part of cell membranes, this means that cell membranes are more pliable and elastic, which can help our brain, blood vessels, skin, and hair to function and grow better.

Are there side effects?

Fish oil has many positive brain, heart health, and anti-inflammatory effects, and the majority of these effects are due to the fact that fish oil thins the blood and makes blood vessels less stiff. This is helpful for long term cardiovascular health and cognitive disease prevention, but thinning the blood can sometimes result in longer bleeding times by changing how well the blood is able to clot. This is particularly important for patients who are on blood thinners, have genetic bleeding conditions, play contact sports, or are about to have surgery or go to the dentist. Make sure that you always tell your doctor, dentist, or surgeon if you are taking a fish oil supplement – or any supplement for that matter. Although supplements are generally safe to consume, health care practitioners need to know about the supplements that you’re taking so they have all the information they need and can help you achieve the best possible health outcomes. Of all the omega-3 supplements, fish oil is most commonly linked to bleeding risk because of its higher levels of EPA and DHA. Other omega-3 products like flaxseed, squid, and krill oil have much lower doses of EPA/DHA, and subsequent lower bleeding risk. If you are following a vegan diet, algae oil and flaxseed oil are other omega-3 alternatives that you can use. Omega-3s can also be found in crustacean oils (krill, green lipped mussel, squid), but are not suitable for vegan patients.

Most Recommended on Fullscript