The Health Benefits of Chamomile

Chamomile is a white and yellow flower with several surprising health benefits. Research shows that chamomile may improve mental wellness, sleep quality, digestion, and reduce pain and inflammation. Keep reading to learn more about this impressive plant and the various chamomile benefits.

You may have heard of chamomile tea, but what is chamomile, and what is it good for? Chamomile is an ancient medicinal plant species from the Asteraceae family of flowering plants that provides a number of health benefits. It has thin spindly shaped roots, an erect stem, and a flower head that looks similar to white and yellow daisies. The chamomile flower’s yellow center is flat in the start of its growth and cone-shaped and hollow later on. (18)

Native to Southern and Eastern Europe, the chamomile plant has been around for thousands of years and was used as a medicinal herb by Ancient Egyptian, Greek, and Roman civilizations. The plant was brought to India 300 years ago and the country continues to be a large producer of chamomile products. Presently, chamomile grows in Australia, Africa, North America, Europe, and several other parts of the world. (18) 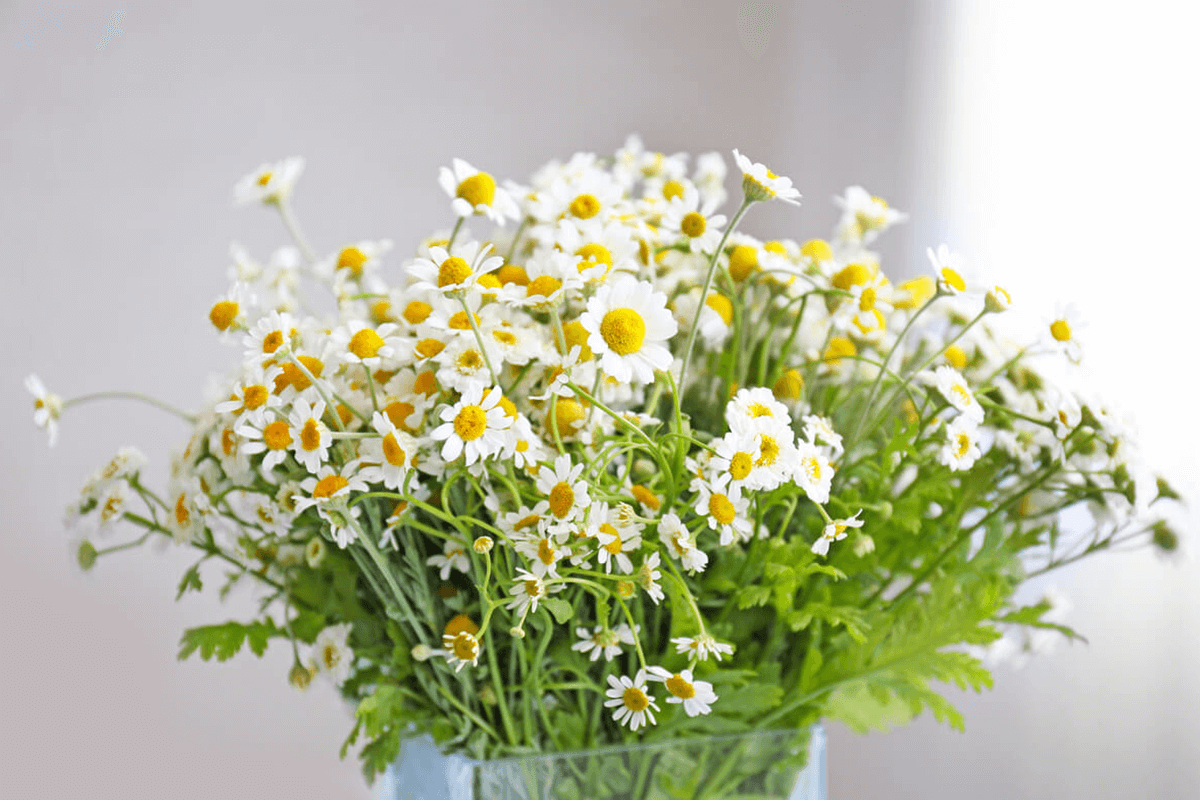 Chamomile flowers may look like daisies but their cone-shaped centers set them apart. (18)

Harvesting chamomile is one of the most labor-intensive and costly steps in the cultivation process. Harvesting chamomile flowers is a selective process, and only the flowers that are in full bloom should be picked. German chamomile plants can thrive in cooler temperatures between 2-20 °C (36-68 °F) and in a variety of soil conditions, including what is considered poor soil conditions for other plants (e.g., sand or clay). (18)

Did you know? The chamomile plant can thrive in what’s often considered poor soil conditions. (18)

Did you know? Essential oils are concentrated aromatic oils extracted from the bark, leaves, stems, fruit, and/or flowers of plants. (7)

Chamomile contains a wide variety of bioactive compounds including sesquiterpenes, flavonoids, coumarins, and polyacetylenes. Many of the bioactive compounds found in chamomile act as antioxidants in the body. Additionally, more than 120 chemical constituents (e.g., terpenoids, flavonoids) have been identified in chamomile as secondary metabolites—organic compounds produced by bacteria, plants, or fungi. Many of these components are antimicrobial (destroy microorganisms) or fungistatic (inhibit growth of a fungus). (18)

Chamomile may reduce feelings of anxiety and depression, however further well-controlled research studies are needed in this area. (2)(3)

A systematic review and meta-analysis of 12 randomized trials examined whether chamomile was effective for treating generalized anxiety disorder (GAD), state anxiety, sleep quality, and insomnia. Results showed that chamomile may be safe and effective for GAD and sleep quality. However, there was little evidence to support its efficacy for lessening state anxiety and insomnia, and further research is necessary. (10)

Often when we think of what chamomile tea is good for, its ability to improve sleep quality and promote relaxation comes to mind. Many people find that drinking chamomile tea before bed helps them relax and get a better night’s sleep. But does the evidence support these effects?

The sedative effects felt by many after drinking chamomile tea may be due to apigenin, a flavonoid that some studies have found binds to benzodiazepine receptors in the brain. (16) Benzodiazepine receptors are part of the gamma-aminobutyric acid (GABA) receptor complex and when they’re activated promote an inhibitory effect on the central nervous system. Certain medications prescribed to reduce anxiety and promote sleep are classified as benzodiazepines and bind to GABA receptors. (4)(9)(13)

A Tehran University of Medical Sciences study found that the sleep quality of 80 elderly people improved after four weeks of consuming chamomile extract. (1)

Similarly, a small study examined the sleep quality of 80 postnatal women having difficulty sleeping and determined that after two weeks of consuming chamomile tea, their sleep quality and mood had improved significantly compared to the control group. (5) 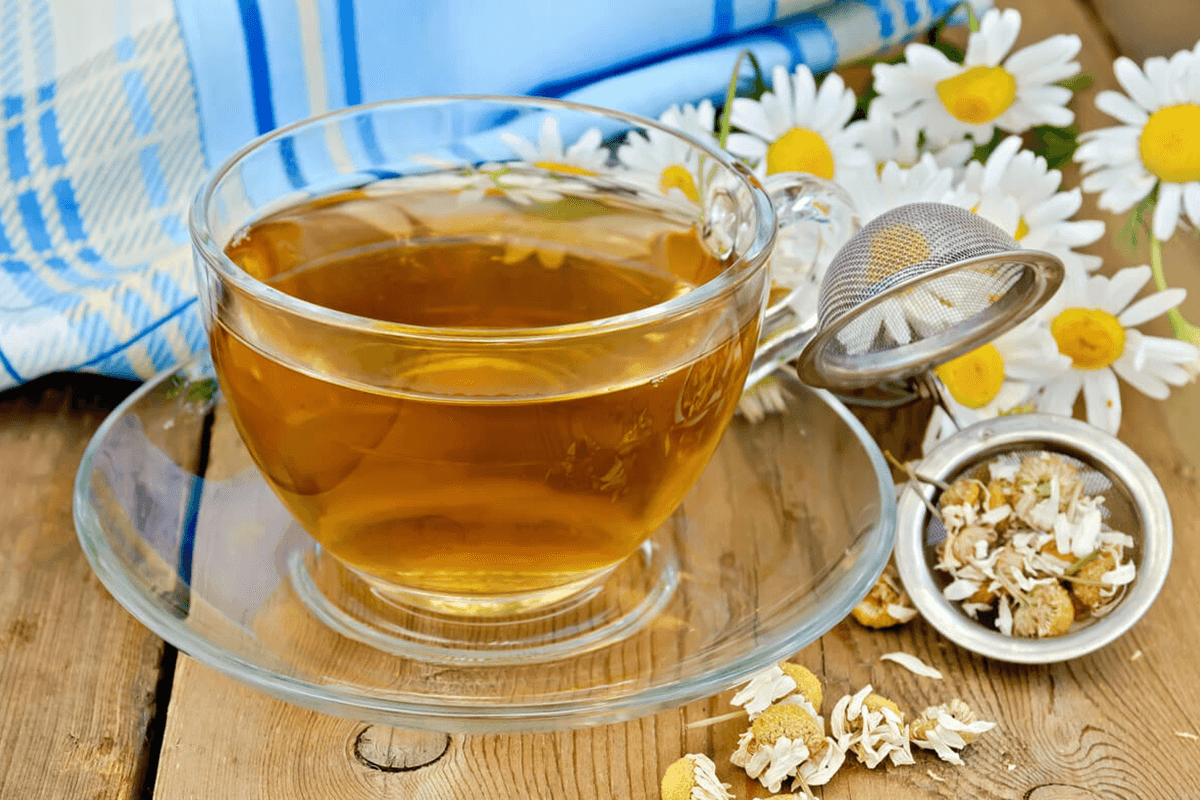 Chamomile tea is often made using the dried flowers of the chamomile plant but fresh chamomile flowers can also be used.

The anti-inflammatory effects of chamomile flowers may help reduce certain types of physical pain. Chamomile has traditionally been used to help reduce pain in those experiencing headaches, rheumatic (joint) pain, menstrual pain, and other inflammatory-related symptoms. (9)

Chamomile may help alleviate certain symptoms of premenstrual syndrome (PMS). (11) PMS is a set of physical and emotional symptoms that occur during the luteal phase of the menstrual cycle, such as fatigue, abdominal pain, back pain, headache, breast tenderness, anxiety, depression, and irritability. (8) A systematic review that examined eight studies on the effects of chamomile on PMS symptoms determined that chamomile (i.e., extract, capsules, oil, or tea) has anti-inflammatory, sedative, anti-anxiety, and antispasmodic effects that may help relieve pain and unwanted psychological aspects of PMS. (11)

A 2015 study published in the Journal of Complementary Therapies in Clinical Practice determined that topical application of chamomile oil significantly decreased the need for patients with knee osteoarthritis to take acetaminophen (Tylenol) for pain. (17)

Chamomile essential oil, applied topically in a lotion or in combination with a carrier oil, may help to reduce a skin rash. It may also reduce breakouts thanks to its anti-inflammatory and antibacterial properties. In addition, chamomile products may be helpful in reducing symptoms associated with gout, atopic dermatitis (eczema), hemorrhoids, and ulcers. (9)

Chamomile may be more effective than hydrocortisone cream for healing certain skin lesions. A 2011 Iranian study compared the efficacy of a German chamomile compress to topical steroids on peristomal (the skin surrounding) skin lesions in 72 patients who had received a colostomy, a procedure that creates an opening in the stomach for the large intestine. Results demonstrated that the peristomal skin lesions treated with the chamomile solution healed (resolved) significantly faster than those treated with the medical hydrocortisone cream. (6)

An animal study that examined the use of oral chamomile oil in rats with diarrhea (induced with castor oil) determined that the rats who consumed the chamomile had less symptoms associated with diarrhea, suggesting that chamomile may have antidiuretic properties. (14) 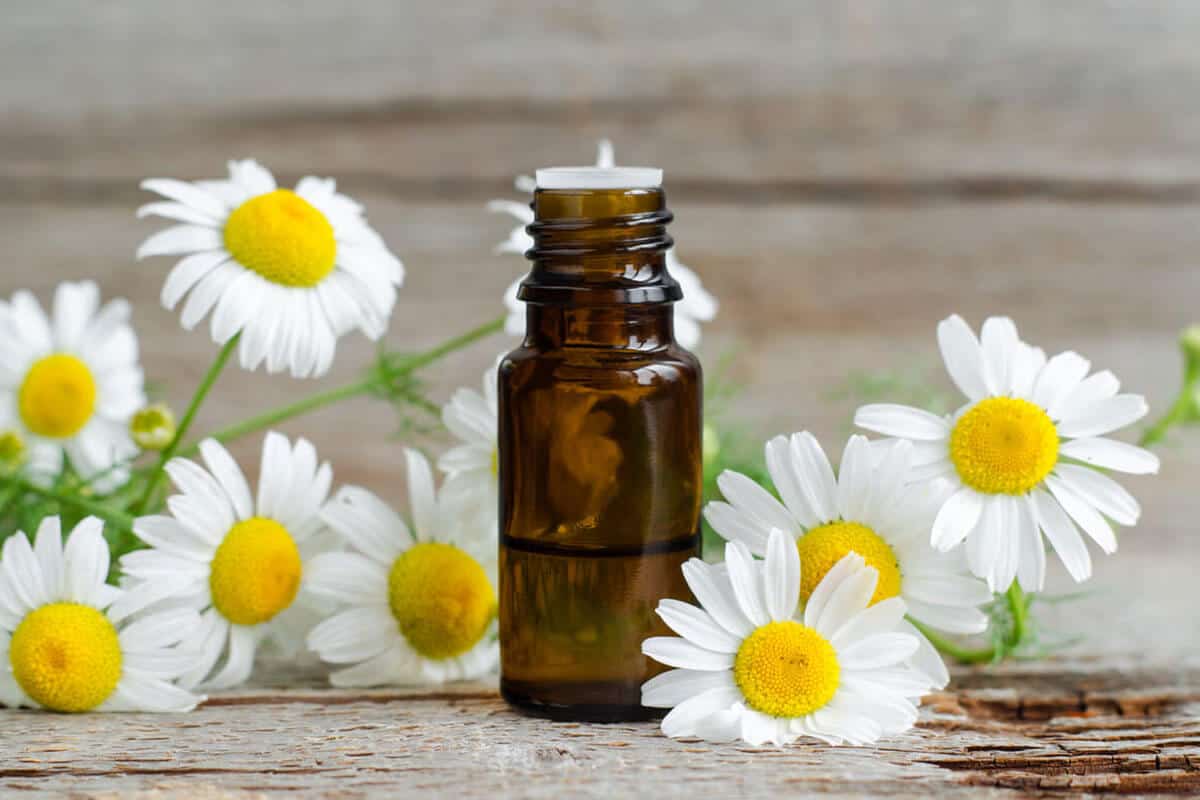 Chamomile is used to make tea, essential oils, supplements, and may be added to self-care products such as facial cleansers.

How to use chamomile

There are many ways to consume chamomile in order to benefits from its therapeutic properties, including:

Chamomile has been used for centuries to support people with a variety of health concerns, including pain, skin health, wound healing, digestion, sleep, and mental wellness.

If you have seasonal allergies to ragweed or flowers in the daisy family, you may experience an allergic reaction to chamomile. Be sure to consult with your qualified medical practitioner before incorporating chamomile into your diet or self-care routine.