Vinegar, which is produced from various fermentable carbohydrates such as grapes and apples, comes from the French word “vin aigre” meaning sour wine. (8) Vinegar is rich in nutrients and bioactive compounds such as polyphenols, and it has been used for more than 3,000 years for a number of medicinal and culinary applications. (12) Apple cider vinegar is a popular vinegar with many uses and benefits. Keep reading to learn about the health benefits of apple cider vinegar and how you can easily incorporate this versatile vinegar into your diet.

What is apple cider vinegar?

Vinegars, such as apple cider vinegar (ACV), are produced using a process known as fermentation. (1) Apple cider vinegar is made by crushing apples into apple juice and allowing natural yeasts to consume and digest the simple sugars in the juice. This process produces alcohol. (1) Next, the acetic acid bacteria (AAB), which are present everywhere in the environment, oxidize the alcohol into acetic acid, a compound that gives vinegar its sour flavor and aroma. (1)(6)

The apple cider vinegar fermentation process produces a culture of yeast and AAB that grows on the surface of the vinegar known as the “mother”. The mother culture is a non-toxic, slimy mass that is safe to consume and is visible inside unfiltered ACV bottles. (8) Although some people believe that the mother increases the health benefits of ACV due to its probiotic (beneficial bacteria) content, more research is needed to support this claim. (8)

In comparison, some manufacturers pasteurize and filter their ACV to remove or prevent the mother culture from forming. However, the mother may re-form once the bottle has been opened. (8) 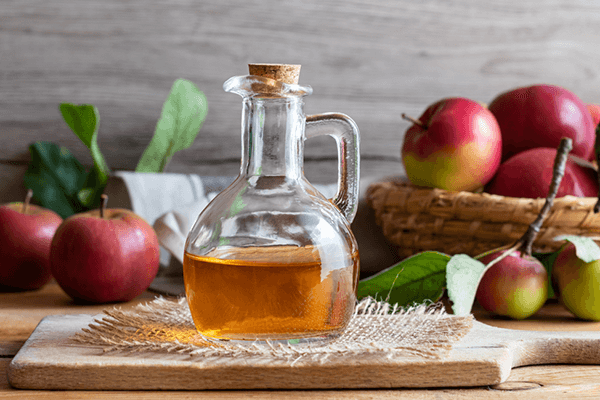 Apple cider vinegar may contain a “mother”, which is a slimy mass made up of yeast and bacteria formed during acetic acid fermentation.

ACV may have antimicrobial, antioxidant, blood sugar regulation, and weight management effects. More controlled research studies with humans are necessary in order to confirm these benefits and to determine the mechanisms involved.

Apple cider vinegar may have antimicrobial capabilities, which can affect the growth of certain potentially harmful microbes. (13) A preliminary in vitro study that examined the antimicrobial activity of ACV on various bacterial strains, including E. coli, S. aureus, and C. albicans, determined that ACV impaired the cell integrity, structural and metabolic proteins, and nuclear materials of these microbes. These results suggest that ACV has antimicrobial effects and that further research to identify the constituents of ACV that promote this activity are warranted. (13)

Antioxidant-rich diets may have beneficial effects on individual cardiovascular risk factors such as oxidative stress. (14) One study examined whether apple cider vinegar could affect the cardiovascular risk of obese rats fed a high-fat diet (HFD). The study determined that after six weeks on a HFD, oxidative stress had increased. However, following the introduction of daily ACV consumption, parameters such as serum total cholesterol and oxidative stress were reduced significantly. These findings suggest that ACV may be beneficial in suppressing oxidative stress induced by a HFD in obese rats by modulating (regulating) their antioxidant defense system. (4) More research is needed to confirm these effects in humans.

Researchers continue to examine the relationship between ACV intake and blood sugar levels. Some studies have demonstrated that apple cider vinegar may reduce the glucose response to complex carbohydrates in subjects with and without type 2 diabetes. (10) Future research is necessary to determine how ACV may alter the body’s glucose response after consuming carbohydrates. Two mechanisms responsible for these effects have been proposed. The first suggests that organic acids present in ACV, particularly acetic acid, may impact enzymes responsible for breaking down disaccharides (a carbohydrate subgroup that includes sucrose, lactose, and maltose), while another proposes that ACV induces delayed gastric emptying, the rate at which food leaves the stomach. (10)

One study, conducted in individuals with type 2 diabetes, found that blood sugar levels, both fasted and post-meal, were significantly lower in those who had consumed 15 mL of apple cider vinegar twice per day before eating compared to those who had not. In this case, the authors suggest that the organic acids and phenolic compounds present in ACV may have contributed to these antidiabetic effects. (11)

Another study conducted in diabetic mice found that blood sugar and serum amylase (the enzyme that breaks down carbohydrates) levels were significantly decreased after ACV had been added to their water supply for 7 days. Researchers concluded that the mechanism of action responsible for these results warrants further research. (7)

Apple cider vinegar may have an effect on weight management. Some research indicates that vinegar including ACV may affect appetite by delaying gastric emptying. (5)

A randomized clinical trial examined the effect of dietary modifications, including AVC consumption, on weight management in individuals with a high body mass index (BMI). A total of 39 individuals, separated into two groups, were put on a calorie-restricted diet for 12 weeks. One group consumed 1 tbsp of apple cider vinegar with lunch and dinner (2 tbsp per day), while the other group didn’t consume any ACV with meals. Results demonstrated that after 12 weeks, the ACV group lost an average of 8.8 lb, and the control group that did not consume ACV lost an average of 5 lb. Body weight and BMI were both reduced significantly in the ACV group. (9)

Apple cider vinegar is a versatile and inexpensive product that can be purchased at your local grocery store. Be sure to dilute ACV with water to reduce the drink’s acidity if you’re consuming it as part of a beverage. Consider incorporating ACV into your routine in one or more of the following ways:

Apple cider vinegar, which is created by fermenting the juice of apples, has many uses and health benefits. Apple cider vinegar may have antimicrobial capabilities and has been shown to have an effect on blood sugar control and weight management. ACV also contains health-promoting constituents such as organic acids and antioxidants. ACV can be easily incorporated into the diet by using it to make salad dressings and marinades or by adding a tablespoon to a mixed mocktail, for example. More controlled research studies are necessary to confirm the health benefits of apple cider vinegar. If you’re a patient, always speak to your healthcare practitioner before making any changes to your health regime.

One comment on “The Surprising Health Benefits of Apple Cider Vinegar”