If you’ve ever gotten Chinese takeout or slurped your way through a steaming bowl of pho, you’ve no doubt eaten shiitake mushrooms. These edible mushrooms are one of the most popular culinary fungi in the world and are often used in Chinese, Japanese, Korean, and Vietnamese cooking. Shiitake mushrooms also play a starring role in Traditional Chinese Medicine (TCM) and other Asian healing modalities thanks to their wealth of health benefits.

Did you know? Shiitake mushrooms were first cultivated in 1100 AD during China’s Song Dynasty. (1) Today, because of increasing demand, shiitake mushrooms are commercially grown all over the world. (17) 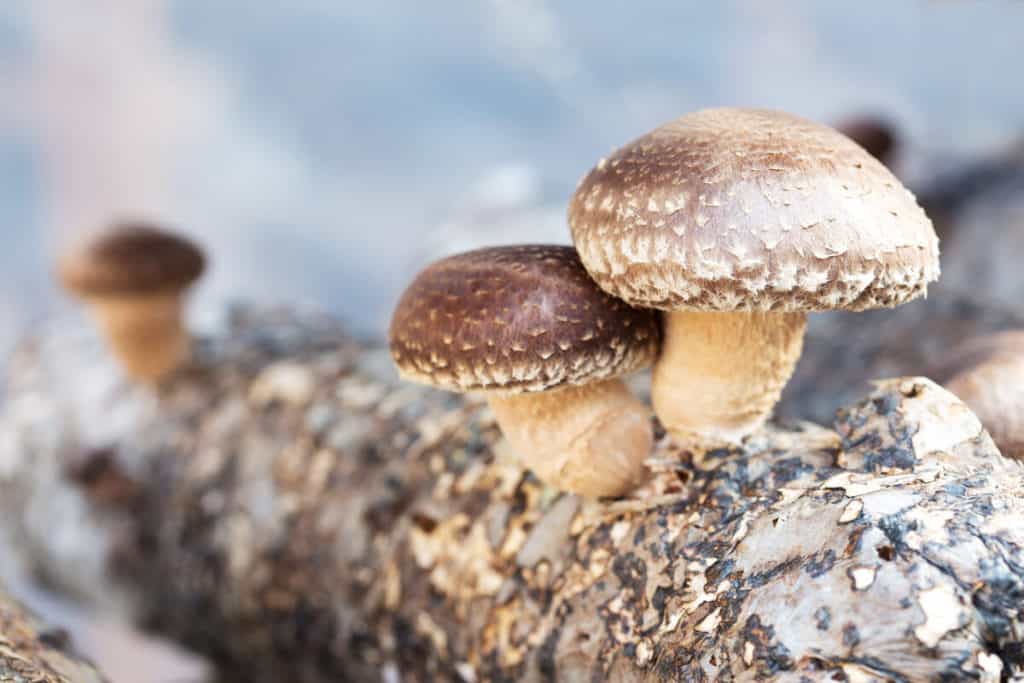 Shiitake mushrooms originally grew wild on fallen trees in Japanese forests. Today, they are commercially grown on synthetic logs or in bags of nutrient-enriched sawdust.

What are shiitake mushrooms?

Technically known as Lentinula edodes, shiitake mushrooms originally grew wild on fallen trees—especially the shii tree—deep in the forests of Japan. In fact, the name “shiitake” translates to “mushrooms of the shii tree.” These wild mushrooms were so highly prized that only Samurai warriors were allowed to collect them. (12)

Today, this fungi is valued for its earthy flavor and its impressive nutritional profile. Rich in choline, copper, potassium, vitamin D, and zinc, shiitake mushrooms also boast all eight essential amino acids found in meat. (15)(7)(25) This, along with shiitake’s meaty texture and earthy flavor, make it a great meat substitute in vegan and vegetarian dishes.

But these nutrients are only part of the picture. Shiitakes also provide a wealth of compounds responsible for the mushroom’s medicinal benefits. These include the polysaccharide lentinan, eritadenine, water-soluble lignins, centinamycins A and B, beta glucans, alpha-1,4-glucan oligosaccharides, and triterpenes. (13)(5) These compounds give shiitake mushrooms their beneficial health properties.

Shiitake mushrooms have been used for centuries to prevent and treat a number of ailments. Modern medicine has confirmed many of these uses. Here are five of the most well-researched health benefits these medicinal mushrooms provide.

Shiitake mushrooms possess antioxidant, anti-inflammatory, anti-microbial, and antiviral properties that support a healthy immune response. (13)(24) For example, the lentinan in shiitakes protect against a variety of bacterial, viral, and parasitic infections. The centinamycins have been shown to boast antibacterial benefits and eritadenine possesses antiviral properties. In addition, the lignins from the mushroom’s fruiting bodies (mycelium) have antiviral and immunomodulating effects. (13)

Shiitake mushrooms have also been found to reduce triglyceride levels by as much as 55% in rats. (23)

The bioactive compounds in shiitake mushrooms may also directly prevent atherosclerosis. Preliminary studies have found that the compounds in shiitakes inhibit the accumulation of cholesterol, calcium, fibrin, and cellular debris in artery walls. This, in turn, helps to prevent the buildup of arterial plaque that can narrow and stiffen arteries. (11)(16)

As a result of the vitamin D present in mushrooms, shiitakes may help strengthen bones by aiding in the absorption of calcium and inhibiting bone resorption. One cell study found that a combination of shiitake, maitake, and turkey tail mushrooms inhibited osteoclast activity (the action of breaking down bone). The study also found that shiitake, by itself, increased bone mineralization and the production of a bone building compound known as osteocalcin. (4)

Did you know? Mushrooms that have been exposed to a source of ultraviolet (UV) radiation, such as sunlight or a UV lamp, are the only plant-based source of vitamin D. However, mushrooms produce vitamin D2, which is not absorbed or utilized as effectively by the body as vitamin D3. (20) 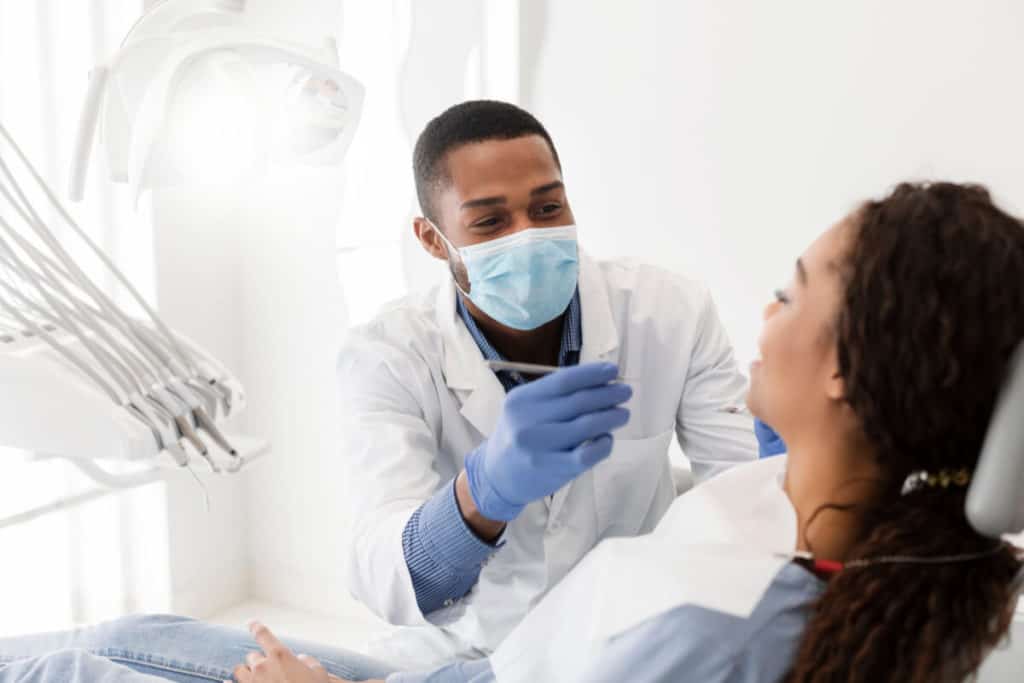 Shiitake mushrooms may help keep your smile bright by protecting teeth and gums from the harmful bacteria that can lead to cavities and gum disease.

There’s also some evidence that the anti-microbial and anti-inflammatory properties of shiitake mushrooms improve dental health. British researchers have reported that the antibacterial compounds in a shiitake extract reduce harmful bacteria that causes gingivitis. (2) Another study that appeared in the journal Pharmacognosy Review found that these same compounds inhibit plaque-building bacteria that can lead to cavities. (1) Together, these findings suggest that shiitakes may be a beneficial addition to your oral health routine.

The eritadenine and beta-glucan in shiitake mushrooms may support a healthy weight. While human studies haven’t yet been conducted, animal studies have found that rats fed a diet high in shiitake mushrooms had 35% less weight gain than rats eating a diet low in the fungi. (9) More recent research suggests that the antioxidant and anti-inflammatory properties in shiitake and other medicinal mushrooms help protect against obesity-related conditions like high cholesterol and metabolic syndrome. (6) While more research needs to be done, these findings are promising for those struggling with weight issues.

The earthy flavor and meaty texture of shiitake mushrooms make them a low-calorie, nutrient-packed substitute for meat in soups, stews, and stir-frys.

How to use shiitake mushrooms

Shiitake mushrooms are available fresh or dried in most grocery stores. If you opt to add fresh shiitakes to your meals, look for mushrooms that are firm yet supple. The skin should bounce back when pressed. Fresh mushrooms should be stored in a paper bag in a cool, dark environment. Be sure to clean them before using by wiping the caps with a damp paper towel.

Dried mushrooms have a more intense, slightly smoky flavor and can be easily reconstituted in boiling water for 20 minutes. They can then be used in the same way you would use fresh shiitakes.

Shiitakes provide an umami quality to dishes, so consider using them in savory soups or stir-frys. You can add them to eggs or rice and noodle dishes, and they are also delicious on their own when sauteed in either sesame oil or butter and garlic.

If you’re not a fan of eating shiitake mushrooms, you can still enjoy their health benefits by taking a shiitake supplement. Talk with your health care practitioner to determine the appropriate dose for your individual needs.

Shiitake mushrooms are generally safe to consume, especially when used in cooking. However, in rare cases, some people have developed a skin condition known as shiitake dermatitis when they were exposed to raw shiitake mushrooms. (21) The long-term use of a powdered mushroom extract may also cause stomach upset and a sensitivity to sunlight. (14)(8)

Shiitake mushrooms are a tasty way to enhance your health. They’ve been used for thousands of years as both food and medicine. Packed with nutrients and healthful compounds, research suggests that these earthy mushrooms may improve immunity, protect your heart, boost bone health, guard against cavities and gingivitis, and even help you maintain a healthy weight. Available fresh, dried, or in supplement form, shiitake mushrooms are an excellent addition to a healthy lifestyle.