What Is Iron Deficiency Anemia?

If you often feel fatigued, sluggish, or dizzy, your body might not be getting the iron it needs to function optimally. Iron deficiency anemia, which can result from inadequate iron intake or various contributing factors such as certain gastrointestinal conditions, heavy bleeding during menstruation, or even frequent blood donations, is the most common form of anemia (deficiency of red blood cells or hemoglobin in the blood) affecting people worldwide. (22) Read on to learn more about what causes iron deficiency anemia and how it can be addressed. 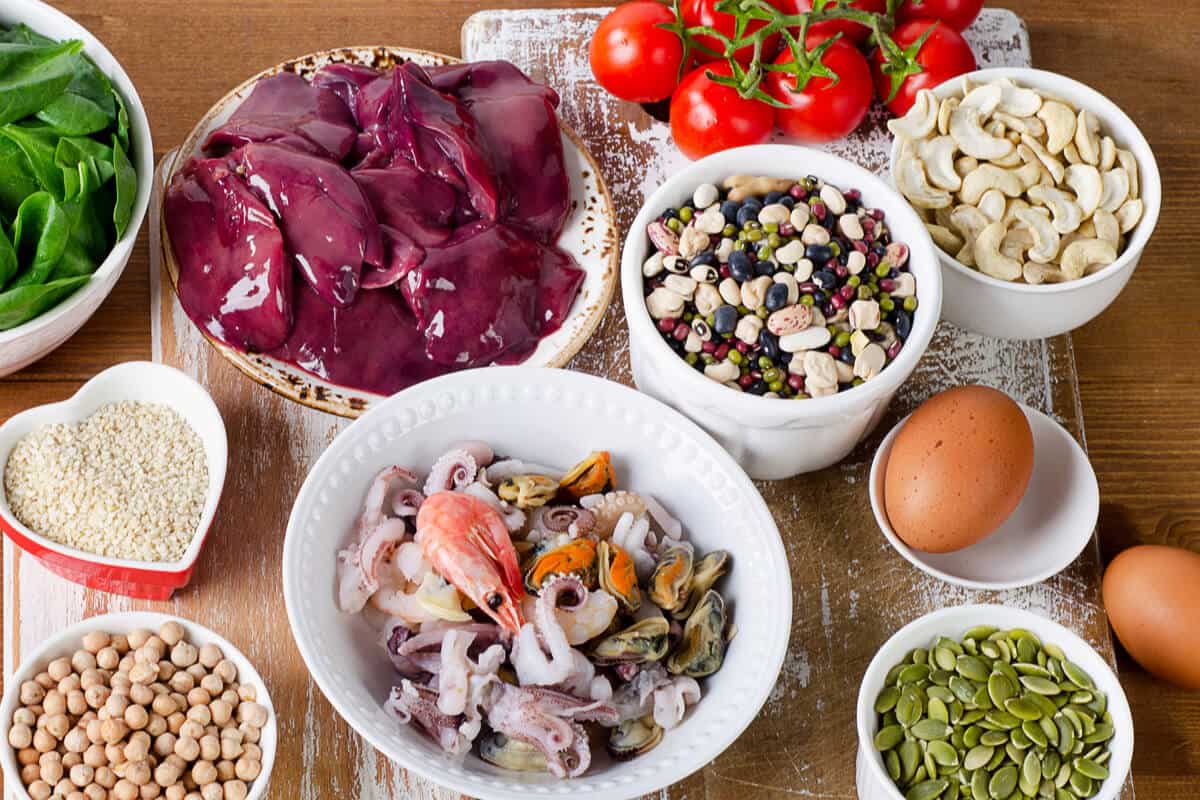 Iron is found in various plant and animal-based foods.

Iron is a mineral that is an essential component of hemoglobin, a constituent of red blood cells that transports oxygen from the lungs to the muscles, organs, and other tissues. In addition to being responsible for oxygen distribution, iron is necessary for physical growth, neurological development, cellular function, and hormone synthesis. (18)

Dietary iron is found in two forms: heme and non-heme. Heme iron is a form of iron that is well absorbed and found in animal protein sources, including meat, poultry, and fish. Approximately 95% of the functional iron in the body is in heme form. Non-heme iron, which is found in plant-based foods such as legumes, nuts, and seeds, is less bioavailable than heme iron and therefore is less easily absorbed by the body. (10) 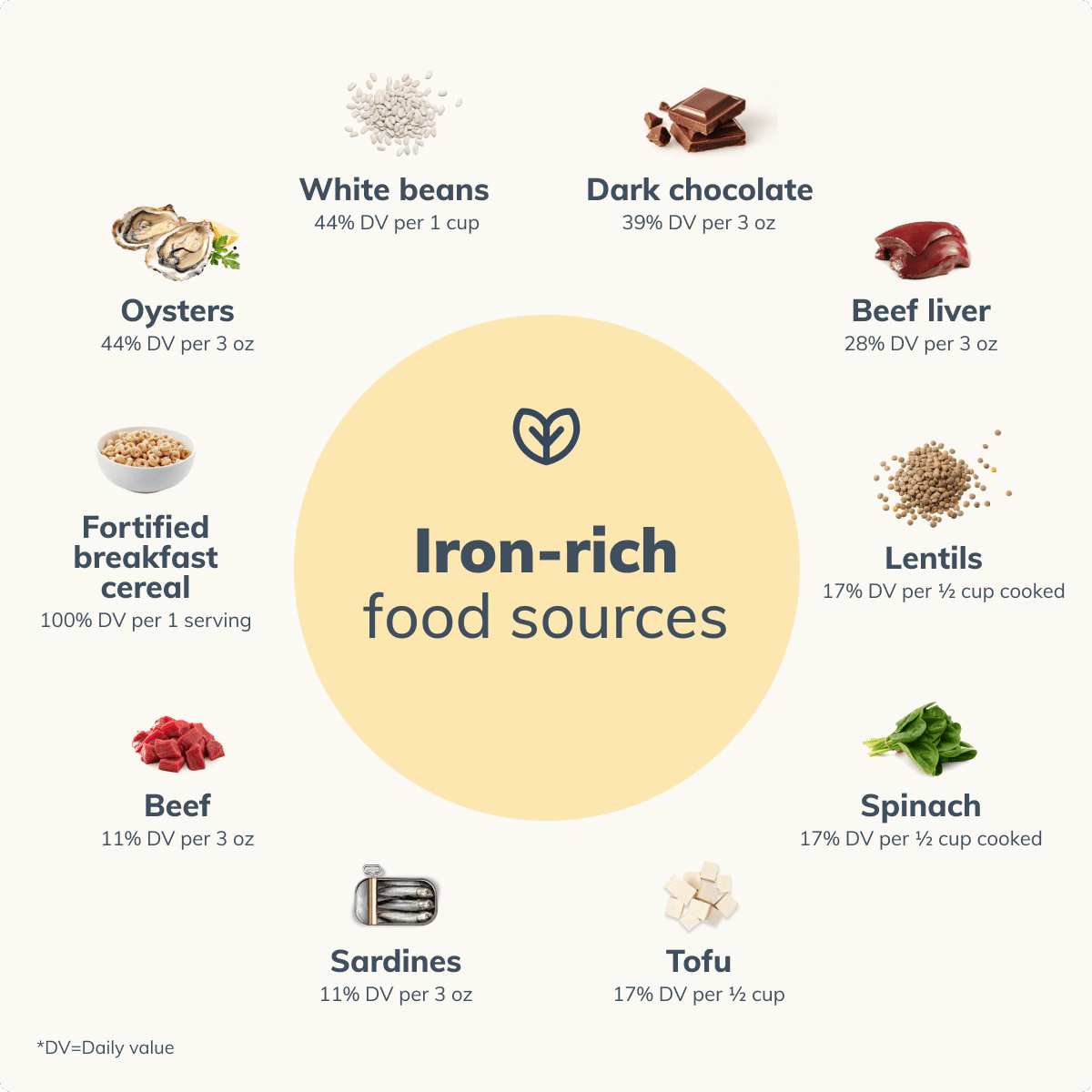 Eat various sources of iron to meet your daily needs. (10)

How much iron do you need?

Recommended Dietary Allowances (RDA) for iron vary depending on your age and sex. The table below outlines the RDA for iron for all ages. 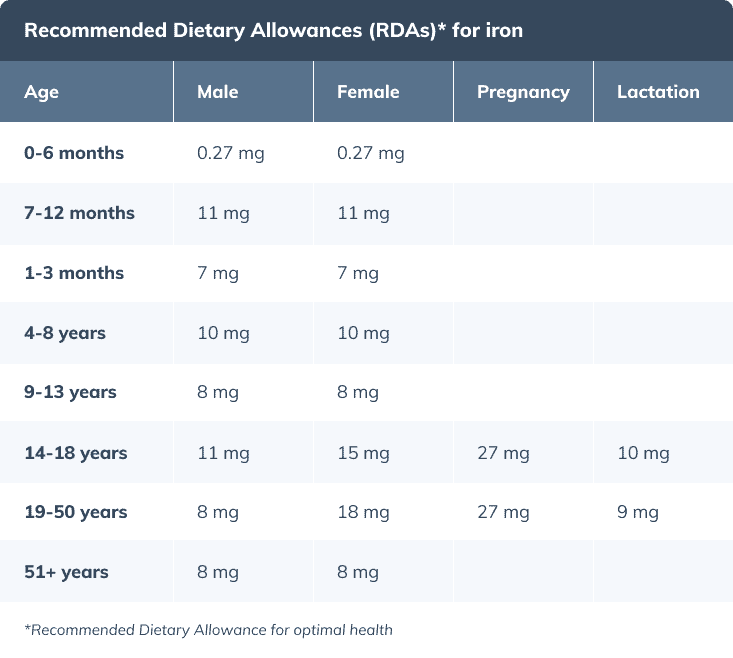 Iron needs change throughout the lifecycle. (18)

What is iron deficiency anemia?

Possible signs and symptoms of iron deficiency include:

Your practitioner can determine whether you have iron deficiency anemia by ordering a complete blood count (CBC), a simple blood test that measures hemoglobin and hematocrit (proportion of red blood cells in the blood) levels (12) and mean corpuscular volume (MCV) (average size of red blood cells). (13) They may also test for other indicators of iron stores, including iron-binding capacity (TIBC), serum ferritin, serum iron level, and serum hepcidin level. (14)(17)

Who is at risk of iron deficiency?

Outlined below are the various populations that are at risk of iron inadequacy and/or iron deficiency anemia.

Infants and children have high iron requirements to accommodate their rapid growth. Infants born prematurely, with low birth weight, or to iron-deficient mothers are at increased risk of iron deficiency. Infants born with sufficient iron stores are generally resistant to iron deficiency for their first four to six months of life; however, they may be more susceptible to deficiency after six months of age if they don’t get enough iron through diet (e.g., breastmilk, iron-enriched formula) alone. (18)

Endurance athletes, especially young female endurance athletes such as marathon runners, are at increased risk of iron deficiency. Endurance athletes experience iron deficiency at higher rates because they lose iron through a process known as hemolysis, the breakdown of red blood cells. Hemolysis can result from the repeated striking of the feet caused by running. (17) Other endurance sports requiring intense and sustained efforts, such as cycling, can reduce blood hemoglobin, ferritin, and serum iron. (4) 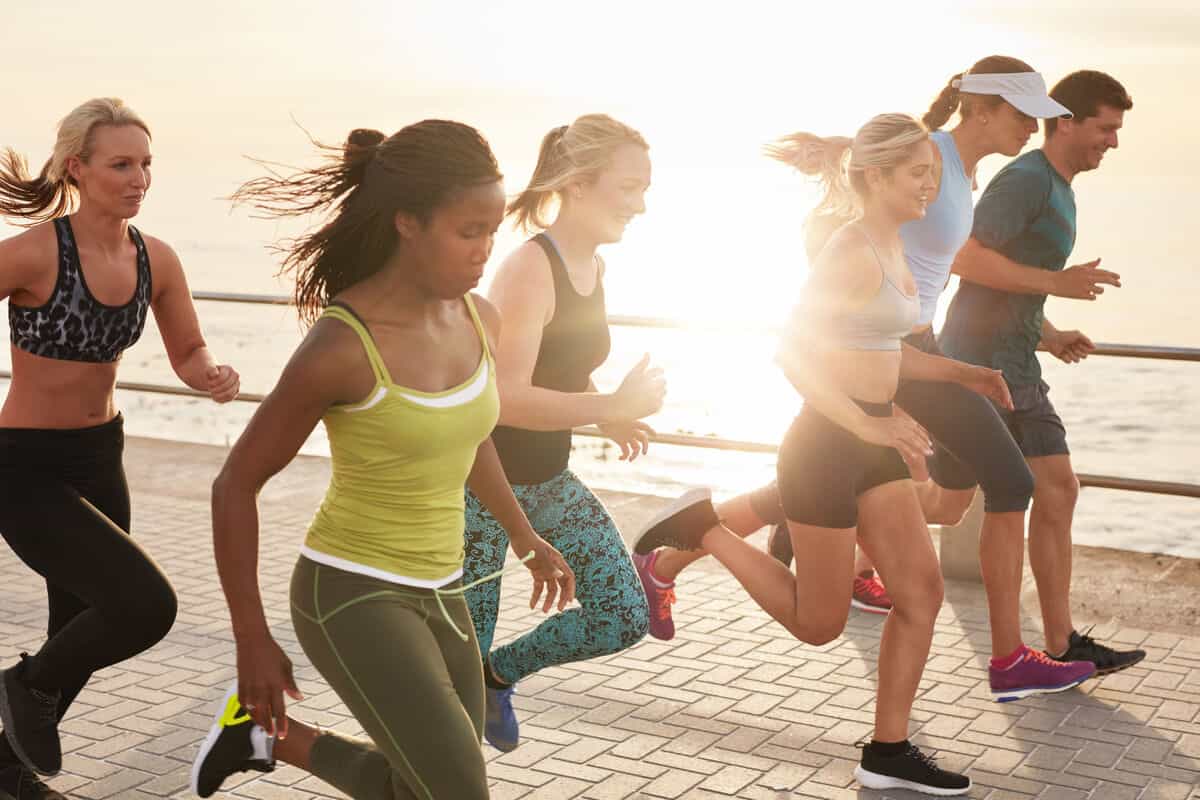 Marathon runners and other endurance athletes are at increased risk of iron deficiency anemia.

Donating blood too often can deplete iron stores, leading to iron deficiency. In fact, approximately 25 to 35% of frequent blood donors develop iron deficiency. In the United States, donors can give blood every eight weeks; however, individuals who are prone to iron deficiency are often advised to adjust their donation intervals and consume more iron through diet and supplementation. (5) If you routinely donate blood, speak to your practitioner for guidance.

Some conditions affecting the gastrointestinal system, such as celiac disease, ulcerative colitis, or Crohn’s disease, impact nutrient absorption and typically require dietary restrictions, contributing to iron deficiency. Individuals who have undergone gastrointestinal surgery, such as a gastrectomy (partial or whole removal of the stomach) or intestinal resection, may also experience iron malabsorption. (18)

Opting not to eat meat or other animal-based proteins can increase the risk of iron inadequacy. A 2018 meta-analysis demonstrated that vegetarians are more likely than non-vegetarians to have low iron stores. (8) Although many plant-based foods contain iron, they aren’t as efficiently absorbed by the body. The reduced bioavailability of non-heme, plant-based iron sources is mainly due to naturally-occurring absorption inhibitors such as phytates, oxalates, and polyphenols. (20) If you follow a plant-based diet, consult your integrative practitioner for help meeting your iron requirements.

In pregnancy, blood volume rapidly increases to meet the needs of the growing fetus and placenta. As a result, iron needs increase during pregnancy, and iron deficiency increases the risk for infant and maternal mortality, miscarriage, premature birth, and low birthweight. (2)(18)

Individuals who menstruate, particularly those with abnormally heavy bleeding (menorrhagia), are at increased risk of iron deficiency. (18) In people of reproductive age, blood loss during menstruation is the leading cause of iron deficiency anemia. (16)

The two primary treatment options for iron deficiency anemia include the consumption of iron-rich foods and/or iron supplements. 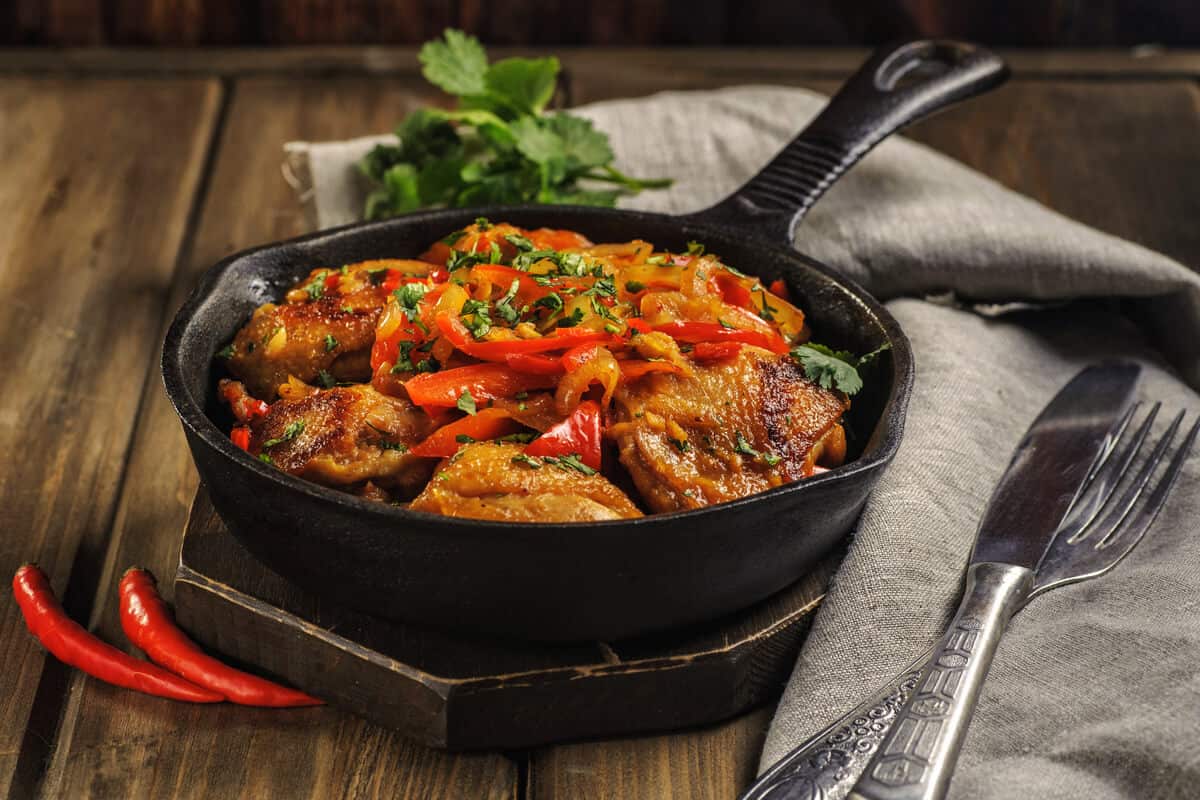 Cooking food in a cast iron pan can add significant amounts of iron to your meals.

Consuming a balanced diet that includes various iron-rich foods is an effective strategy for preventing and addressing iron deficiency. (18) In a small clinical trial of women with mild iron deficiency, participants were either given an iron supplement, placebo, or provided with dietary counseling to improve intake and bioavailability of dietary iron. The study demonstrated that the diet group experienced a 26% increase in serum ferritin levels and the supplement group noted an increase of 59% after 16 weeks compared to placebo. Although diet didn’t increase serum ferritin levels as significantly as iron supplements, this study demonstrated the potential of diet for addressing mild iron deficiency. (9)

Enhancing iron bioavailability in your diet can help improve iron stores or prevent deficiency. You can improve the bioavailability of the iron in your food by using the following strategies: 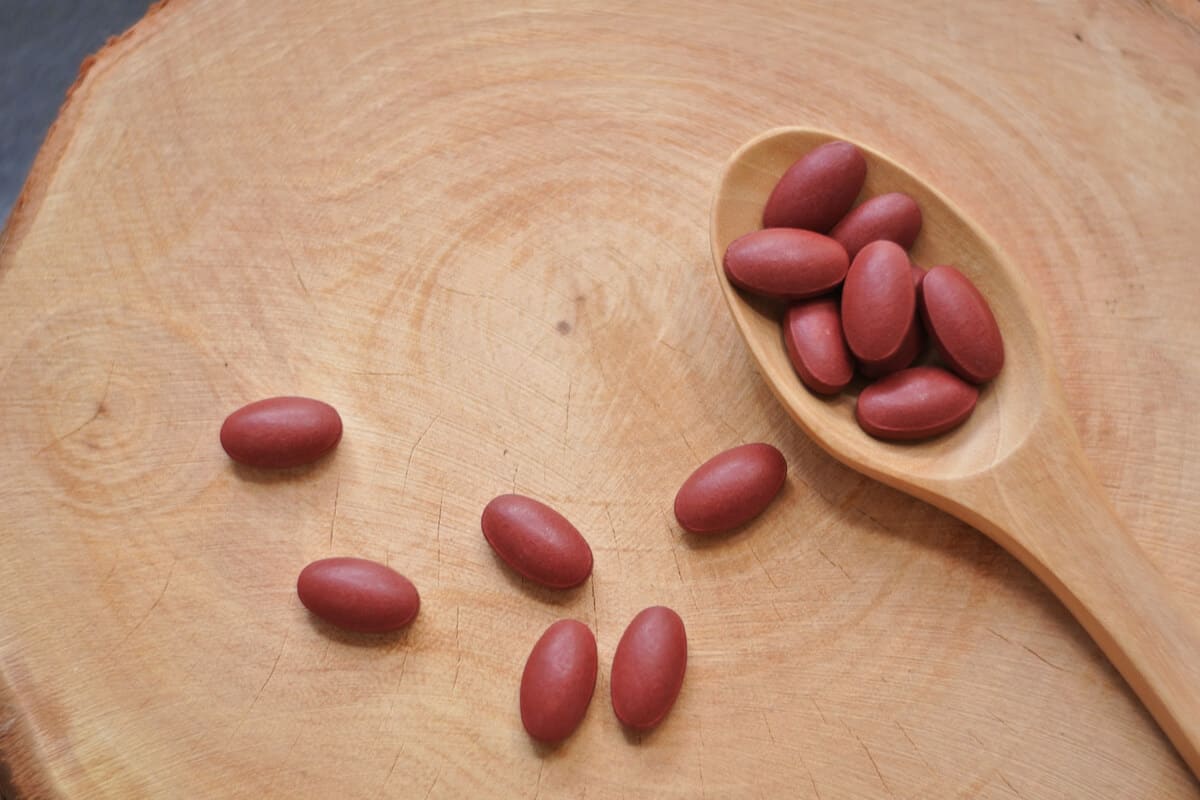 It’s essential to have proper bloodwork and a physical evaluation performed by your integrative healthcare practitioner to determine whether you have an iron deficiency before taking iron supplements, as excess iron can cause toxicity and other serious health concerns. (18) For many people taking iron supplements, their iron deficiency resolves after two months; however, your practitioner may suggest that you continue taking iron for several more months to build up the iron stores in your bone marrow. (15)

Iron is an essential mineral found in many plant and animal-based foods such as beans, legumes, meat, poultry, and seafood. Inadequate intake of iron-rich foods and certain factors such as heavy menstrual bleeding, endurance exercise, frequent blood donations, and certain gastrointestinal conditions can lead to iron deficiency anemia. In most cases, iron deficiency anemia can be resolved through dietary modifications and iron supplementation. If you suspect that you have iron deficiency anemia, speak to your integrative healthcare provider for testing and a personalized treatment plan.