Did you know that sulfur is the third most abundant mineral in the human body? (19) Sulfur assists in numerous bodily functions, including building and repairing DNA, as well as protecting cells from damage. (13) Emerging research has identified several health benefits of consuming sulfur-rich foods, including a reduced risk of developing certain chronic health conditions. Continue reading to learn more about what foods are high in sulfur and the benefits of eating sulfur-rich foods.

Sulfur is an essential mineral, meaning the body can’t make it on its own and we must consume it through our diets. Thankfully, sulfur is available in a wide variety of foods. (19) It is supplied by inorganic sulfates in drinking water and sulfur-containing compounds in foods, known as organosulfur compounds. (7)

There are two primary amino acids found in foods considered to be organosulfur compounds – cysteine and methionine. While methionine is an essential amino acid, cysteine can be synthesized by the body, making it non-essential. However, dietary sulfur is necessary for the production of cysteine. (19) These amino acids and other organosulfur compounds can be found in plant-based foods, such as vegetables, nuts, and legumes, as well as several animal-based foods, including meat, seafood, poultry, and eggs. (19)

Sulfur has long been used for several therapeutic applications in medicine. As a natural anti-microbial, sulfur is an effective treatment for certain dermatological conditions, such as acne, dandruff, rosacea, and warts. (12) Sulfur is also used in the metabolism of certain medications, including antibiotics, anti-inflammatories, and anticonvulsant drugs. (25)

While there is no recommended daily allowance (RDA) for sulfur, the health benefits of sulfur are clear, and eating sulfur foods is the best way to ensure you’re consuming adequate amounts through your diet. 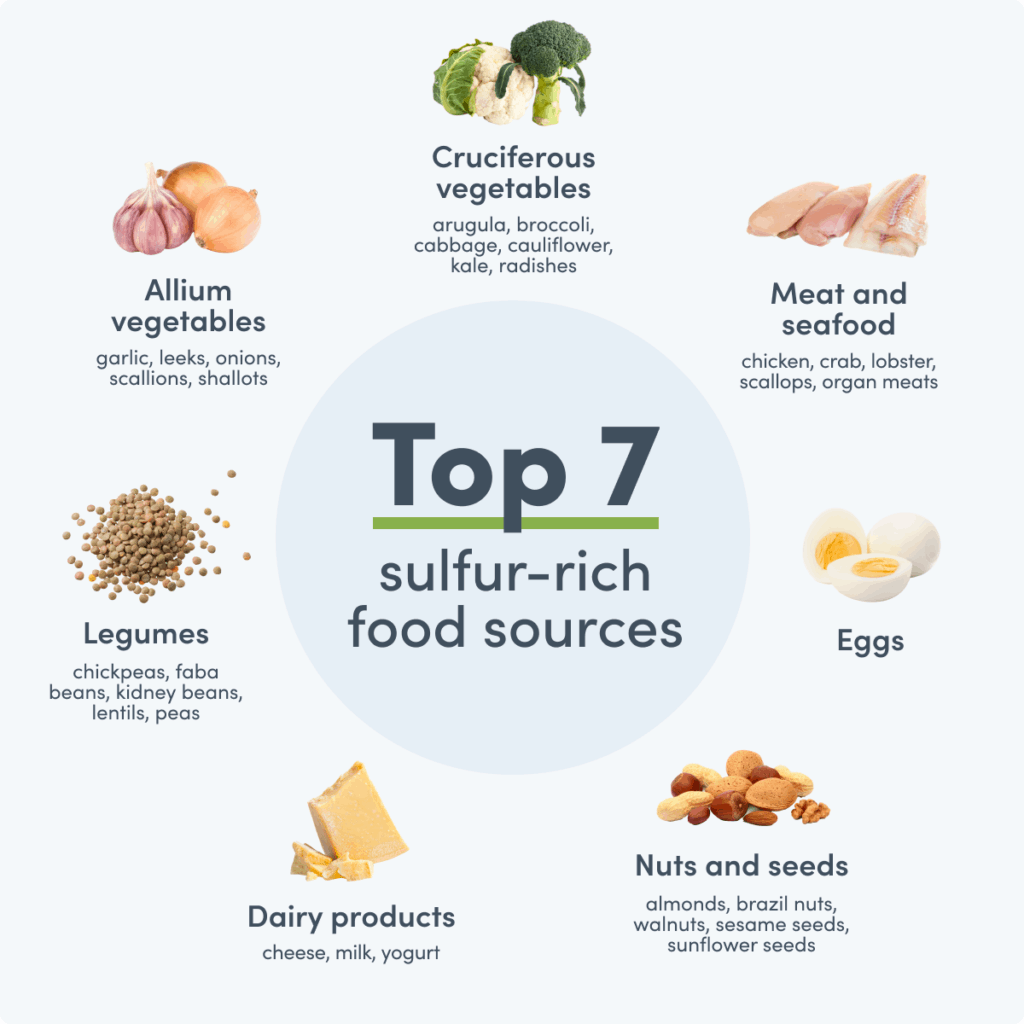 Allium vegetables, such as garlic, leeks, onion, are among the best sulfur food sources.

Sulfur is found in many plant- and animal-based foods. Eating a balanced diet incorporating a variety of foods can help ensure you’re getting enough sulfur. (19) 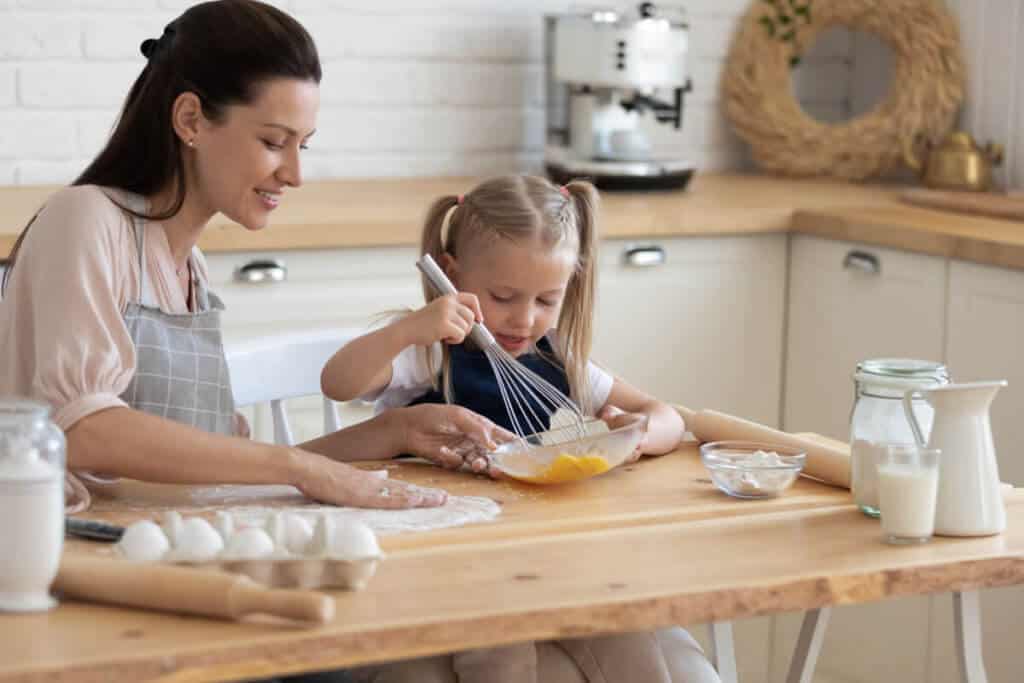 Eggs are among the highest dietary sources of sulfur, with meat, poultry, and fish also providing large amounts.

Growing evidence suggests that consuming sulfur compounds found in many foods and supplements may have anti-inflammatory effects and reduce your risk of developing certain chronic conditions. (21)(7)

Reduces the risk of cardiovascular disease

Did you know? Steaming broccoli for one to three minutes helps maximize the bioavailability of sulfur-containing compounds. (22)

May reduce joint and muscle pain

Methylsulfonylmethane (MSM) is a sulfur-containing compound found in plant- and animal-based foods and certain dietary supplements. Research has demonstrated that MSM may reduce inflammation and decrease joint and muscle pain. (6)(18) A randomized, double-blind study found that individuals with osteoarthritis-associated knee pain experienced a reduction in pain and had improved joint function following 12 weeks of MSM supplementation, administered twice daily. (16) However, research investigating the pain-relieving effects of dietary MSM is limited. 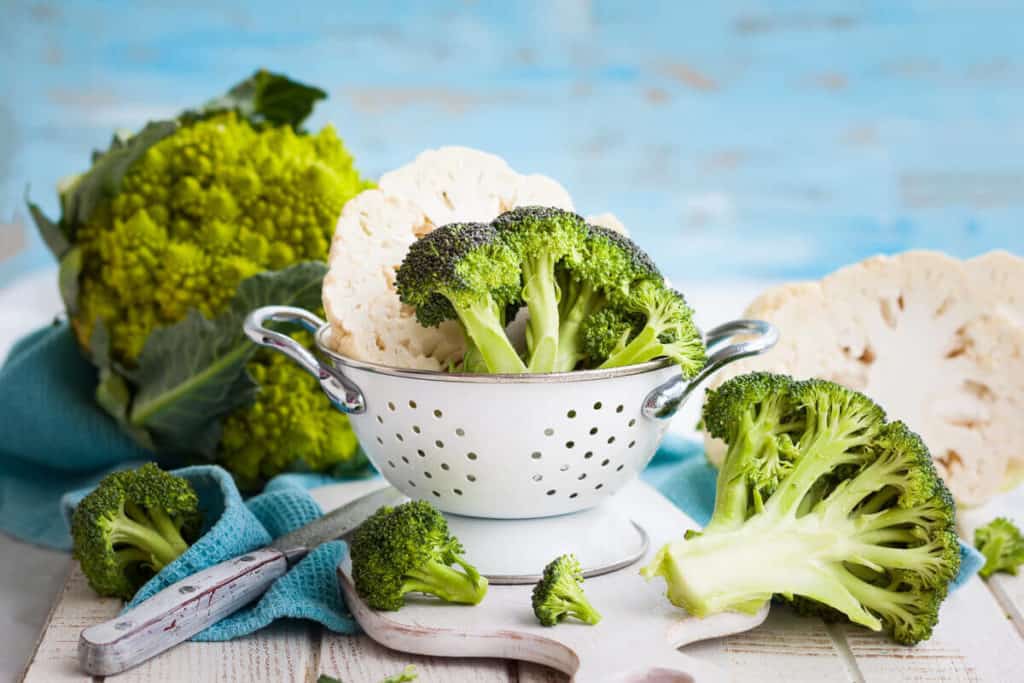 Broccoli and cauliflower are rich in sulfur-containing compounds called glucosinolates.

May be protective against certain cancers

Sulforaphane is the inactive form glucoraphanin belonging to the glucosinolate family. Found in cruciferous vegetables, this compound is recognized for its antioxidant and anti-cancer effects. (13)(10)

Allium vegetables are rich in organosulfur compounds, which may also help inhibit the growth of cancer cells in the esophagus, breasts, and lungs, according to some animal studies. (4)

Furthermore, MSM may also have anti-inflammatory and antioxidant effects, contributing to its potential anti-cancer benefits. (18) Studies have shown that MSM may help boost immune function and induce cancer cell death in colon, gastrointestinal, and liver cancers. (6) Glutathione, a powerful antioxidant that supports immune function and protects cells from inflammation, requires sulfur for its synthesis and structure. (9) Research has shown that supplementing with MSM and eating plenty of sulfur-containing foods may increase glutathione levels and encourage the upregulation of glutathione enzyme activity, as well as reduce oxidative stress that can lead to cancer. (17)(5)(2)(6)(20)

Glucosinolates have been shown to reduce the risk of developing certain neurodegenerative diseases, such as Alzheimer’s disease and Parkinson’s disease. (23) Emerging research has demonstrated that sulforaphane-rich foods may have protective effects against amyloid beta-induced oxidative damage that can contribute to the development of neurodegenerative diseases. Sulforaphane may also promote the clearance of amyloid-beta plaque buildup in the brain, potentially reducing the risk of Alzheimer’s disease. (14)

Sulfur is necessary for several bodily functions and existing research suggests a possible link between the intake of sulfur-rich foods and a lower risk of certain chronic conditions. The main dietary sources of sulfur include allium and cruciferous vegetables, animal proteins, dairy, legumes, nuts, and seeds. While there is no recommended daily allowance for sulfur, consuming a variety of these foods can ensure you’re getting plenty of sulfur in your diet.