Medicinal mushrooms have been traditionally used for protection against infectious diseases and various cancers. (3) These mushrooms have a long history of use for supporting health, particularly in early Chinese, Egyptian, Greek, Mexican, and Roman cultures. (4) In fact, in 1991 a 5,300 year-old mummy was discovered carrying birch polypore fungus, which exerts a purgative effect and may have been used to treat the mummified person’s intestinal parasites. (1)

Modern research has shown that medical mushrooms provide a rich source of nutrients and bioactive compounds that are associated with several health effects, including supporting the immune system. (20) Read on to learn more about medicinal mushrooms, their health benefits, the top mushrooms for immune support, and how to consume medicinal mushrooms.

What are medicinal mushrooms?

Medicinal mushrooms are edible macroscopic fungi (visible to the naked eye) that are used for their beneficial health properties. (15) Fungi, which include yeasts, molds, and mushrooms, live on the dead matter found in soil or on plants, animals, and other fungi. (4) There are an estimated 14,000 to 22,000 known species of mushrooms worldwide, (14) of which approximately 20 to 30 are cultivated edible species and approximately 15 species are wild-foraged for consumption. (4) These mushrooms may be consumed as functional foods or as dietary supplements. (15)

Mushrooms are a source of many nutrients, including fiber, protein, selenium, and potassium, as well as the vitamins B1, B2, B12, C, D, and E. (20) Additionally, they possess several bioactive components, such as alkaloids, flavonoids, (20) terpenes, phenolic compounds, polyunsaturated fatty acids, and polysaccharides. (16) Notably, β-glucan, a polysaccharide commonly present in mushrooms, has been studied for its immune-stimulating and prebiotic properties. (10) 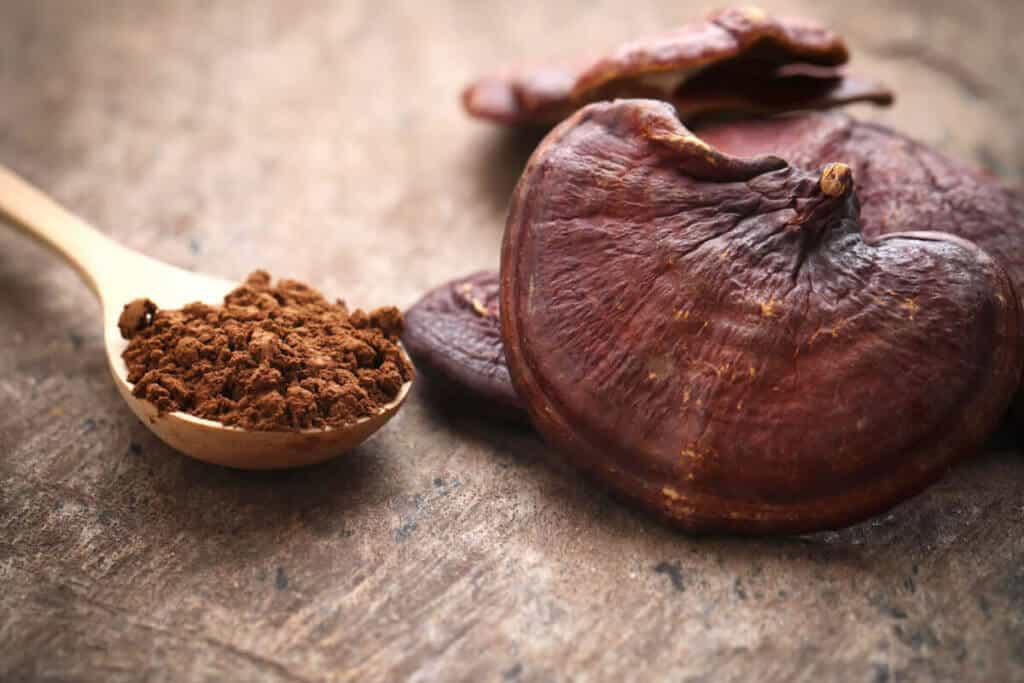 Mushrooms may be consumed in a variety of ways, including as a dietary supplement in powder, capsule, or liquid extract form.

To date, much of the research on medicinal mushrooms is based on animal or in-vitro trials. However, some early clinical trials suggest that mushroom intake may reduce the risk of breast cancer, (4) and may improve cancer-related symptoms, such as insomnia and sweating. (14)

Read about ways to keep your immune system strong on the Fullscript blog.

The top 8 mushrooms for immune support

Outlined below are eight of the top mushrooms with immune-supportive properties.

Chaga mushroom, also referred to as birch mushroom and chaga conk, is a dark brown and black fungus that grows most often on birch trees. Several compounds found in chaga may result in its beneficial effects, including anti-oxidant polyphenols, as well as betulin and betulinic acid, which are associated with anti-cancer effects. (6)

Though not technically a mushroom, cordyceps is a rare caterpillar fungus that grows only in high-altitude regions of Sikkim, a state in northeast India. (14)(18) The bioactive components in cordyceps include polysaccharides, cordycepin, and cordycepic acid. An eight-week study in healthy Korean individuals found that supplementation with cordyceps extract was associated with increased activity of natural killer immune cells (NK-cells). This change was accompanied by improved immune regulation compared to controls. (12)

Hericium erinaceus is commonly known as lion’s mane mushroom due to its white, fur-like appearance. Animal models have demonstrated that lion’s mane may promote beneficial gut microbiota growth and be associated with reduced colon tissue damage in cases of inflammatory bowel disease (IBD). The researchers suggest that lion’s mane may help regulate the immune system and improve the health of individuals with IBD, however, clinical trials are needed to confirm this in humans. (2)

Maitake is a culinary and medicinal mushroom that has shown anti-cancer activity on breast cancer, melanoma, and hepatoma cells in animal studies. Proteoglucan, a component of maitake, has been associated with the immune-stimulating effects of the mushroom. In mouse models, proteoglucan has been shown to decrease mammary tumor cell behavior. (10) Further, in in-vitro and animal studies, polysaccharides found in maitake have been shown to exert anti-viral activity against hepatitis B and human immunodeficiency virus (HIV). (8)

Oyster mushrooms are a genus of fungi that include several species, such as Pleurotus ostreatus and Pleurotus florida. (5) In vitro research has found that the polysaccharides present in P. ostreatus mushrooms may activate NK cells against lung and breast cancer cells. (3) Additionally, an extract of P. florida, which contains a number of active components, including phenolics, flavonoids, and polysaccharides, was shown to have anti-inflammatory and analgesic effects in animal models. (5) 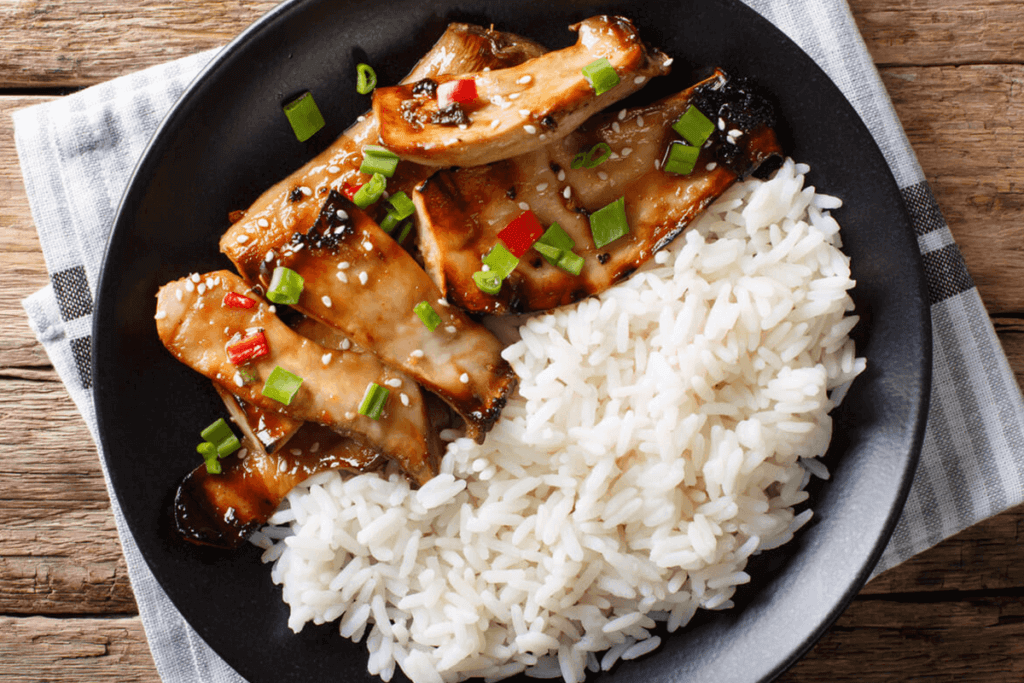 Culinary mushrooms such as oyster, shiitake, and maitake have beneficial properties.

Reishi is commonly referred to as the “king of mushrooms” (5) or the “mushroom of immortality”. (20) It has been shown to prevent or treat various diseases (20) and modulate the inflammation associated with a high-cholesterol diet. (5) The health effects of this mushroom may be a result of its ability to regulate microbiota composition, as the polysaccharides found in reishi demonstrate prebiotic effects and may increase counts of beneficial bacteria in the host. (5)

Shiitake mushrooms have been traditionally used to treat conditions such as the common cold. A four-week clinical trial suggests that shiitake intake was associated with favorable changes in secretion patterns of various immune compounds. These changes may indicate an improvement in gut immunity and an anti-inflammatory response. (4) As with many other mushroom varieties, shiitake may have anticancer effects. Lentinan, which is a glucan derived from shiitake, is currently used as a complementary treatment for tumors, particularly in China and Japan. (14)

The turkey tail mushroom obtains its name from the tan and brown rings on its surface, similar in appearance to the tail feathers of a turkey. (19) In traditional medicine, turkey tail has been used therapeutically for fungal infections, cancer, and acquired immunodeficiency syndrome (AIDS). (10) Contemporary research in animal models of breast cancer suggests that C. versicolor exerts an anti-tumor and anti-metastasis effect, indicating that it may reduce the risk of developing secondary cancerous growths. Polysaccharide-K (PSK), a proprietary formulation of turkey tail, is approved in Japan as a complementary cancer treatment. (19) A 2007 meta-analysis of over 8,000 patients conducted by the Kyoto University Graduate School of Medicine in Japan found that PSK in combination with chemotherapy increased the survival rate of patients following gastric cancer resection. (17)

How to consume mushrooms

Medicinal mushrooms are available as dietary supplements in several forms, including as liquid extracts, powders, and capsules. Culinary mushrooms, such as maitake and shiitake, may be used in dishes such as soups, stews, stir-fries, pasta, and omelettes.

Tea is also commonly made from whole fresh or dried mushrooms. A tea can be made by steeping from three to ten grams of mushroom pieces in hot water for approximately five to ten minutes. Mushrooms that are woody and dry, such as reishi or chaga, may need to be steeped for longer or boiled. As it does have a strong taste, some individuals prefer to add a sweetener such as honey to the tea.

Mushroom species that have been identified as edible, such as those included in this article, are generally considered as safe for consumption. However, high-quality clinical research is required to determine effective dosing and safety of mushroom supplements in humans. (4) It’s important to note that medicinal mushrooms differ from psychoactive species of mushrooms, such as the liberty cap (Psilocybe semilanceata), which contains psilocybin, a known hallucinogen. Additionally, certain wild mushrooms contain toxins that are poisonous to humans and pets. A mycologist or qualified mushroom forager should be consulted to help identify species of mushrooms that are safe for consumption. (4)

Medical mushrooms are available in several forms and have been shown to benefit immune health. If you’re a patient interested in consuming mushrooms for their therapeutic properties, we suggest speaking with your integrative healthcare practitioner.